Paint on the Mac desktop: Presentify and ScreenNote add drawings to presentations 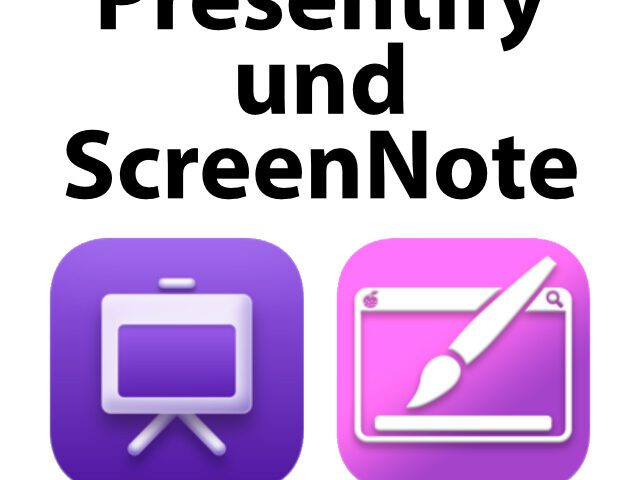 In the office, university and school, in addition to PowerPoint or keynote presentations, whiteboards, flipcharts, blackboards and handouts can also be used to highlight content. But if you give a lecture from your home office or home schooling, explain the quarterly figures or present something important in a meeting, it becomes difficult. However, there is help to highlight certain points on the Mac, to enhance what has been said with a drawing and so on: Presentify and ScreenNote are two Mac apps that let you paint on the macOS desktop.

Paint on the Mac desktop during the presentation, screen sharing or lecture: Presentify and ScreenNote help highlight, draw and write on the current display.

With the Presentify app, you can turn your Mac desktop into a digital whiteboard, on which you can draw something, outline or circle certain things and point at something with arrows. There are different colors to choose from, so that the screen transmission remains clear even when using several highlighting and borders.

Furthermore, the cursor can be highlighted, which z. It is useful, for example, if you - for example in an online workshop - explain the use of an app step by step and want to show where to click. You can find the Presentify app for Apple computers with macOS 10.13 or newer for 5,49 euros in the Mac App Store.

ScreenNote can also be used to bring borders, drawings and markings onto the Mac desktop. Not only the color, but also the line thickness and the opacity can be selected. I. E. the objects do not have to completely overlay the marked. ScreenNote can thus be used as a highlighter for presentations, workshops or other screen transmissions.

The tool is shown and hidden by pressing both command keys (cmd). Text is first entered in a text field and then dragged to the correct size on the desktop using the mouse. In the short test, it all worked very well. That's why I understand the bad reviews of the free app in the Mac App Store not really. The software runs on macOS 10.13 and newer.

By the way: The developer Takuto Nakamura offers other productivity and presentation aids in the App Store, for example Measurist. And while looking for that link, I noticed that we had ScreenNote back in 2018 considered with a contribution had. Since then, a lot has happened, which is why the reassessment after more than 2,5 years is not so bad: D