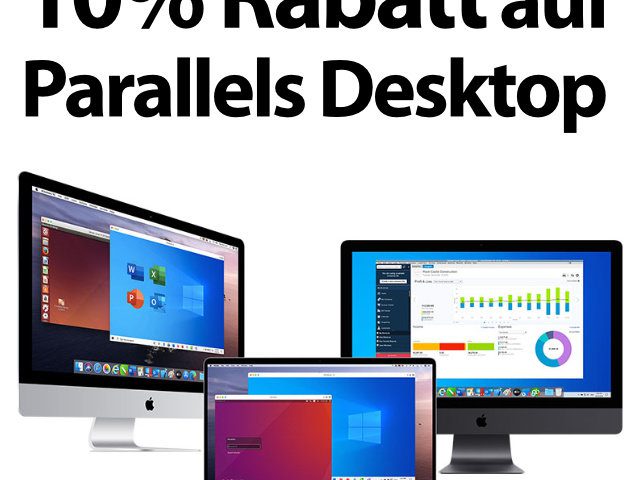 With Parallels Desktop you can use Windows in a program window under macOS on the Mac. Parallels Desktop 16 is compatible with macOS 11.0 Big Sur and enables the direct exchange of files and folders between the Apple operating system and Windows with just a few clicks. The fast software, which promises a good workflow with both systems at the same time, works with Windows 10, 8.1 and 7. Individual adjustments to your own use (development, games, productivity, etc.) can be made with one click. Thanks to the discount code mentioned below, you will receive a 10% discount.

Get a 31.10.2020% discount on Parallels Desktop with the following code until October 10, XNUMX and buy the VM software for Windows on your Apple Mac at a lower price!

The deal is still valid up to and including Saturday, October 31, 2020. You can redeem the necessary discount code D75-M6L-CCJ via this link to the product website. There you will not only find the option to buy Parallels Desktop 16. All advantages including screenshots and animations are also presented there again. You will also find a note on the different versions of the software. The discount code shown is valid for these versions:

This question is addressed by the developers in a small Video explained, which was uploaded to YouTube in August. There are more demonstrations of the virtual execution of Microsoft Windows on the Apple Mac on the corresponding YouTube channel. For example, a week ago a video was uploaded showing how to use Parallels Desktop on a Mac to play the Definitive Edition of Age of Empires III. But other topics that differ from gaming are of course covered with instructions and tutorials;)