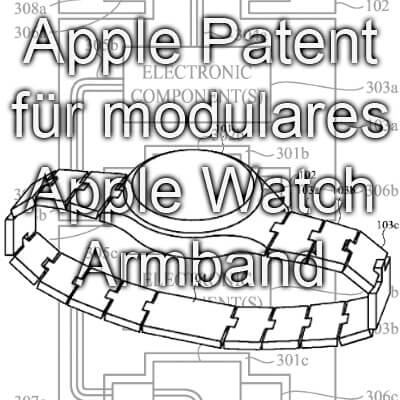 On Tuesday yesterday it has United States Patent and Trademark Office Apple a new patent for the Apple Watch promised, in which it is about smart links for the Bracelet the clock goes. Will the link bracelet be back in fashion with the Apple Watch Series 3? And which components or optional modules could be hidden in the links of the bracelet - perhaps your own SIM card?

The Apple Watch Series 3 or Series 4 could come with a modular bracelet. Electronic components, connections, batteries and sensors can be located in the individual links of the tape. The newly awarded patent brings some opportunities for Apple to expand the wearable sector.

The patent was filed by Apple Inc. of Cupertino, California on February 17, 2015. On Tuesday, January 24, 2017, the plans, declarations and drawings were registered as a US patent number 9,553,625 Awarded Apple. In addition to gesture control, that too bagged as a patent the perhaps modular technology of the new Apple Watch is now a sign of even more innovation. Personally, I would be more pleased about a smartwatch that can be expanded with a bracelet than one that you have to wiggle around to operate;)

Apple Watch Series 3 or 4: modules in the bracelet

Perhaps gesture control and modular wristbands go hand in hand (or wrist to wrist), because the space for sensors, processors and everything else in the small Apple Watch is limited at some point. Even if everything is getting smaller and the trend is towards SoC. But maybe SoC systems will also be used in the links of the new Apple Watch, making it the most powerful smartwatch on the market - Apple could be trusted. Maybe you can also put a nano SIM in the bracelet ...

These sketches speak for the individual, user-adaptable construction kit or puzzle character (red) of the new Apple Watch bracelet. Whether sensor, camera or connection for peripherals: modules and components (blue) from third-party providers are also possible. Instead of MFI it is called MFW, also Made For Watch;)

Longer battery life thanks to small batteries in the modules?

A patent belongs to nine-page pamphlet made from sketches - on page eight you will find a sketch showing a module labeled “Battery”. However, it has not been clarified whether this is a drawing that shows the power supply to a single link of the Apple Watch bracelet, or whether this could also result in an extension for the Apple Watch battery. Regardless of their final use, the small batteries could possibly be charged by photovoltaics. Solar energy could be collected by collectors in the wristband of the Apple Watch - a theory suggested by, among others AppleInsider.com is expressed.

According to AppleInsider.com, there are a number of ideas that Apple could squeeze into the bracelet of the Apple Watch. Photovoltaic cells, generators for electricity, cameras, loudspeakers, batteries and much more. Sensors for measuring body values ​​could also be implemented and would make the Apple Watch an even more powerful fitness bracelet.

Which modules do you find the best?

Whether just a new bracelet or a completely new Apple Watch series - which modules and components should there be for the wearable from Cupertino? Do you tend towards cameras, loudspeakers and flashlight LEDs; to batteries, photovoltaic or solar units and the like; and / or to connections for the connection to Mac and MacBook, to (foldable) screens or something completely different? Feel free to leave a comment on the new one Apple patent 9,553,625 there ;)