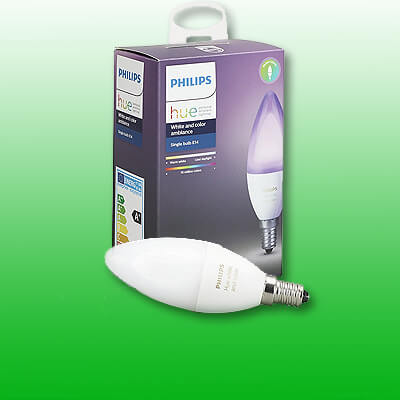 If you are fans of Smart home technology then you are sure to enjoy the ever wider product ranges from suppliers and brands such as Philips Hue; for example about the new one Philips Hue E14 LED candle. Sure, there is too E27 to E14 adapter for the Philips Hue light system, but just like on the computer, adapters and other helpers always ensure an improvised, clunky appearance - nothing that you absolutely want in a modern household. That's why you can now pre-order the Philips Hue E14 LED candle. It will be available from April 10, 2017.

Modern LED lightbulbs, LED candles and similar lighting elements with LEDs can deliver a rainbow of colors through the various combinations of the individual basic colors as well as by dimming or strengthening the respective elements. In addition, stepless dimming is no problem with these smart home solutions. And so there is always the right light for the right mood with the new Philips Hue E14 LED candle. This is ideal not only at home, but also in gastronomy: bright wake-up light in the morning, warm daylight at noon, romantic lighting in the evening - and all of this via iOS or Android app.

Screw in the light bulb and start using the app right away? Unfortunately this is not possible. If you want to use the presented or similar bulbs from Philips Hue, then you also need the so-called Philips Hue bridge (Product page). This central control unit ensures that you can control and control the individual smart home elements of the system. Then they are also compatible with Alexa, Amazon's voice assistant that you can use via Amazon Echo or Amazon dot can address. By the way, there is also one for everyone interested Starter sets, which in addition to the Philips Hue Bridge already bring some LED lightbulbs.