Photos app on Mac does not update via iCloud Photo Library

For a few days now I've been fighting with my Photos app on the Mac (no, not because of Catalina, but still under macOS Mojave!). Why? Because it stiffly claims it would "update" but it doesn't.

I use the iCloud Photo Library and actually enjoy the fast syncing that brings photos I took with the iPhone to my Mac and iPad in seconds.

Unfortunately, exactly this "transferring" into the photo app on the Mac has not worked properly for several days. While the Photos app says it is being updated at the bottom, nothing happens for hours.

If the Photos app on the Mac no longer wants to receive photos from the iCloud, this tip might help.

Now, this problem can be caused by several causes, ranging from incorrect settings to unreadable files in the photo library. The recommendations range from repairing the photo library (hold down CMD and ALT when starting the Photos app) to restarting the iPhone and Mac.

For me, it was ultimately a different approach that helped. I think my hard drive was causing the sync to stop working. I've moved the photo library to an external hard drive and the Photos app is usually open for me all day long. So far so good.

I suppose it was because my hard drive lost connectivity at night while the Photos app was running.

Now I got to my Mac this morning and it said in the top right corner that the photos app had to be closed because the photo library was no longer accessible or damaged.

The reason for the message was obviously that the external hard drive logged off for a short time last night. The background process, which is always looking for new photos in the iCloud on the Mac, does not seem to have coped with this and has quit its service without terminating or crashing.

In the meantime, I have restarted the Photos app several times, but this did not help, as the process also survived closing the Photos app. Correspondingly, this procedure did not bring any improvement for me either. 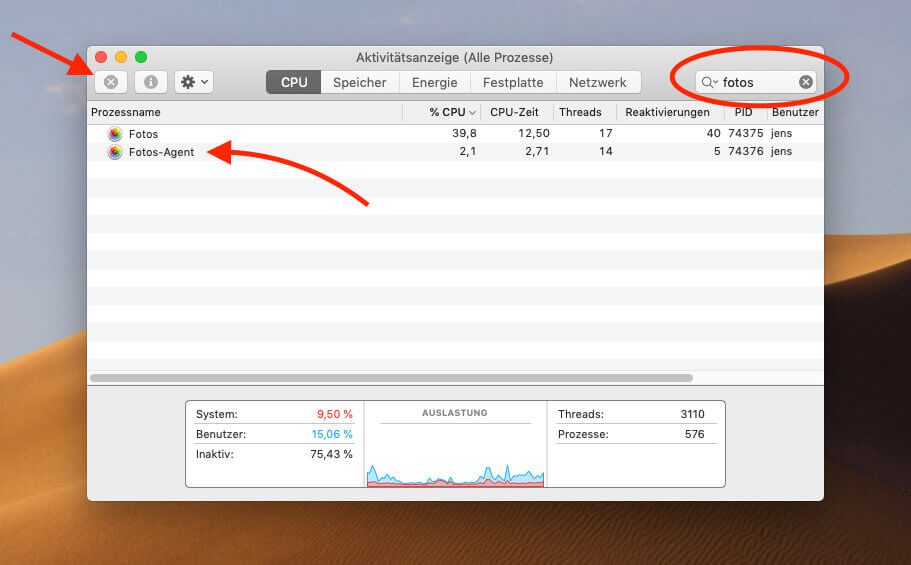 In the activity display, look for "Photos" or "Photos" (in the English system setup), then select the "Photos Agent" process and close it with the cross at the top left. 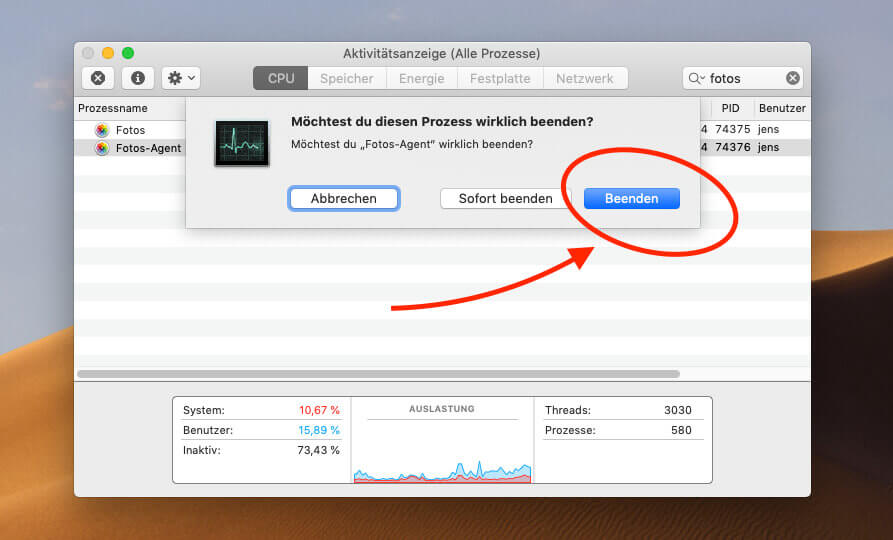 If you end the process with the X symbol, you will be asked again whether you really want this. This is confirmed with the "Exit" button.

I finally found the successful solution to my problem in the forum of stackexchange.com. In it, a reader described that you have to end the "Photos Agent" background process and restart it in order to get it going again.

But my complete guide is this:

In my case, even after restarting the "Photos Agent" process, no photos were synchronized. Only after I unlocked the iPhone and started the Photos app did the photos arrive on the Mac after a few seconds.

This is how it should look when the Photos Agent resumes its service and the first photos arrive on the Mac.

It may be a coincidence that this happened because the process was supposed to be running all the time in the background and sending the new photos to the cloud, but maybe it was important. That is why I would like to describe my exact procedure.

If you also have problems with the photo sync and iCloud, please leave a comment. Maybe we can find the solution together.