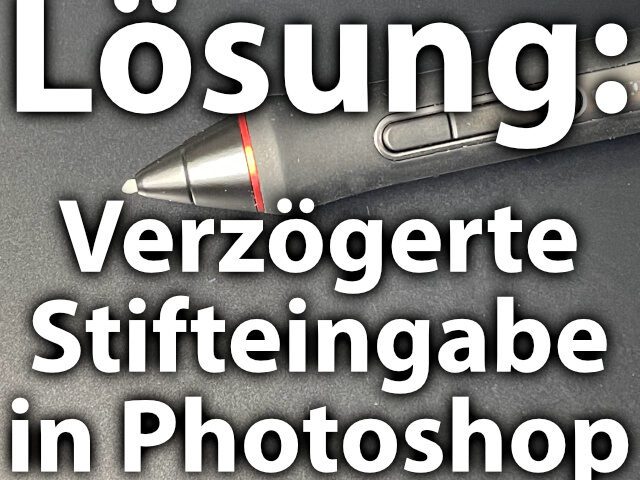 After updating Windows or playing around with pen input or "Windows Ink", it can happen that the stylus is used in Photoshop with a delay. When drawing a line or a shape, the first pixels are not colored and the intended beginning of the drawing remains blank. In addition, unwanted inputs (click, double-click, right-click) can result from simply pressing the stylus on the graphics tablet, which is also annoying. If the pen input is delayed in Photoshop on Windows, you can find a possible solution here - for example for using the Wacom Intuos Pro.

If the pen input is delayed in Photoshop, you can find the solution here (tested under Windows 10). The line drawn with the graphics tablet and stylus is brought back onto the plane from the first time the pen is put on and from the first pixel.

Solution for Photoshop: Delayed pen input on the graphics tablet under Windows

I got the error yesterday while drawing on the Wacom Intuos Pro graphics tablet. I use the Wacom Pro Pen 2019 on the 2 model and I hadn't changed any of the tablet or stylus settings. As far as I can remember, I hadn't adjusted anything in Photoshop since the last time I made a digital drawing. So it had to be some Windows setting. After a few attempts in the individual menus, however, there was no improvement.

A little detour then helped. I found this solution in an English-language forum, in a year-old thread. Nevertheless, the whole thing worked for me under Windows 10, which is why I want to share the procedure with you. And it looks like this:

Then save the file and close it again. If you now open Photoshop again, the pen input on the graphics tablet should be accepted again from the first time you put the stylus on. In any case, it worked out when trying it out with the Wacom Intuos Pro.

Notes: Instead of the three dots (...) after "Adobe Photoshop" in the path shown above, the version you are using is shown. So the CS version number of the old paid or new subscription version. If you cannot find the “AppData” folder in your user folder, you must first display the hidden files and folders. This is done via the folder settings.