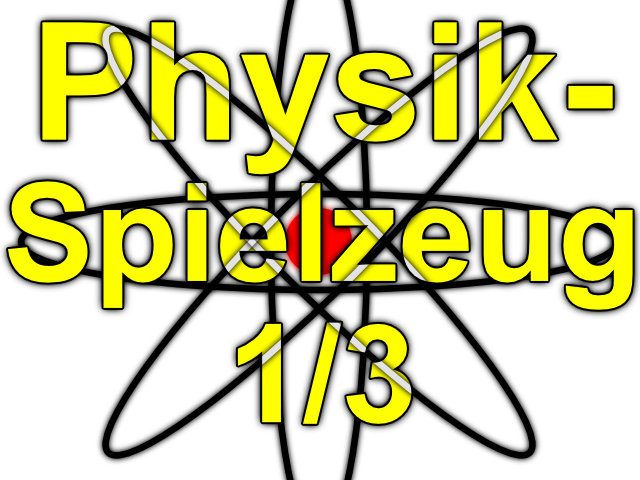 In order to be able to immerse yourself in the world of science and technology, you need a certain amount of enthusiasm in addition to dull school knowledge. This only arises when processes can be observed and experiments can be carried out by hand. That's why I have put together various fascinating physics toys for children and adults for you in this post, which are super suitable as a Christmas present, as a birthday present or simply to illustrate effects and scientific rules. For full understanding, I have also packed the meaning behind each toy.

Fascinating physics toys for children and adults - in the first part of the series of articles I will introduce you to the Euler disk, Feel Flux, the Stirling engine, the light mill and the swallowing woodpecker.

At Amazon simply and without much product description offered as Euler's Disk, the sense of this physics toy may not be immediately apparent. The experiment set-up, also known as the Euler disk or Euler disk, consists of a mirror and a heavy plate with polished stainless steel edges. Unlike a coin that you flick on the table top and which lies down after a brief turn, this disc continues to turn, even picks up speed and becomes audibly louder in the process.

The physical problem of the energy dissipation of a disc that has hardly any friction while rotating on a surface is shown. There is also some information at Wikipedia .

Even with that Product called Feel Flux there is no clear information on the usefulness. However, there is a reference to "Lenz's Law" in the poorly translated product description. This means Lenz's rule (or: Lenz's law or Lenz's rule), which deals with electric current, which is given its direction by electromagnetic induction. However, the toy does not deal with current measurements, cables and so on, but with the effect that a metal cylinder creates in interaction with a magnetic ball.

As can be seen in the video, the experiment setup slows down the ball falling through the cylinder, or better: it floats. If the physical principle behind it has been understood, you or your children can use the physics toy for magic tricks;) 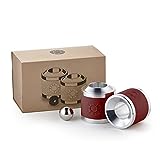 Feel Flux
The Feel Flux cylinders with the ball not only show a physical effect and make the explanation clear. The product is also suitable as a game of skill or magic equipment.
72,73 EUR
Buy it at Amazon Price includes VAT, plus shipping costs (updated: 24.05.2022 at 04: 00 clock)

A Low or low temperature Stirling engine does not reveal itself immediately either, although it is a little more clearly understandable than, say, an Euler disk. The small device illustrates the laws of thermal energy and is powered by being placed on a heat source - for example on a mug with a hot beverage. The wheel turns by a piston that realizes the heat exchange in the base of the body by pushing (or "starting") the engine once again. Here is a video about it (preferably turn it down if you are using headphones) :

A test setup like the one in the video can be ordered directly from Amazon. You can find more videos on the topic on YouTube, including explanations of structure and the like. But these are sometimes quite lengthy. Scientific details on the Stirling engine are also provided Wikipedia .
3,47 EUR

One too Light wheel or radiometer Some of you may already know the light mill - from your physics class, grandma's sideboard or the nursery of a child interested in physics. The experimental setup consists of a glass ball with negative pressure in which an impeller is located. Its "wings" are small plates that are colored black on one side. When the light falls, the wheel begins to turn.

The occurring effect is due, among other things, to Brownian molecular motion and the law of conservation of momentum. If you want to explain to yourself or your children how the light mill works, you will find all the information you need in this wiki post.

The classic rocker, swallowing woodpecker or drinking bird is a well-known physics toy for children and adults. If made entirely of glass (with cloth beak) or in the feathered version with cylinder (e.g. as a New Year's Eve gag) - this funny toy also shows thermal laws. Evaporation, negative pressure, steam and water; everything just comes together here. This video shows (again with unnecessarily loud music) the toy in action:

The physical background of the excessive drinking behavior of this bird can be seen among other things this wiki article learn to understand. But maybe trying instead of studying will help;)
-