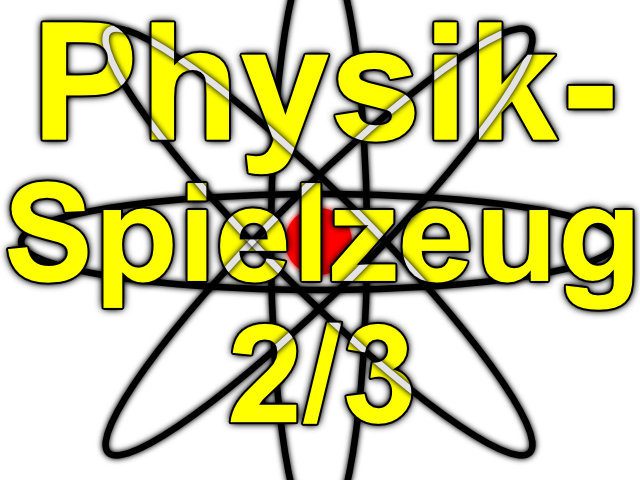 Science, technology, playing and learning - all of this can be realized simultaneously for children and adults with the right physics toy. in the first part of the series I've already introduced you to the Euler disk, the Feel Flux cylinder, a low-temperature Stirling engine, a light mill and the classic Schluckspecht. In this second part, too, I'll show you five physics toys for children and adults, which can be used to better understand and explain physical processes, rules and problems. If available, there is also a YouTube video and further links for each product;)

In the second part, about fascinating physics toys for children and adults, there is the wobbly wood and the tunnel mirror as well as the swinging sticks, the kinetic atom mobile and the helicone.

A Tunnel mirror or infinity mirror is a commercially available mirror at first glance, which can also be used as such. In addition to the physics toy, you also get a functional item for the bathroom. However, if you switch on the built-in LED lights, a phenomenon from the field of optics arises: a tunnel appears to be created as the lights are reflected almost endlessly in the mirror. There's the whole thing too as a table.

Such a tunnel mirror is of course not rocket science. It consists of a fully reflective mirror and a one-way reflective mirror. Partly from a mirror with a glass plate above it. In between, the LED lights are attached to the edges. The tunnel effect results from reflections.

Swinging sticks became popular with the Marvel film "Iron Man 2" at the latest. There are different physical approaches behind the two elements of the physics toy, seemingly endlessly rotating, and there are different physical approaches: on the one hand electromagnetism, on the other hand different kinds of energy laws. With this physics toy for children and adults everyone can learn something more. Here's the original: Swinging sticks.

Of course, you can also set up the swinging sticks as desk decoration or in a waiting room. There are many decorative uses of the relaxed swinging mobile.

Swinging sticks table decoration
With the swinging sticks, magnetism, kinetics and energy can be observed and understood. The use of batteries is used to generate an electromagnet.
98,00 EUR
Buy it at Amazon Price includes VAT, plus shipping costs (updated: 18.10.2022 at 00: 35 clock)

A Helicones is a collection of wooden plates on a centrally mounted pole. You can turn this either in your hand or when it is in a foot section made for this purpose. The result is either a seemingly random pattern or - if you turn in the other direction - a double helix. According to the description of the following video, the physical toys for young and old are based on the Fibonacci sequence and the golden ratio.

The product certainly makes sense if one delves deeper into the underlying processes and laws. It is also a nice decoration. I wouldn't buy it as a mere toy, as basically only two “patterns” can be created, which children quickly get bored of.

Helicone from Playable ART
Such a helicone not only looks beautiful, it can also be explained scientifically. In addition to the terms mentioned above, the broad field of rotation is of course also an issue for this toy.
117,00 EUR
Buy it at Amazon Price includes VAT, plus shipping costs (updated: 18.10.2022 at 00: 35 clock)

A kinetic mobile is an arrangement of spheres that swing and rotate in certain patterns attached to a pendulum. Sounds complicated, but it is not. For example this Atom Kinetic Mobile consists of the magnetic pendulum and three ball arrangements. These are three spheres attached in a circle around a pivot point, which are supposed to represent atoms in a very simplified way.

Similar to the swinging sticks, magnetism, kinetics and rotation can be explained and observed here. A 9 volt block (LR61) is required for operation.

Atom Kinetic Mobile
The Atom Kinetic Mobile is a toy and a decorative item in one. The physics toy for children and adults is used to explain and visualize various principles and rules.
29,77 EUR
Buy it at Amazon Price includes VAT, plus shipping costs (updated: 18.10.2022 at 00: 35 clock)

The Wobbly wood is the last and cheapest representative for this part of my list of fascinating physics toys for children and adults. A wobble stick is a shuttle that can be turned in one direction without any problems; turned in the other direction, however, begins to stumble, i.e. to wobble. Depending on the initial speed, the wood stops and then continues to rotate in the "favorite direction". Super cheap, but not that nice this model.

The Wikipedia article describes how a wobble stick works Kinetic rocking stone received. The English term rattleback is also used here. In short: it is about asymmetrically distributed mass and imbalance;)

Rocking wood with imbalance
What does the mass of a body, distributed in a certain way, mean for its ability to move? You can answer this question with a rocking stick, rocking stone or rattleback.
Buy it at Amazon Price includes VAT, plus shipping costs (updated: 18.10.2022 at 00: 35 clock)