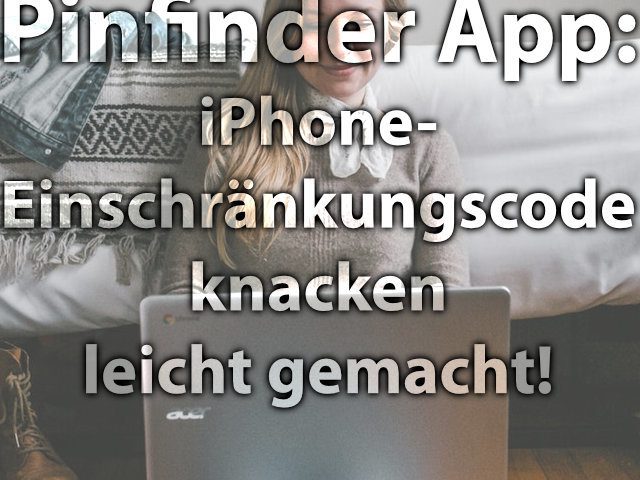 If you have a Restriction code set, i.e. a four-digit sequence of digits to restrict actions, then you may well forget it at some point. For example, if you have set up the smartphone for the children and blocked various applications, options or downloading software with the code lock, this can happen. To find or reset the numeric code, if you can no longer remember it, you do not necessarily have to go to Apple Support. The free Pinfinder app for Mac, Windows PC and Linux computers provides the same service.

With the Pinfinder app for macOS, Linux and Windows you can crack the restriction code with an iOS backup or bypass the parental controls. This works with Apple iPhone, iPad and iPod Touch.

The Pinfinder app is not used directly on the iPhone, but uses a locally stored backup on your Apple Mac, iMac or MacBook or on your Windows PC / laptop or Linux machine. A simple brute force attack is used there to try out the 10.000 possibilities of the code from 0000 to 9999. Once the tool has found the four-digit code with which you have secured the Apple smartphone against in-app purchases, against various multimedia content, against the deletion of certain apps and so on, you can enter it again on the iPhone to save the Unlock.

You can find the Pinfinder download for macOS, Windows and Linux on the developers' site, among other places pinfinder.net as well as on GitHub. The software runs locally on your own machine and, according to the developers, does not transmit any data anywhere. What you need in addition to the app is an iTunes backup from the iOS of the locked device. In addition to the iPhone, you can also crack the restriction code of an iPad or iPod Touch. The program should work with backups from iOS 8 to the latest version of iOS 11 - including iPhone 8 (Plus) and iPhone X as well with the new iPad.

PIN poop on iPhone, iPad and iPod Touch does not work

Even if the name "Pinfinder" suggests that you can find the PIN of the mobile device with the software, this is not the case. The brute force method for cracking the four-digit sequence can only be used for parental controls. So if you have access to a third-party iOS backup and want to read out the PIN of your iPhone, iPad or iPod Touch with the Pinfinder, then you can withdraw the thought right away - you won't get the PIN number that way;)

Recommended reading: Forgot your PIN and PUK - this is how you can unlock the SIM card