PING if you care! Heatmap shows critical points for cyclists in Brussels 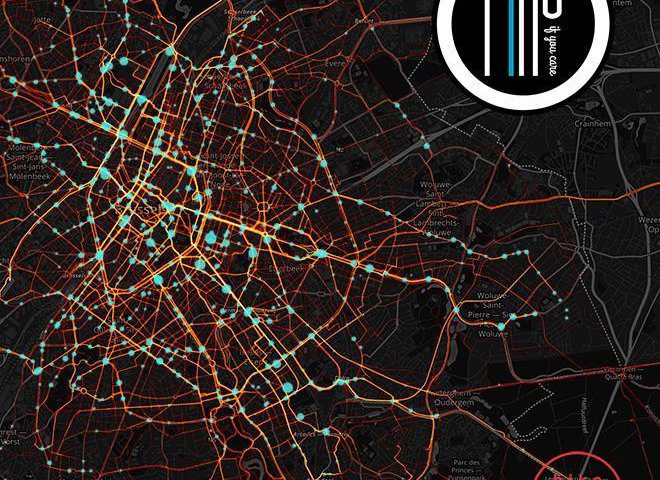 The Austrian company Bike Citizens did in collaboration with the Dutch organization Mobile 21 in Brussels, Kingdom of Belgium, the campaign PING if you care! and recently an interim balance sheet was drawn up: Since the end of May 2017, cyclists in Brussels using the corresponding app have introduced over 6.000 routes into the system and marked more than 15.000 places on these routes as critical, confusing or dangerous. The marking of these places is carried out by the so-called. PING button of the App realized, resulting in the campaign name.

Bike Citizen app for cyclists all over the world

The then bicycle messengers Daniel Kofler and Andreas Stückl founded the company back in 2011 Bike Citizens in Graz, Austria. With currently more than 35 employees in Graz and the German capital Berlin, ambitious goals are being pursued: Cycling in urban surroundings should be made more attractive and safer. With our own products - also and especially digital - the quality of life in cities should increase; with and for cyclists.

iPhone on the bike: Quad Lock for iPhone 6S (Plus) / For iPhone 7 Plus

The PING if you care!

PING if you care! is a campaign in Brussels funded directly by the city's Cabinet DeBaets. The determined data, which has been collected since May 2017, is continuously forwarded to this point. The campaign will run until November; by then, the currently more than 15.000 PINGs will surely increase.

The individual and repeated reports are also intended to ensure that cyclists do not have to go to different locations online and offline and skip different platforms. With PING if you care! Bike Citizens and Mobiel 21 have a direct channel for communication with the city administration. You can find detailed information, a map, contact details, an FAQ and the opportunity to participate at pingifyoucare.brussels.

Mobiel 21 is a private and non-profit organization that is also committed to improving the quality of life in cities with a focus on traffic. The aim of the organization is sustainable mobility. Mobiel 21 aims to inspire individuals as well as organizations and governments to rethink their habits with regard to everyday mobility.

In addition to information and education, research and social activities are also important. In addition to the increased quality of life for people, Mobiel 21 also and above all focuses on environmentally friendly mobility. More information is available at mobiel21.be.

Recommended reading: Finn smartphone holder for bikes in the test

“PING if you care!” Also in German cities?

The project for and with cyclists was recently included in the category Digitization and web-based mobility solutions nominated for the VCÖ mobility award. That and the funding in Brussels from the city itself basically shows that PING if you care! gets ample recognition and attention. But is such a project also possible in other countries and cities, especially in bureaucratic, largely un-digitized Germany? Maybe in hip Berlin or other more modern cities, but certainly not everywhere.

Reading tip at the end: Germany in the Global Cybersecurity Index 2017