Senstroke: play the drums with bluetooth sensors and an app 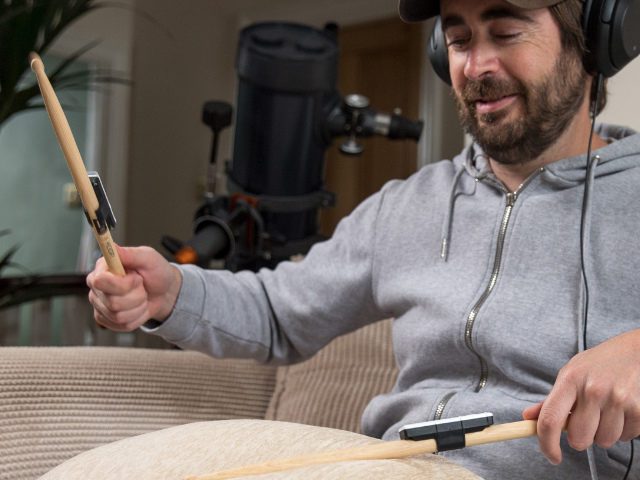 Playing the drums takes up a lot of space and makes a lot of noise? It should be different with Senstroke from Redison. Because the Senstroke sensors are simply mounted on drum sticks, connected to the smartphone via Bluetooth and off you go. Without drums, without a rehearsal room and at any time, it should be possible for beginners and advanced players to set the beat on a virtual drum set. Depending on the set, foot sensors are also included, so that not only snare, tom toms, cymbals and the like can be struck, but the hi-hat can also be used more extensively and the base can be used.

Depending on the Redison Senstroke box, there are more or fewer accessories for playing the drums via app. The set shown allows you to play drums with Bluetooth sensors to a large extent.

Whether learning to play the drums, deepening rehearsed sets or creating new rhythms - with the Bluetooth sensors on the drum sticks supplied, this should be possible anywhere. All you need is a drum mat - also included - and an iPhone or Android smartphone with the appropriate app as additional accessories. There are three different drum kits to choose from in the free app (see below): Snare Kit, Blue Kit and Big Rock Drum Kit. The sensitivity of the sensors can also be adjusted for different types of play. It is therefore possible to customize the setup well.

Learn to play drums without a drum kit and also import professional sets into GarageBand via MIDI - everything should be possible with Senstroke.

In the Senstroke app for iOS and Android, learning how to play the drums is just as easy as jamming on the kits mentioned above. At least iOS 10 is required on the Apple iPhone and iPad. For devices with the Google operating system, at least Android 8 is required. There is also software for Windows 10. According to the manufacturer, the Senstroke Bluetooth sensors can also be connected to any MIDI software to record your own drumming (should also be used with GarageBand work on macOS). After 3 hours of charging, it can be used for up to 12 hours. The named app can be found in the Apple App Store as well as in the Google Play Store.

Buy Senstroke: versions and prices at a glance

Three Senstroke boxes are offered, each of which has a different scope of delivery and therefore different prices. According to the first impression, the smallest package is only suitable for learning the basics (2 sensors), from the middle package more extensive games are possible (4 sensors):