Practical test: This is how much battery the Apple Watch Series 3 really consumes with LTE and GPS

Although I've been using Apple computers for almost two decades, I've had no incentive to buy the Apple Watch. Among other things, this was also due to the battery life of only 18 hours specified by Apple. A statement that, in retrospect, I would classify as very cautious. With the Apple Watch Series 3 with built-in LTE module The Smartwatch from Cupertino slowly became interesting for me and I decided to buy this model. My first smartwatch and my first Apple watch!

You can find the technical data of the Apple Watch Series 4 in this post bundled. Nevertheless, after introducing the watch, I would like to say something quickly about it. The new 4-series model of the Apple Watch should also have a battery life of 18 hours. Virtually the same term as the Series 3, which I've had on my wrist for over a year. And shall I tell you something? 18 hours is nonsense, because despite activated mobile communications, my Watch 3 currently only needs approx. 30-40% battery per 24-hour day (yes, I also have the watch on at night). So you can lean back and ignore the battery discussion. People who speak of 18 hours here have no practical experience with the Apple Watch ... [end of update] 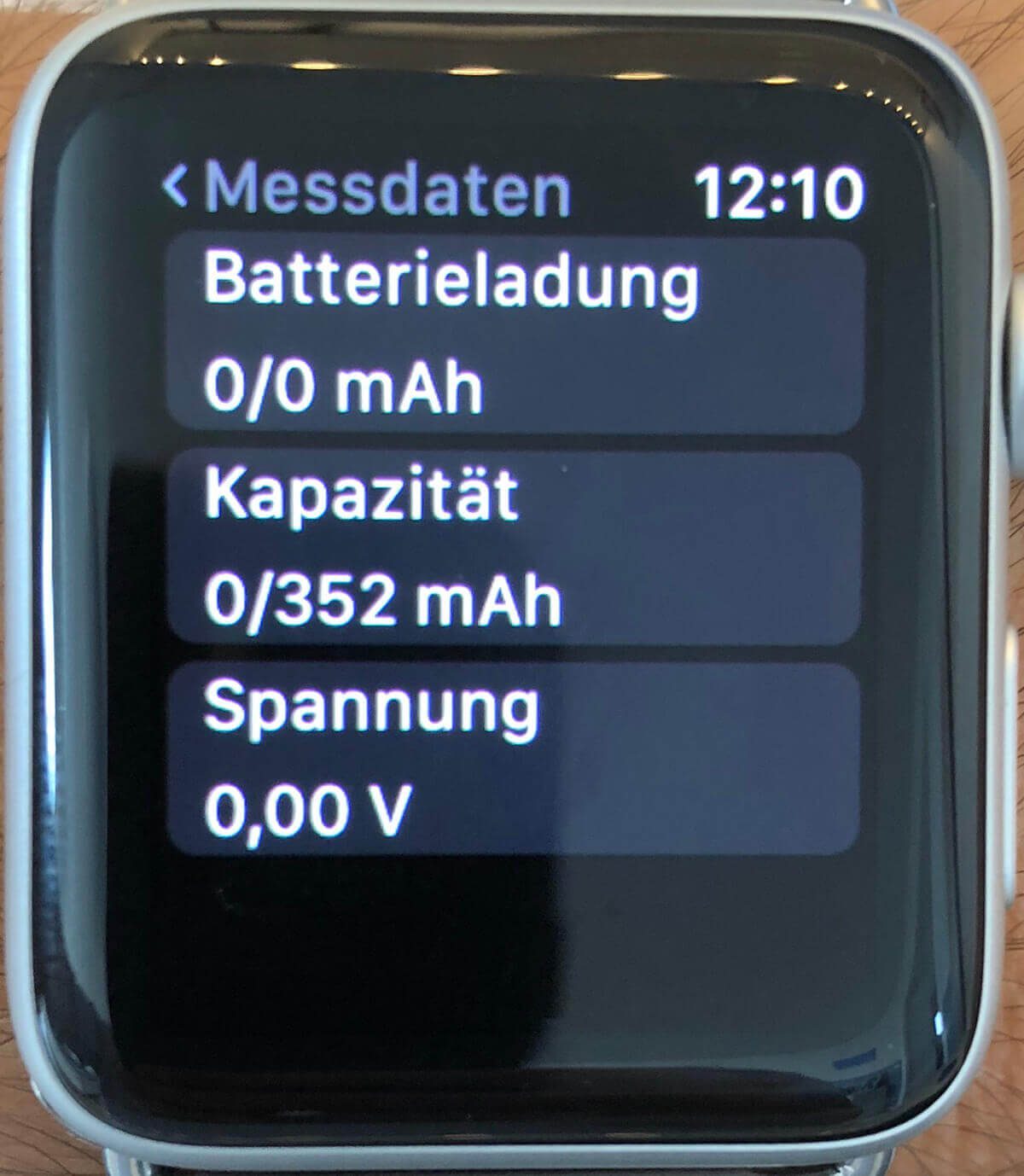 The battery in the Apple Watch is incredibly small. With a whopping 279 mAh and 1,07 watt hours, the smartwatch should survive the day. It was easy for me to believe that after an 18-hour shift it was in the shaft. Through the additional use of the GPS module and the additional power consumption for the LTE module, the battery life should go down dramatically.

My reader M. König has measured the capacity of his LTE Watch Series 3 times with the "Battery Life" app and comes to 352 mAh. The question of why some have 279 mAh and the other 352 mAh is easy to explain: The 38 mm models have a smaller battery and the 42 mm models the larger.

In the specialist media (podcasts and online newspapers), which even before a test made daring speculations about the Apple Watch LTE, it was not uncommon for 1-2 hours to be used when exercising without an iPhone and listening to music LTE is streaming. Mind you: These were rough estimates of the people in question, some of whom already had a previous model of the Apple Watch. With a running time of 1-2 hours, the watch would be relatively uninteresting even for medium-sized jogging laps and for short hikes, since you can't just hang it on a power bank like an iPhone while you're running.

My test: How much battery does the minute GPS + LTE suck?

Now that I've been wearing my Apple Watch on my arm for a few days and have made the most important settings, I wanted to test how the watch's battery performs when jogging without an iPhone (i.e. without a WiFi connection).

In the settings of the watch, I also deactivated the power-saving mode during training, started Apple Music to stream the music and then installed the Nike + Run Club app on the watch. It should also be noted that I had only charged the watch once since buying it. This means that the internal battery was not yet properly conditioned and could certainly have brought more capacity if it had been discharged a few days in a row and then fully recharged. This is an effect that is also known from other battery-operated devices (iPhone, MacBook, etc.). In short: The battery was definitely not in top shape and I activated everything that put the battery under stress. 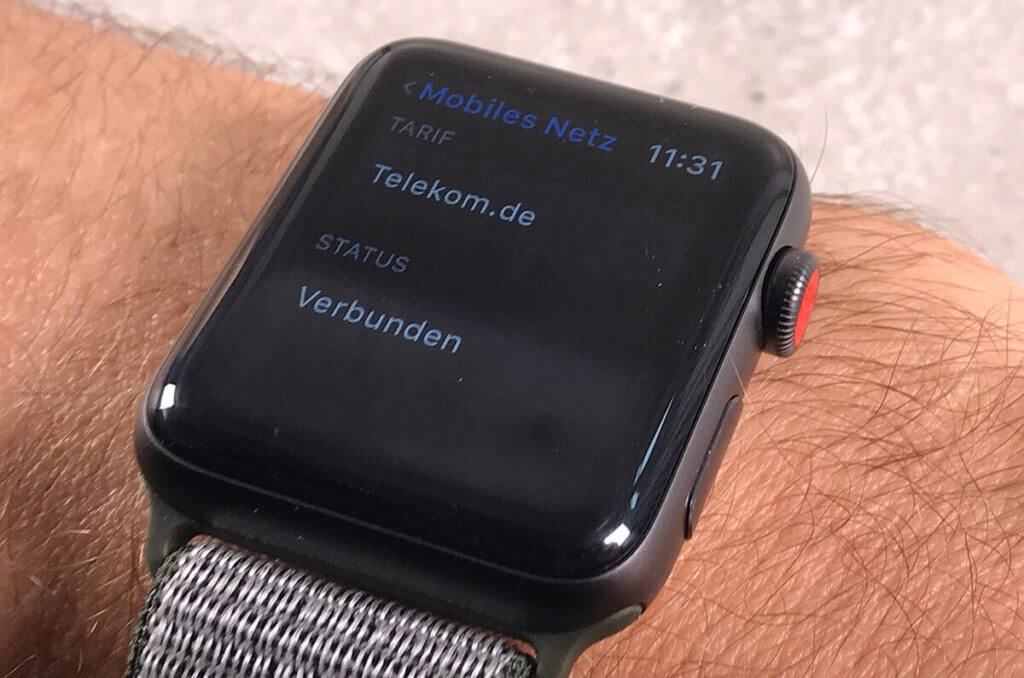 Apple Watch LTE: the mobile data network can only be activated with an eSIM from Telekom (photos: Sir Apfelot).

For the test, I jogged around the site for a good half an hour, streamed Apple music, used the Nike + Run app for tracking and thus kept the GPS and LTE modules permanently in operation. On the way, I often looked at the display, which of course puts additional strain on the battery. The music was played via the AirPods, which were linked directly to the watch.

The results: an amazing amount of power

In order to have tangible values ​​that I could count on, I photographed the time and the battery level of the watch before and after the run. Here are the screenshots:

The Apple Watch before the LTE test: 63% battery charge and still connected to the iPhone, which stayed at home while jogging.

After the test with intensive GPS and LTE use of about 30 minutes, the battery only lost 13% of its charge.

The results that can be calculated from this are quite exciting and, to be honest, surprised me quite a bit:

This results in the following mathematical derivations:

Now you will rarely start running with exactly 100% battery and arrive home with 0% battery, but the measurements show that you can jog for a few hours with the Apple Watch while you can stream music from the Internet via AirPods. One hour of LTE and parallel GPS usage "costs" about 25% of the battery.

Conclusion: The watch has enough power

Sure, some will say you can NEVER have enough electricity. That is also true, but at the moment we still have to live with smartwatch models without an integrated fusion reactor. For this reason I prefer a realistic view of the things that are currently available in stores. ;-)

To be honest, the result of the battery test was very surprising to me. I had already expected the worst (battery life of 1-2 hours) because I had previously heard too much speculation from "experts". The fact that Apple's statements about the battery life of their devices are by no means embellished and rather understated is already known from MacBooks and the Apple Watch is no exception.

For example, I only have to charge it every two days, as I only use around 20-30% of the battery per day. Even though I am constantly trying things out or doing little indoor workouts. The device is completely new to me and I am playing around with it a lot. Since I don't have to charge the watch often, I leave it on my arm at night, which also makes it interesting as a sleep tracker. But that's another topic I'd like to cover in another article. ;-)

The conclusion for me is that the Apple Watch with LTE module is in no way a "beta model" or something similar from Apple. The power consumption is of course higher than with an Apple Watch, which does not have to run LTE or GPS in the background, but you also get a lot of luxury: jogging without an iPhone with GPS tracking and music streaming in the background gives you a considerable feeling of Freedom if you are used to always taking the iPhone block with you when jogging.

The Apple Watch Series 3 with LTE is therefore my recommendation for music-listening outdoor athletes whose workouts remain under 4 hours. ;)

For a reader (hi homie!) I did a little experiment to see how long the Apple Watch LTE lasts if you don't have an iPhone with you and you don't have wifi available. The ulterior motive of the matter is that Homie is considering using the LTE watch as a replacement for the smartphone during the day. That means he wants to be on the go with it and doesn't have an iPhone in his pocket, so the watch is connected to the Internet via LTE at all times.

I deliberately chose a period of time for the test in which I was on the road. I drove my car to go shopping, went to some shops, sent a few messages and briefly started Apple music, as well as changed a few apps on the watch to simulate "normal" use. I had my iPhone with me, but it was off the entire time in airplane mode (WiFi and Bluetooth). 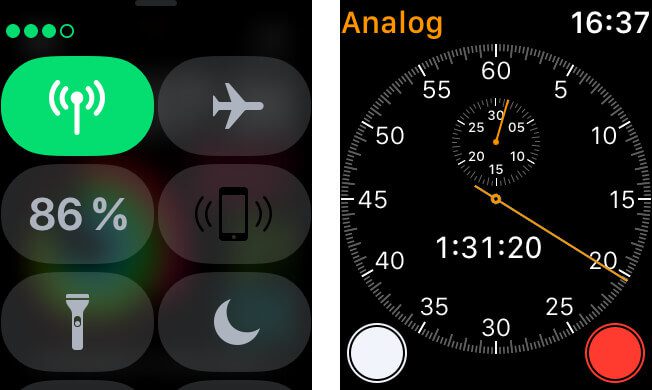 What does the Apple Watch LTE (Series 3) consume if you don't have an iPhone with you and it is constantly using the LTE network? This question is also clarified here in the article.

For the measurement, the watch was charged to 100% battery at the start and I ran a stopwatch. The Apple Watch LTE only had WLAN from my house for a short time at the start and at the end of the test, but not a single option to use the Internet via Wifi on the way. In addition, everything was included in the rural area from 4 to 0 bars of mobile radio reception, so that there was also a good mix for the test here.

The screenshots show that the watch used approx. 14% of the battery in a time of 1:31 h. If you roughly convert it, you also get 10% per hour and thus a rough value of 10 hours per charge. The value should of course decrease drastically if you actively use the LTE network and stream music or make phone calls, but that might be another test. ;-)

Update 09.11.2017/XNUMX/XNUMX: My current average consumption and my charging time

After a few weeks of use, I wanted to give you the following little information: On a normal day from 7 a.m. to 23 p.m., the Apple Watch consumes about 25% of the battery. I answer a few messages every day with the watch, control the podcast playback via it, check the clock, set timers, read a few messages and do an indoor workout every now and then.

I often have it on during the night, but then switch to theater mode, in which the display is only activated when the crown is pressed. During the night it then needs another 10% battery.

While I shower, the watch hangs on the charging cable and then receives electricity for about 10 minutes. During this time it charges about 10% of the battery. So for 100% it therefore takes a little more than 1,5 hours. If I could manage to charge an Apple Watch Powerbank for another 25 minutes during the day, I wouldn't have to have it completely connected to the charging cable every couple of nights. I'm still working on that. : D