I usually charge my Apple Watch at night using the original Apple charging adapter or during the day with the USB-C Magnetic Charging Dock from Satechi on my iPad Pro. I already have the power bank Terratec Charge Air Key tried it out, but the fastest still charges the watch via the original charging cable.

Tired of reading about Apple Watch charging cables for a long time?

Then I'll briefly summarize my measurement results for you: The cheap Apple Watch charging cables that you, for example via this link found on Amazon are just as fast as the original charging cable from Apple. The only difference is that the magnetic holder is sometimes a bit "weak" and the watch detaches from the charging adapter faster if you bump into it. 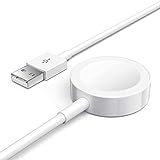 Incidentally, the charging adapters have not changed from the Apple Watch Series 1 to Series 7 (2021). For this reason, you can't get the wrong model with the purchase.

I still have the old Watch Series 3 in operation, which is why the top speed of 1 percent per minute is probably outdated, because the Series 6 and 7 should load a little faster. However, nothing has changed on the charging adapter since the first Apple Watch appeared, so I assume that my measurement results are valid for all Apple Watch models.

Can the Apple Watch be charged just as well with a cheap charging cable as with an expensive one from Apple? That will be clarified in this post.

How good are cheap charging cables for the Apple Watch

Since there is a large price range for Apple Watch charging cables on Amazon, I wanted to test what the cheap models are good for. You can find anything between EUR 9,50 and EUR 44, with that Original 2 meter cable from Apple represents the upper limit.

For my test, I specially selected a cheap cable that has reasonably good ratings, because I didn't want to choose a bad product straight away to “prove” that you have to spend more than 10 euros.

My choice fell on the "Osloon watch charging cable for iWatch", which would actually fall through my grid due to the name. There is no "iWatch" and I have never heard "Osloon" either. And it is also not certified and therefore not approved by Apple. So I actually started the test with the worst possible conditions.

I can't even link the Osloon charging cable to you, as it is currently no longer available and has probably long been sold under a different brand name. That seems to be a trend with the China suppliers, the purpose of which has not yet been revealed to me. But I'll show you afterwards how you can find an identical model.

The Osloon charging cable recognizes the Apple Watch immediately and starts charging - without the continuous interruptions that some reviews speak of.

2-in-1 combo charging cable for Apple Watch and iPhone

The cable is perfect for dessert or at work, because it combines the Apple Watch charging adapter and a Lightning plug to charge an iPhone or iPad (not USB-C!).

A little bit of information on the side that I once received from the manufacturer Equinux: Charging cables like this with multiple connections cannot be certified by Apple, as the design per se speaks against the licensing requirements. What is allowed, however, is a cable like that tizi rascalthat works with adapters to cover different types of plugs. For this reason, the rascal also has an mfi certification and the Osloon does not.

With the Osloon cable you can charge the Apple Watch and the iPhone at the same time in an emergency - in theory. I first had to try out whether this also worked in practice and take a few measurements.

Charging the Apple Watch: as fast as with the original

To measure the charging speed, I hung the Apple Watch on the charging adapter for 20 minutes. In 20 minutes, the original charging cable manages to increase the battery level by almost exactly 20%.

The cheap charging cable actually works just as quickly: from 8% to 28% in 20 minutes. In that regard, the cable can only be given full marks. By the way: The magnet is also strong enough to hold the watch on the cable. I wouldn't throw them around on the tile floor, but I wouldn't have that much confidence in the magnets of the Apple cables either.

The iPhone is charged with approx. 2 watts via the 1-in-5 charging cable. This is as much as the standard charger for most iPhone models (not the 11 Pro range).

Charging the iPhone: not fast, but ok

It looks a little different when charging the iPhone. While it charges with approx. 9 watts via the original charging cable, the Osloon cable only provides 5 watts. That is not fast, but if you have your iPhone hanging on the cable for a longer period (e.g. overnight), then it is more than sufficient.

If you charge the iPhone Xs with the original Apple cable, the iPhone reaches around 9 watts - significantly more than the Osloon cable can (photos: Sir Apfelot).

That works too. The iPhone continues to charge with 5 watts, while an additional 2 watts are released that are sent to the watch. The combination cable is therefore a good solution, especially for charging at the bedside table or for emergencies in the car.

You have to do that with cables like this mfi certified always expect that they will no longer be accepted by the iPhone at some point. In this case, the charging power drops again to 2,5 watts, which slows down charging considerably. But so far the cable still works reliably for me and there is no such detection for the Apple Watch, so you don't have to worry about it.

The bestseller of the combination charging cable

As already mentioned, exactly my cable is no longer available. But if you watch what is on offer at Amazon, you will quickly see that the same cable is sold under many different brand names: Saiwill, Yomeng and Amazan (especially creative!) Are some of them.

Since I cannot link a selected product, I would recommend you via this link to Amazon to go. You are looking for "iPhone & Apple Watch 2 in 1 charging cable". In the list you then choose a charging cable that looks like mine and that has 4 or more stars in the ratings. Then you should actually find a cable that is similar to mine.

The 2-in-1 charging cable from Osloon allows you to charge Apple Watch and iPhone - at the same time (photos: Sir Apfelot).

Bad reviews because of a weak power supply?

What amazes me are the reviews, some of which criticize the fact that charging keeps stopping and restarting. I cannot reproduce this behavior with myself.

I strongly suspect this happens when people try to charge both the watch and the iPhone using the iPhone's tiny 5-watt power adapter. In this case, the power supply does not provide enough power and these interruptions can occur because not enough power is supplied to the iPhone or Apple Watch.

In this case I would use a small USB-A power adapter like that Anker PowerPort Mini or the Aukey Omnia . Recommend

The bottom line is that I can only say: I'm surprised. I would never have thought that the cable would charge as quickly as the original. The sometimes bad reviews, which can probably be explained by the use of a weak power supply, did not give me much hope of getting a decent product here, but I was pleasantly surprised.

You can't get such a cheap Apple Watch charging cable directly from Apple. For this reason, the combination cable is a very practical and, above all, inexpensive solution.