Practical tip: Fixed an iPad palm problem when painting with a stylus

There are many people who have now got a [pen for iPad-> ipad pen]. Unfortunately, there is the problem that when drawing with a pen, you tend to put the heel of your hand on the surface. In this case, it's the iPad's touchscreen. And this, in turn, reacts to the ball of the hand because it thinks you would also be making entries there - which is of course not wanted. Depending on the app, the result is strange jumps in the lines or even wishy-washy crackling that occurs where the heel of the hand rests. No matter what happens, there is a high probability that it is not wanted.

The outsiders think that Apple has to improve this before they can work with a pen on the iPad. Technically something is supposed to be "solved" here - but you don't know exactly how to do it. Kurzu: You just don't use a pen and wait and wait and wait ... I think it will be a while before Apple intervenes. So they'll probably still be waiting in 2-3 years. :)

There are a few people here who are wondering how to use their existing iPad and other accessories to eliminate the problem of using a stylus on the iPad. One way, for example, is to use sports tape to cover the areas on the hand that unintentionally touch the iPad. Others put small doilies under the ball of their hands or try to make the ball of the hand float over the iPad screen with a slightly cramped hand position. Not all of the best solutions - but it seems to work for one or the other.

I just found a solution by chance, because I had a pair of new climbing gloves lying around in the hallway. They have an interesting feature: the fingertips of the index finger and thumb are cut off. This means that you can "grip" normally with these two fingers and also have a feel for what you are holding, but the rest of the hand is protected. So I immediately tested whether they just weren't touch-enabled and: No, you can't make any entries on the iPad with them! So perfect for our purposes. 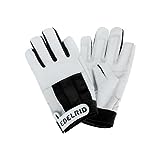 Edelrid via ferrata gloves, XXL
I have these Edelrid gloves, but you can also use sailing gloves or other gloves with two open fingers, for example. They should only be as thin as possible.
Buy it at Amazon Price includes VAT, plus shipping costs (updated: 1.12.2021 at 23: 50 clock)

With the gloves on, you can easily draw on the iPad how happy you are without the heel of your hand leaving any marks in the picture. Now the gloves are quite thin, but because of the leather design, they may not be for everyone. For this reason, I have looked for an alternative that will certainly work and is probably a little less sensitive: cheap cotton gloves with which you can cut off the fingertips with scissors.

254 Reviews
Cotton gloves, pack of 3, size M
The gloves are rated very well, are comfortable to wear and protect against unintentional input with the iPad. Here size M, but if you want other sizes, you can find them linked on the product page.
15,90 EUR
Buy it at Amazon Price includes VAT, plus shipping costs (updated: 1.12.2021 at 23: 50 clock)
-