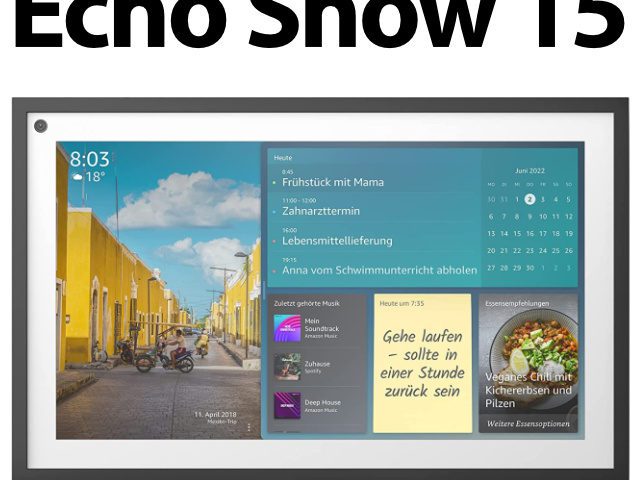 If you choose the smart home display Echo Show 15 from Amazon, then you're in luck. Because you can already pre-order the device. It will be launched on February 17, 2022 and is intended to combine many different tasks in the smart home: organization, entertainment, photos, device access (e.g. to the camera doorbell), information from the web and so on. A built-in camera also allows video telephony and video notes. The screen has a diagonal of 15,6 inches (39,6 cm) and a resolution of 1.920 x 1.080 pixels (Full HD).

The Amazon Echo Show 15 offers a 15,6-inch diagonal Full HD display and a 5 MP camera with cover. The smart home display with Alexa voice assistance can be used in portrait and landscape format and offers individual accounts for multiple users.

Among other things, the new Echo Show 15 is advertised by Amazon for use in the kitchen. After all, recipes can be displayed with step-by-step instructions. You can also access various content while cooking, washing dishes or cleaning: music, video streaming, Netflix, news, web information via Alexa and more.

The information on the screen and other content can be personalized so that different users have individual access. The identification takes place via a "visual ID", i.e. via face recognition. According to Amazon, the photos and data required for this are only stored locally and encrypted. There is also a built-in camera cover.

In addition to the launch of the Echo Show 15, you can currently find several January offers on Amazon. Among other things, the Echo Smart Speaker, the Echo Dot, the Echo Show S and the blink outdoor camera are offered at lower prices. You can save 30 or 35 euros each by choosing one of the devices mentioned. Details and other offers can be found on the corresponding Action page for the January offers.

However, with the launch of the Amazon Echo Show 15, which is now available for pre-order, you might want to buy and read a certain literary classic, which is always used for a (more or less correct) comparison in view of such devices: Here you come to the product page. Feel free to leave a comment with your opinion on the new Echo variant.