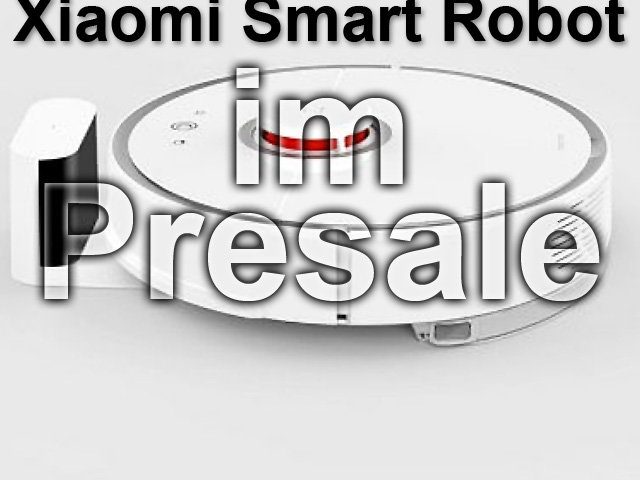 From the smart device manufacturer Xiaomi, who works on intelligent household appliances together with Roborock, the new version of the Xiaomi Smart Robot vacuum robot on the market. The new generation of the vacuum cleaner robot, the one here and there too Roborock S. not only has a larger collecting container and more suction power than the 2016 model, but also a water container and a wiping function. This correlates excellently with the smart navigation of the Xiaomi Smart Robot vacuum robot.

The new Xiaomi Smart Robot vacuum robot with mopping function sweeps, vacuums and mops. It should perform the first two functions even better than the Mi predecessor.

The Xiaomi Smart Robot vacuum cleaner robot of the new generation will be in place until the end of October at GearBest in advance sales. Why should you secure the device? Well, if you have the wherewithal to spare, pre-ordering will give you a good price for a device that is not only the predecessor of Xiaomi and Roborock (Xiaomi Mi Robot) can do something, but apparently also easily outperforms the competition. Because with three independent CPU chips, the creation of space maps at NASA level (according to the developer), up to 2,5 hours of runtime and a built-in mop, the vacuum robot has some advantages - at least I think so ;)

The new Xiaomi Smart Vacuum robot hoover model was apparently planned for sale from 2018. However - at least at GearBest - the pre-sale has already started, and the first deliveries are to take place from November. Here are some technical data, features and functions of the old and the new generation of Xiaomi vacuum robots:

With regard to the Xiaomi Mi Robot I couldn't find any information about the type of obstacle (door sills, cables, pipes, etc.) and up to what height of these obstacles it can drive over. The new Xiaomi Smart Robot Vacuum Cleaner seems to be able to climb or overcome thresholds, steps and other hurdles up to a height of 2 cm. Exactly will be shown in the test. At least one vacuum robot test is planned in this blog. So subscribe to the newsletter or sign up for the push notifications if you always want to stay up-to-date!

Comparison with iRobot and Neato

Other well-known models in the field of vacuum cleaner robots are the iRobot Roomba 980 and the Neato Botvac D85. Both models have their own advantages, such as a 700 ml collecting container or a nicer look. However, they have some disadvantages in their price range, in which the new Xiaomi Smart Robot / Roborock S also moves:

The way the new smart vacuum robot is driven and cleaned compared to the competition iRobot - as the developer Roborock sees it.

So I'm curious about the new vacuum robot from Xiaomi and also about a test of the Xiaomi Smart Robot, which is not only a new edition of the Xiaomi Mi Robot, but also offers extensive improvements. Of course, the wiping function in particular has to prove itself. Or what do you think, what the new smart household appliance from Xiaomi can or will not do? Feel free to leave a comment with your opinion and your experiences - even if you would like to recommend a completely different model;)