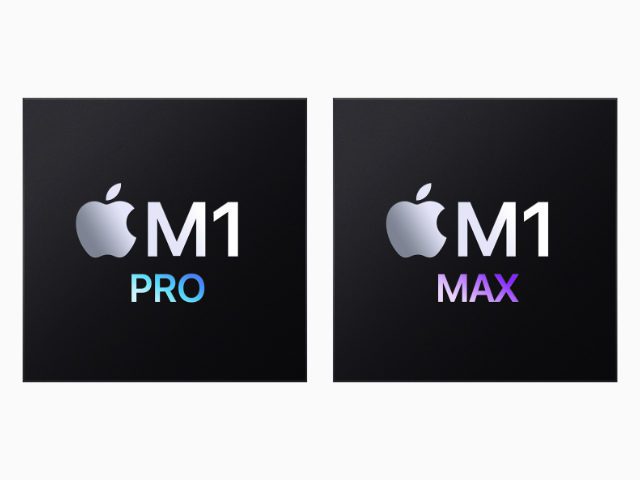 Apple has introduced two new chip systems for the new models of the MacBook Pro as well as for the demands of the users. The first SoC (System on Chip) is called M1 Pro and offers either an 8-core CPU and 14-core GPU or a 10-core CPU and 16-core GPU. The second SoC is the Max M1, which offers either 10 or 24 cores for the GPU with 32 CPU cores. In addition to other elements, both models have integrated a 16-core neural engine. Up to 64 GB of RAM can also be used.

Here you can find a few details about the Apple M1 Pro Chip and Apple M1 Max Chip. The new SoC models for the MacBook Pro ensure the fastest laptop performance with little power consumption.

The Apple M1 Pro is a powerful further development of the M1 chip introduced last year. The new MacBook Pro models can access over 1 billion transistors when using the M33,7 Pro, more than twice as many as on the M1. The SoC, which combines the processor, graphics unit, neural engine, ProRes acceleration and other components, is compatible with 16 GB and 32 GB of RAM. This is used as "Unified Memory", ie shared memory for all elements, which is quick and efficient.

The M1 Pro also offers a memory bandwidth of up to 200 GB / s for extremely fast data exchange and an undisturbed workflow. Whether video editing, music creation, programming or other computationally intensive tasks - with the M1 Pro Apple has once again expanded the mobile options for professional users. Thanks to the eight high-performance cores and two highly efficient cores of the CPU, the SoC is up to 70% faster than the M1. 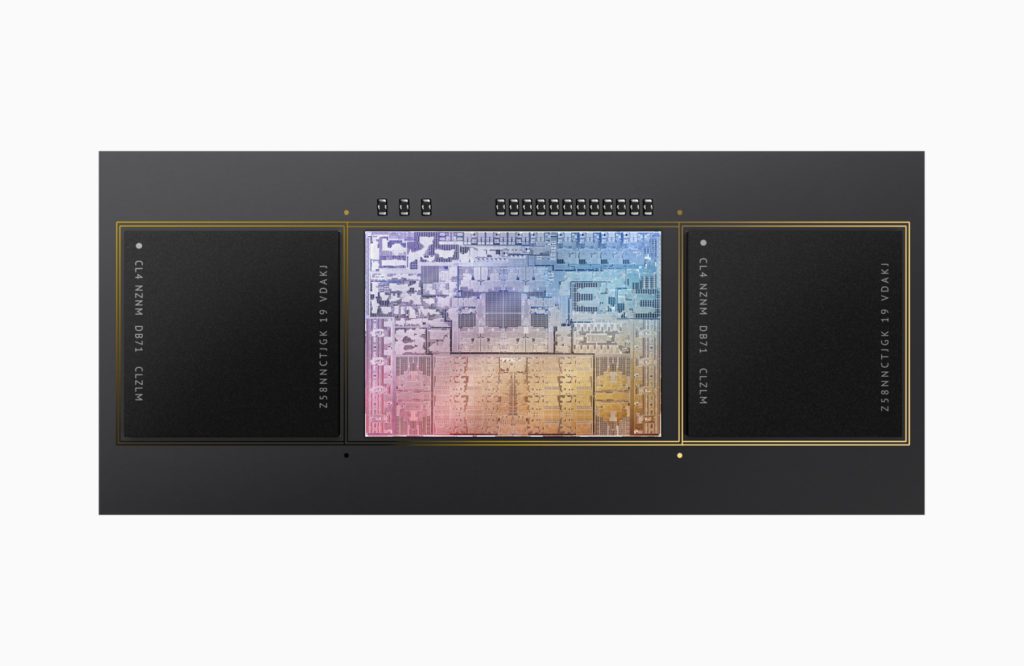 The Apple M1 Pro chip for the MacBook Pro 2021 offers significantly more processor and graphics performance than the M1 chip. Thanks to up to 32 GB RAM and 200 GB / s data transfer, it is great for pro tasks that have to be done on the go.

"Compared to the latest 8-core chips for PC notebooks, the M1 Pro delivers 1,7 times more CPU performance with the same power consumption and achieves the top performance of PC chips with 70 percent less power consumption“, It also says in the official press release on the subject. And also during the Apple October Event 2021 Many comparisons were made on Monday that show that the new MacBook Pros with the new M1 versions are far superior to the mobile Windows machines.

The M1 Pro can be used with up to 16 cores in the GPU, which are up to twice faster than those in the M1 chip and seven times faster than the fastest integrated graphics in an 8-core chip in a PC notebook. The M1 Pro delivers more power with much less power consumption. In conjunction with up to 32 GB of RAM and a memory bandwidth of 200 GB / s, even 3D art and game development can be realized, and that in battery mode. 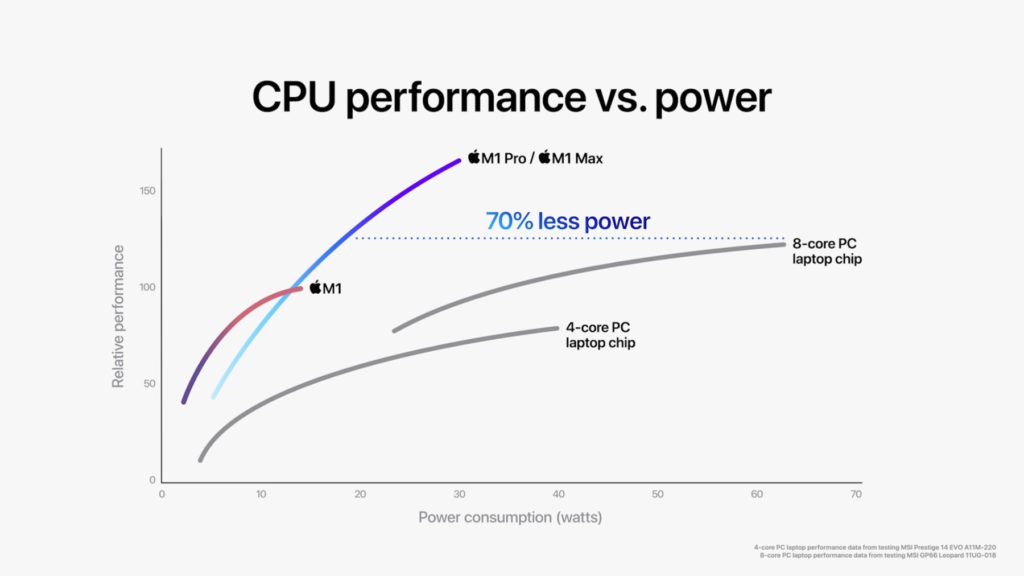 The M1 Pro and the M1 Max ensure a much better performance with significantly less power consumption (compared to PC notebooks).

"The performance is comparable to that of the high-end graphics processor in the largest PC notebooks, while the M1 Max consumes 100 watts less power“, It says in the press release linked above. This not only means that you can work on the wildest film effects, the new 3D video game or extensive picture compositions for longer in battery operation. It also ensures less heat generation and rarely used or quiet fans. 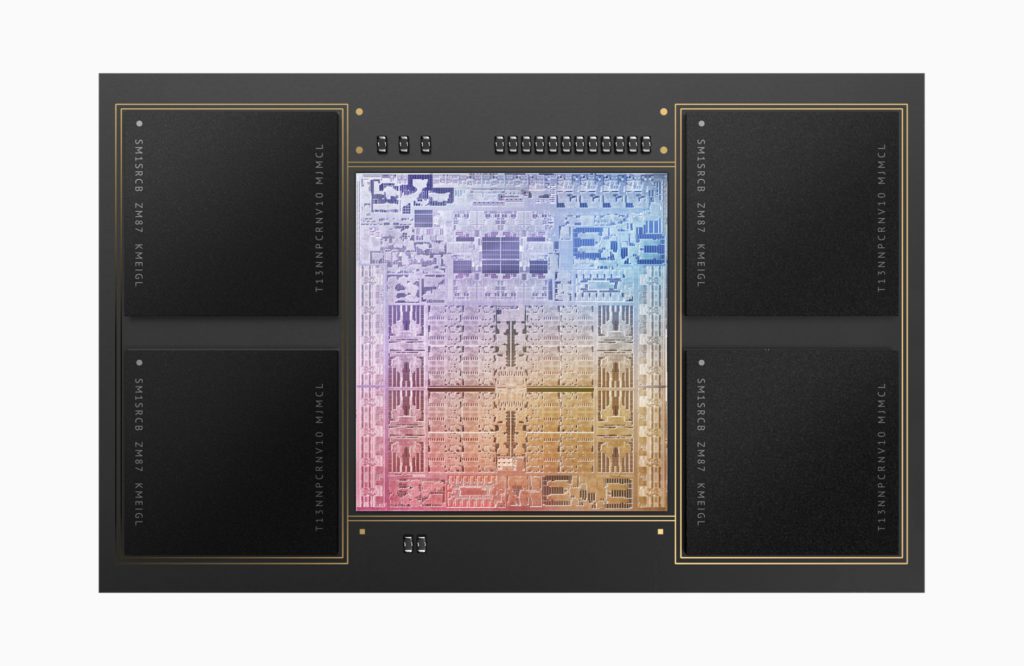 The Apple M1 Max chip for the MacBook Pro models from 2021 offers the best processor and graphics performance for mobile computers. With up to 64 GB of RAM and 400 GB / s data transfer, even the most professional projects are possible on the go - even in battery mode.

Oh yes, the new M1 Max also offers twice as fast a data bandwidth as the M1 Pro, namely 400 GB / s. That's almost six times the M1 chip. This speed enables the use of either 32 or even 64 GB RAM memory. In addition, both chips (M1 Pro and M1 Max) offer an efficient media engine that can handle multiple 4K and 8K videos in ProRes. The M1 Max offers twice as fast video coding as the M1 Pro.

The 16-core neural engine on both chips also accelerates machine learning and works to improve camera performance. A special display engine ensures that up to four external, extremely high-resolution screens can be connected and used without restricting the performance of the MacBook Pro. An integrated Thunderbolt 4 controller results in more I / O bandwidth. Further details can be found in the linked press release from Apple. 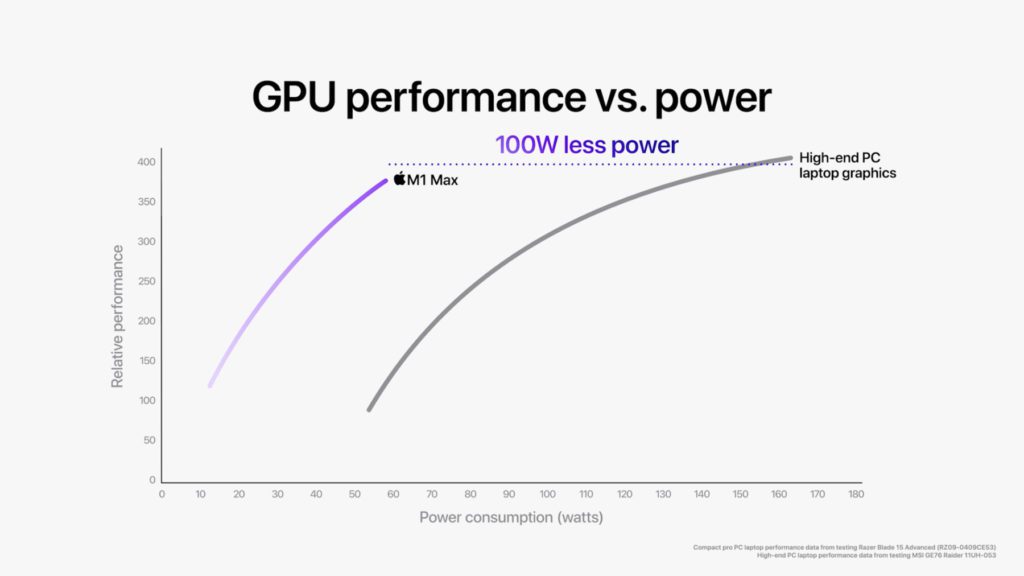 Compared to high-end graphics in a PC notebook, the M1 Max delivers the same performance with 100 watts less consumption.

Is the M1 Max faster than the PlayStation 5?

Keyword “Teraflops” - this value is used again and again when it comes to the processor and graphics performance of computers or other devices, for example video game consoles or new components for gaming PCs. A FLOP denotes the value "Floating Point Operations Per Second", ie the floating point number operations per second.

Put simply, this value is composed of the clock frequency, CPU socket, CPU cores per socket, commands per clock, data words per calculation register and numerical operations per command (Source). The example given by Wikipedia for 2,5 GHz, 2 sockets, 24 cores, 2 commands per clock, 8 data words and 2 numerical operations should provide a value of 7,68 teraflops. So much for orientation ...

Now, after the M1-Pro and M1-Max presentations, I have one Post found by the Macerkopf, in which a few related data and information from various sources have been summarized. The following overview was created for the different versions of the M1, M1 Pro and M1 Max (the latter with their different numbers of GPU cores):

The comparison with the PlayStation 5, currently the newest game console model from Sony, became one Tweet Taken from @ZONEofTECH. It compares three values ​​of the M1 Max and the PS5. The M5 Max comes close to the PS1 in terms of data bandwidth: the Apple M1 Max offers 400 GB / s and the Sony PS5 achieves 448 GB / s. The iPhone manufacturer triumphs in the other two values. Its Max chip offers 10,4 teraflops, while the PS5 comes to 10,3 teraflops. And finally the SSD speed: 7,4 GB / s with Apple, 5,5 GB / s with Sony.

As is written in the linked Macerkopf source, so "[...] these claims are only on paper. Proper performance and speed tests will certainly follow shortly after the new MacBook Pros are shipped to customers in the next week". What do you think about it? Are you power users buying one of the new MacBook Pro models? Feel free to leave a comment on the topic.