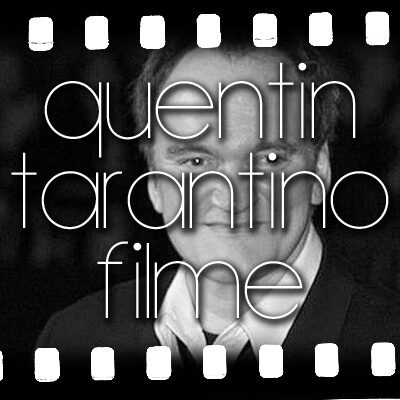 Quentin Tarantino films are timeless cinema monuments made by Reservoir Dogs and Jackie Brown leads over Death Proof and Pulp Fiction towards Kill Bill, The Hateful 8 and D highlight interpersonal relationships near the abyss. Tarantino is known as a screenwriter and director and is famous for his dialogues, his somewhat realistic (if often shady) characters, his turning inside out of filmmaking and for the liters of fake blood that are not infrequently found in his films. Everyone knows at least one Quentin Tarantino film; here I want to show you all that you should know.

Quentin Tarantino films are cult: in the cinema, on DVD and Blu-Ray, the screenwriter, director and actor knows how to convince. When will Quentin Tarantino's new film come out?

Quentin Tarantino films: from simple to complex, but always confused

Quentin Tarantino's high-profile career began in 1992 with the film Reservoir Dogs. The film, which revolves around trust and betrayal within a loose gang of gangsters, drew viewers through greats like Michael Madsen (later also in Pulp Fiction, Kill Bill and The Hateful 8), Steve Buscemi (also in Pulp Fiction) and Harvey Keitel (also Pulp Fiction and From Dusk Till Dawn) to the cinema. The professional Flimwelt praised the new approaches in Tarantino's film, its dialogues as well as the overall production.

Two years after this film followed the hit that everyone knows: Pulp Fiction with the aforementioned actors and also Uma Thurman, Samuel L. Jackson, John Travolta, Bruce Willis and other high-profile stars. Pulp Fiction showed once again how much Quentin Tarantino can weave confused and interwoven storylines into an aha effect and make the characters appear realistic (albeit wacky). But so far there have only been two films from 1992 and 1994.

Jackie Brown, for some of the 1997 second part of Pulp Fiction, is based on the book Rum Punch by Elmore Leonard. Again, alongside other greats, Samuel L. Jackson shines. Above all, Pam Grier does an excellent job as Jackie Brown in the lead role. A wonderful heist movie!

Kill Bill however, Uma Thurman was tailored to the acting body. But also all other actors down to the smallest supporting role convince in this strip by Quentin Tarantino, which was split into two parts, the years 2003 and 2004. “The Bride”, whose name (spoiler: “Beatrix Kiddo”) has been edited again and again from the film, is embarking on a tremendous but understandable campaign of revenge. Stylistically, I find this Quentin Tarantino film the most beautiful, probably because it is based on old Hong Kong movies (both Tarantino and Jackson, who plays the piano in the second part, love these films) and other Eastern genres. 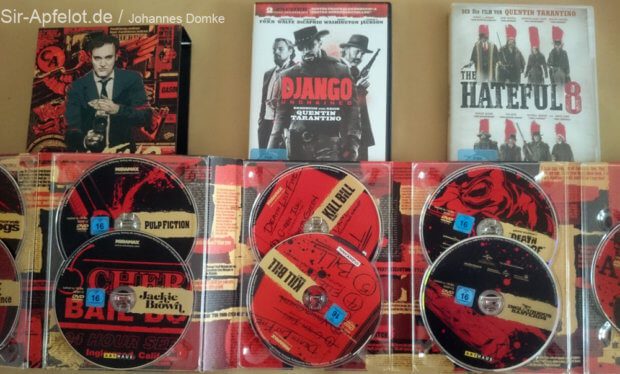 Do I have all the films that Quentin Tarantino wrote and directed on DVD? Maybe ;)

Death Proof Tarantino had again too for someone wrote for Zoë Bell, Uma Thurman's stuntwoman in Kill Bill, who plays herself in Death Proof. The film, conceived and designed as a B-movie and kept in the style of the 70s, became a double feature “Grindhouse” with the film Planet Terror released; a film directed by Robert Rodriguez, a friend of Tarantino. The end of the 2000s made cinematic Inglourious Basterds, the fictional story of a US special unit tasked with killing Hitler on French soil during World War II. The 2009 film was also the last cut by Sally Menke, Quentin Tarantino's long companion since Reservoir Dogs. She probably died in 2010 as a result of heat stroke.

In 2012 and 2015 Quentin Tarantino released one film each, each of which could be described as a western. With D he delivered an extensive story that tackles slavery, racism, sexism and all sorts of other problems. The film also has a rather long storyline for breakfast. On the other hand, it is different The hateful eight or The Hateful 8. Most of the film is a kind of chamber piece and takes place as a plot for a short period of time in a hut that offers the despicable eight shelter.

Here I have picked out the films on Amazon that have been mentioned up to now. A comprehensive Quentin Tarantino box, neither as a DVD box nor as a Blu-Ray box, does not yet exist - only "Tarantino XX - 20 Years of Filmmaking", which does not contain Django and the 8. A new, all-encompassing box will likely be available if Quentin Tarantino carries out his threat and has made 10 films. After that he wants to stop. So there are coming only two left new Tarantino films ...

Tarantino only counts the films he has written and directed - Kill Bill 1 and 2 are considered one film. So we currently have eight strips. At least partly as a director he was also involved Four Rooms (1995) and Sin City (2005). It also dates from 1993 True Romancewritten by Quentin Tarantino. And then of course we are not allowed to From Dusk Till Dawn to forget; Tarantino also played a role here, as well as in Four Rooms and many other films in which he had participated (although not as a director). 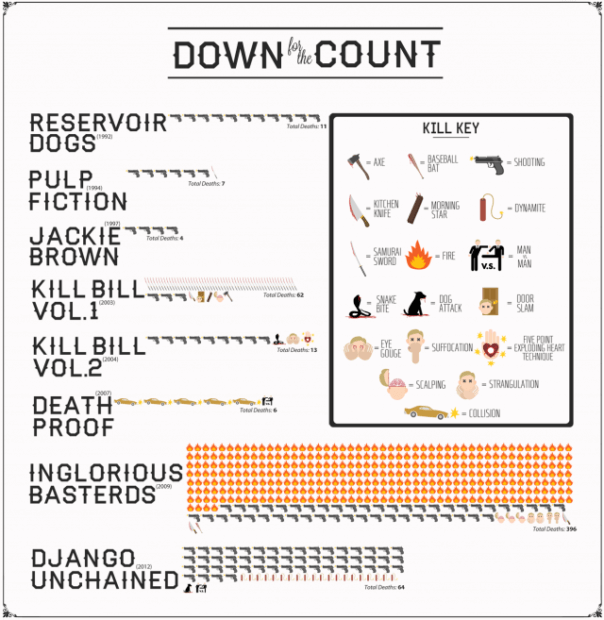 Infographic: The deaths in the Quentin Tarantino films, film by film and broken down by type.

But what is there to report on a new film (or the two new films) by Quentin Tarantino? Basically nothing (except when the BILD again spinning around with obscure news). With The Hateful Eight, at least before, a lot was known (through a leak in the script). But fans, the curious and those who like to click are now groping in the dark. Some rumor about another western, others suspect part 3 of Kill Bill, still others think that this film is finished and that the ninth Tarantino film will be something completely new, unprecedented. In 2017, however, we can no longer count on a film or just a trailer, maybe in 2018? Maybe a trailer ...

What do you all mean? Feel free to leave a comment! :)