Reader's report: Installation of a 1 terabyte SSD in an Apple iMac 2013

My reader Jürgen provided me with a tinkering report from a weekend project in which he and his son equip an older iMac with a pure SSD and dissolve the Fusion Drive that was still active in the iMac.

Is an SSD noticeably faster than a Fusion Drive?

He recently asked me whether it makes sense to convert an iMac from 2013 that is already running with a Fusion Drive to a pure SSD. My answer was what I would not expect any major speed improvements from this, since the Fusion Drive stores the data that is used most often on the SSD part of the Fusion Drive anyway.

Jürgen decided that he should give his iMac a try and install a SanDisk Ultra 3D SSD with 1 TB of storage. According to him, the speed has noticeably improved again compared to the Fusion Drive.

Is it worth installing a pure SSD if the Mac already has a Fusion Drive? According to Jürgen's opinion, one can clearly answer "yes" here.

SSD via USB 3 port does not make sense

Just as a brief note: connecting the hard drive via the USB 3 port, as used by some Mac users who do not want to convert the hardware in their Mac themselves, is not a good idea compared to a built-in Fusion Drive.

The USB 3 port offers a data rate of max. 120 MB / s, which is unfortunately significantly lower than the maximum possible 500 MB / s that a Fusion Drive can offer when it accesses data on the SSD part. The connection via an external hard drive can only make sense with older iMacs that still have a FireWire connection. These usually do not have a Fusion Drive and are significantly faster even with an SSD that is connected externally via the FireWire port.

The "ingredients" for the renovation

So that you know what you need for the conversion, I have linked the corresponding equipment and parts here, some of which were also used by Jürgen or which are similar to his. With the adhesive strips for the iMac display, however, you have to make sure that you use those that fit your model or your display size. 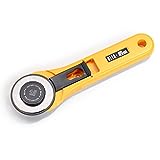 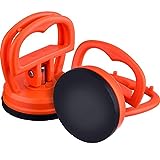 Suction lifter (double pack)
With these suction cups, the display glass of the iMac is lifted after the adhesive has been removed to expose the innards of the Mac.
10,99 EUR
Buy it at Amazon Price includes VAT, plus shipping costs (updated: 27.05.2022 at 02: 20 clock)

Jürgen bought the adhesive strips from iFixit, but with postage to Germany they are around 20 EUR. The BisLinks sets, which you can get from Amazon Prime without shipping costs, are cheaper. They are also made to measure and fit perfectly. Which set you need depends on the screen size of your Mac. I have listed both sets for you here with the corresponding iMac model numbers: 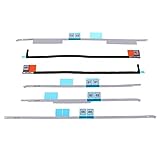 These stickers are for the iMacs with the model number A1419 (27 inch): 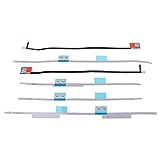 Otherwise you only need a little manual skill, a table with enough space, a soft surface on which you can place the display after it has been removed and a bit of rest.

Before the conversion: Backup of the Fusion Drive

Before you start the conversion, you should make a 1: 1 backup of the internal Fusion Drive on an external hard drive. I will explain how it works in detail in a separate article (which I will then link here), but for now the reference to a backup should suffice.

Jürgen kindly sent me a lot of photos and also commented on them. I have edited it a bit and am now including it here as instructions and documentation so that you can see how opening the iMac, installing the SSD, reattaching the display and transferring data to the new hard drive works.

The iMac 2013 waits patiently on the operating kitchen table for the campaign to start (photos: Jürgen).

The picture shows Jürgen's son cutting open the iMac with the help of a circular knife. The cuts separate the bonds that connect the display to the rest of the iMac.

The open patient. It's amazing how little electronics there are in an iMac.

Here you can see all the tools and spare parts that were required for installing the SSD.

Before you can attach the new adhesive strips, you have to peel off the remains of the old ones with alcohol, a knife and a little dexterity.

Here you can see the adhesive strips with which the display is stuck to the iMac case. These are precisely tailored and unfortunately you cannot do without them during the renovation. (Note: these are from iFixit, but the ones linked above from BisLinks are just as good and significantly cheaper.)

This is where the (extremely) adhesive strips from iFixit are attached to the housing. And every now and then one wonders how much money Apple charges for that little bit of "content" in the iMac. ;-)

The patient is saved, a fresh macOS 10.13 is installed and the data is transferred from the Time Machine backup using the "Migration Assistant" utility.

The Mac survived the intrusion well and is now much smoother. The costs are around 300 euros with a 1 TB SSD from SanDisk. An investment that is significantly cheaper than a new iMac, but which still brings noticeable improvements in practice.

I thank Jürgen for the many photos and the report! It's great when readers participate in the blog and support me with photos and information. If you have an exciting renovation in mind, just document it and send me the report. Maybe it is interesting for the other readers.