Readers question: wanted a small black and white laser printer for the iPad in the office

Today I got a question from my loyal reader Josef, which at first seems to be easy to answer, but after a little research I realized that it is not that easy after all. Josef asked me for a small, compact monochrome laser printer that he could use in the home office with his iPad Pro.

Printer sharing under macOS does not “share” for iPhone and iPad

First I wanted to suggest to him that he could connect some small laser printer to his Mac and then use it for iPad and iPhone via printer sharing.

However, I wanted to test the solution in practice first before I pass it on unseen. A short test quickly showed that this did not work because the printer was not visible on either the iPad Pro or the iPhone. iOS obviously only lists printers that are AirPrint-compatible and that's not everyone. My Brother HL-2300 D (its successor Brother HL-2350DW is otherwise a very good printer for the Mac!) also not.

Printer sharing on macOS Big Sur only shares the printer with other computers but not for iPad and iPhone models.

My choices were significantly reduced with the AirPrint story and I quickly got on HP printer shot in, because this manufacturer has been offering AirPrint printers for a long time and has been supported quite well by drivers in macOS directly for ages.

The AirPrint thing also requires it to be a WiFi printer because there is no AirPrint without WiFi.

My recommendation fell on the HP Laser 107w - a black and white charger printer that is also AirPrint compatible and can therefore be addressed directly from the iPad (Photo: Amazon).

The bottom line was that I opted for the HP Laser 107w. The “w” on the back is important because the 107a only runs via the USB port. Here are a few technical details about my find:

If you want to buy the HP 107w, you will find it here at Amazon or via this product box:

And . there is also the toner replacement from Greensky with a yield of 3000 pages: 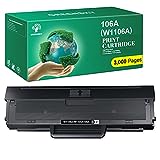 If you have good alternatives from your home office that you would like to pass on, please leave them here as a comment.