The reality composer is an app for Augmented Reality (AR) with which you can enhance the camera image with virtual objects and effects on the iPhone and iPad. In this guide you will find step-by-step instructions for learning the basic functions of the software for iOS and iPadOS. In addition to the example steps shown, there are of course also different and sometimes faster, sometimes more extensive procedures. With the overview that you can get by means of the following paragraphs, you are prepared for the independent development of individual projects and the necessary inputs;)

You can use the Reality Composer app with different versions of the Apple iPhone and Apple iPad. The software, which you can download for free from the regular App Store, comes directly from Apple and is compatible with operating system versions 13.2 and higher. This means that you can use the Reality Composer on the iPhone not only with the iPhone X, XR, XS, 11, 11 Pro and the Max versions, but also with the iPhone 6S, SE, 7, 8 and the individual Plus versions.

First steps in Reality Composer: Create a project and select an anchor

Once you've downloaded the Reality Composer onto one of the compatible Apple devices, you're ready to go. Simply open the app and either tap on the plus (+) in the "History" tab in the top right corner or on the "Browse" tab Create Document. You can switch between the tabs by tapping on their symbols and names below.

Now you come (possibly after a short loading time) to the "Select anchor" menu, where you decide what will be the basis for the AR object to be inserted or the effect to be selected. Chooses Horizontal for the tabletop, the floor, the couch or similar surfaces. Uses Vertical for walls, stands and the like. With picture do you use a certain, limited area like a poster, a book, a box or something - alternatively use the last point Propertiesto scan an object and anchor the AR object to it. The penultimate point Face should be self explanatory.

Let's stick with the first option, "Horizontal", to create a simple example. If you tap on this anchor type, a cube will appear in a virtual environment on the display of your iPhone or iPad. You can edit this cube or simply delete it - tap it a little longer with one finger so that the pop-up menu appears. You then choose from this Delete (last selection point).

Now tap on the plus symbol (+) in the toolbar (above) to insert a new object into the project. This is a good start, especially for beginners, as a prefabricated object does not require any further processing - apart from adjusting the size, orientation and effects. In addition to shapes, signs, diagrams and billiards, chess and other objects, there are many other (playful) things. You may have to download them before placing them.

To edit the selected object, tap on it and then tap on the "Properties" icon in the toolbar, which looks like a box in a gear. Now you can make all sorts of adjustments - change the size by scaling, adjust the position in space on the X, Y and Z axes, change the look and the physics, etc. You can either play around with it now or when you have tested the object in augmented reality and want to make adjustments.

So that the object not only stands around in the AR, but also does something, tap on it and then select the "More" symbol (three dots) from the toolbar. Then tap on "Behavior" and in the following overview on the plus symbol (+) to add a behavior. Several successive or simultaneous behavior options are possible - for example a movement in combination with a sound after tapping the object in the AR.

If you use the beginner's example of the toy rocket (see video at the end of the article), then select the last point from the behavior overview own out. This allows individual settings to be implemented. To launch the rocket at will, use the behavior as a "trigger" Tap. With this you determine that the action only starts when you do. This in turn you place with the selection of the "Action" name Move, rotate, scale around (in my test "on" instead of "around" worked).

With the adaptation of the Duration (in seconds) you determine how long the rocket's ascent should last - if it takes a long time, it flies slowly. If you choose only a few seconds, it flies away quickly. In order for it to do this, however, select the point on the left in “Type 'Lightness'” Move in. This is followed by an entry under "Position", namely for the Y-axis, since the rocket is supposed to fly upwards. The entry is in cm, it is important to note that.

As the last intermediate step, tap on the three points of the behavior menu (center right) and assign them in the corresponding text field Name a name for the behavior created. For example, you can use 'rocket takes off' so that you can clearly identify it. Of course, 'Test 1' or something like that is also possible, if you don't do dozens of tests and don't go through any more at the end;) 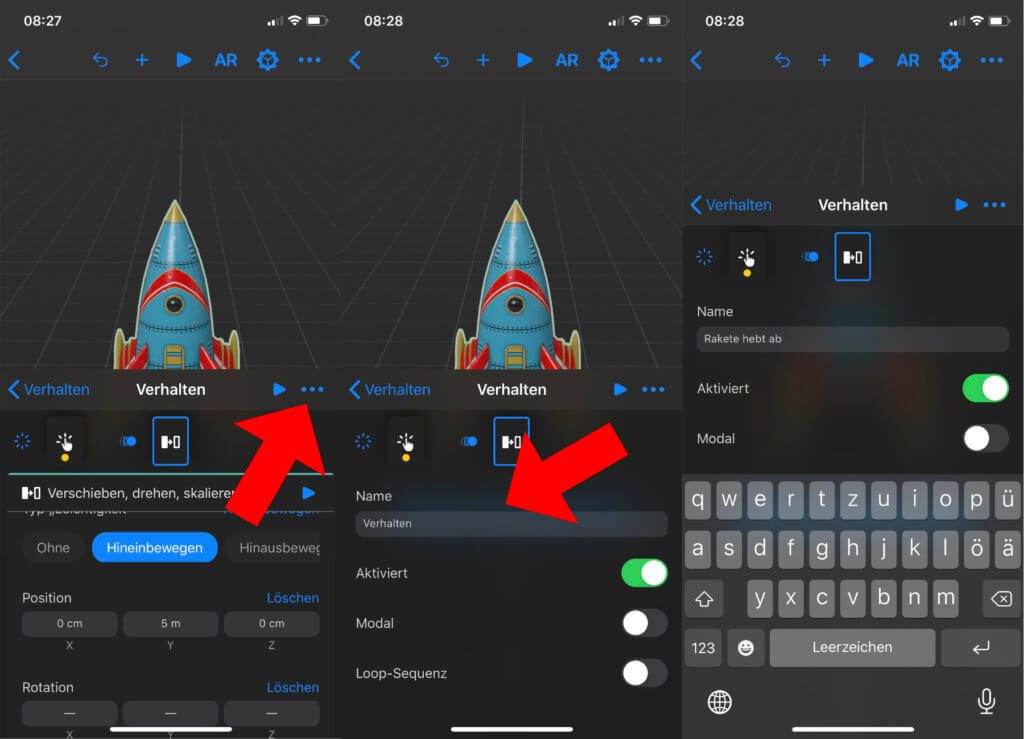 Place an object in the world and create an AR

So now we have created our first project, placed an object and assigned an individual behavior to it. So it's time to place the object in augmented reality and see if everything works the way we want it to. Simply tap on "AR" in the toolbar - the first time you will probably get a message that the app wants to access your camera. This is of course essential for an AR app; so you have to agree.

You will now see the live image from the camera, coupled with the request to move the iPhone (or iPad or iPod) sideways back and forth. With this, the software scans the environment and can thus place the object on a surface. So after a few moments the rocket will appear on the selected surface.

Adjustments such as size and position can be adjusted directly. Use the familiar zoom or drag gestures with two or one finger. Once you have placed the object as you wish, you can already start the behavior that you specified using the steps outlined above. To do this, tap on the PlayIcon in the toolbar and then on the object (the rocket). Since tapping was selected as the "trigger", the "action" now starts, for which you have defined the parameters (duration, movement and value on the axis). 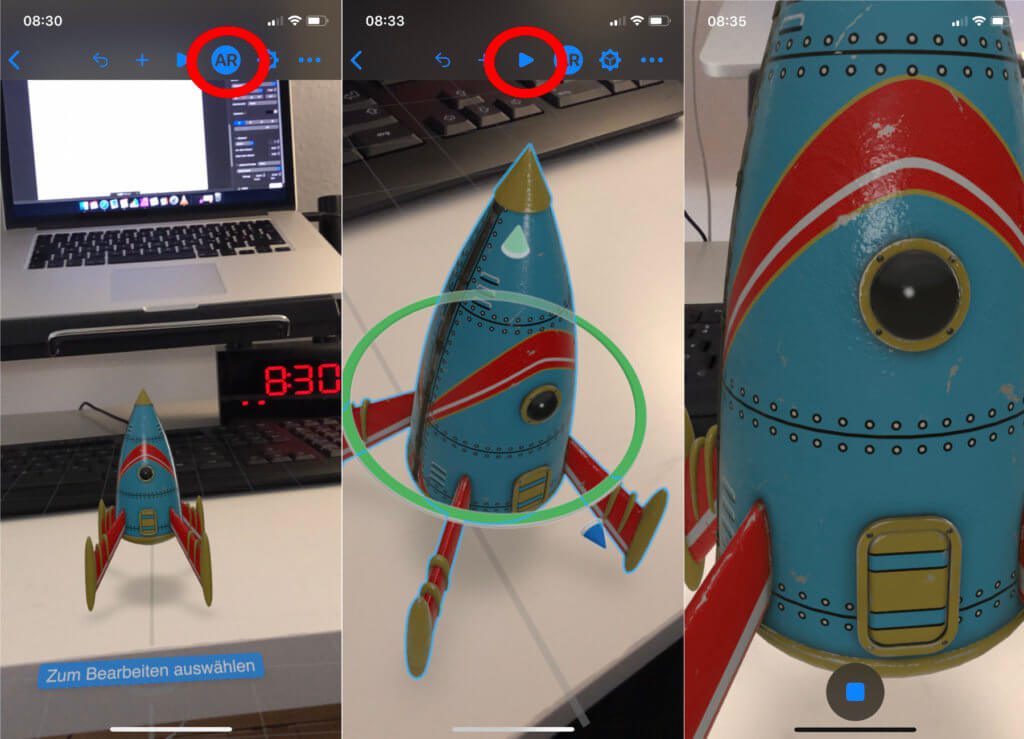 Do you work in a group on a creative project or just want to share your funny creations with your family, then you can do that directly from the app. For example, iMessage or AirDrop use. Developers can also integrate the project into Xcode. To share, simply select the three dots on the right in the toolbar and the “Export” item in the following menu. Now you can choose how and with whom you want to share your creation from Reality Composer.

Apple Reality Composer - Instructions for example project in the video

I have an English-speaking example of the rocket taking off Video taken from the YouTube channel “Apple Support”, which I will include you in the following. There you can see again in the moving image which steps are necessary to create a project, to place an object and to create an animation. Based on the step-by-step explanation for beginners presented here, you can now tackle your own, individual projects for the AR world. I wish you lots of success and fun;)