Return of the Tentacle: DotT sequel with free download 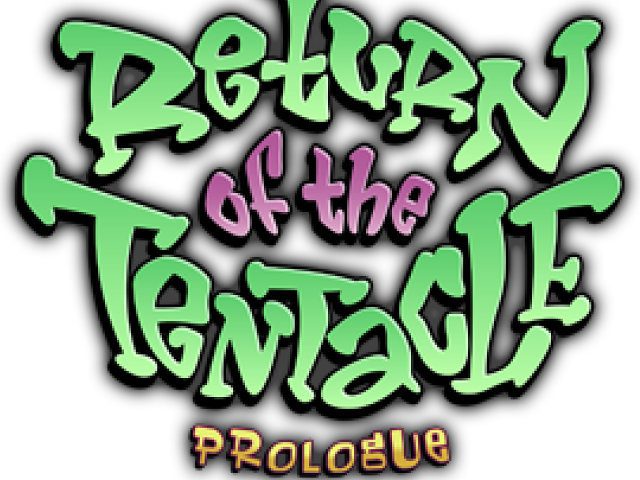 As in the article about two years ago Day of the Tentacle Remastered described, four keen fans started the ambitious project in their spare time to create a second part of the point-and-click adventure published in 1993. In Return of the tentacle, or in short: RotT, “purple tentacle” returns and wants to usurp not only the rule over the world, but over the whole universe. On Saturday, July 21, 2018, the prologue of the game came out - 25 years after DotT. I played it for you guys. 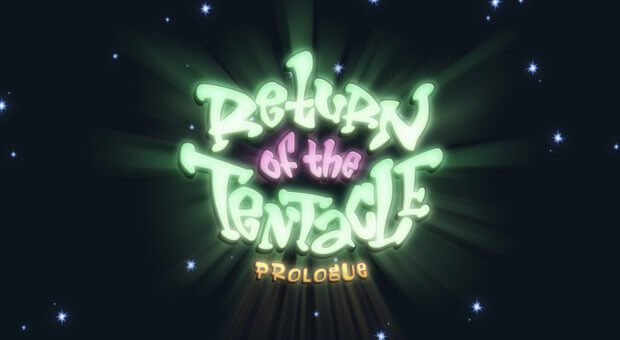 Get Return of the Tentacle by downloading it for free on your Mac or PC - that's possible now, at least with the prologue. The RotT voice output is possible in German and English.

Return of the Tentacle - “just” a prologue

Currently there are Return of the Tentacle Version 1.0what with the subtitle "Prolog" or "Prologue"   as well as with voice output in German and English. The subtitle refers to the fact that the four main people involved in the project got the game done by some point in the adventure. The prologue to RotT includes the recent meeting of physics freak Bernard, heavy metal roadie Hoagie and medical student Laverne with Dr. Fred. The timing: two years after the first adventure. There are already some puzzles to be solved and old friends to meet again.

But when it comes to really taking action against purple and putting an end to his megalomaniac plans, there is a cut in the game. The three protagonists step into the picture, which is otherwise black, and explain that the developers' free time has so far not been enough to realize the full scope of Return of the Tentacle. But you are welcome to send them feedback. 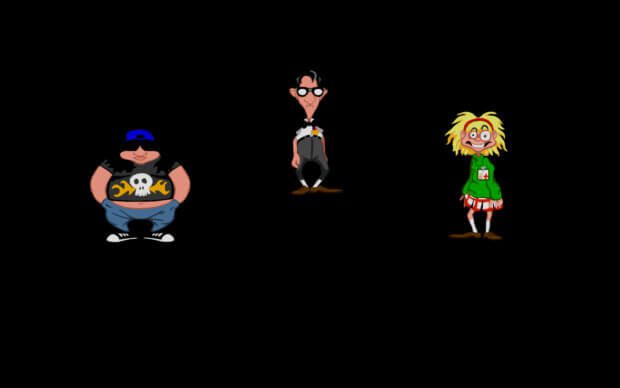 At the end of Return of the Tentacle Prologue there is a reference to the development of the game by Bernhard, Hoagie and Laverne. Then the credits roll.

Since Saturday, July 21, 2018, there is now a free download of Return of the Tentacle Prologue. You can find this for macOS, Linux and Windows (32-bit and 64-bit) on the itch.io page. At the bottom of the linked website there are download links for all four versions of the approximately 1 GB game. This will keep you captivated for a short time in the unique flair of the old point-and-click adventures from LucasArts. Among other things, because there is a very funny cameo of two previously unfamiliar characters. Overall, depending on how fast you can solve individual puzzles and create objects, you can count on a game that will keep you busy for an hour or two.

Note: You may have to activate the use of apps that were not downloaded from the App Store or specifically enable them for RotT. System Settings -> Security -> General

After hearing about the free download option about three hours after it was released, I downloaded the game for macOS. On Saturday I also wanted to take the time to at least play the game. But since it is "only" a prologue (and a very successful one), I played it through very quickly. It has been shown that this preliminary, first version of the second part of Day of the Tentacle was designed with great attention to detail and the first part. You feel right at home in the Edison motel and, if you want, you can switch from Ultra-HD to pixel graphics on Ed's computer to feel even more like a step back in time. 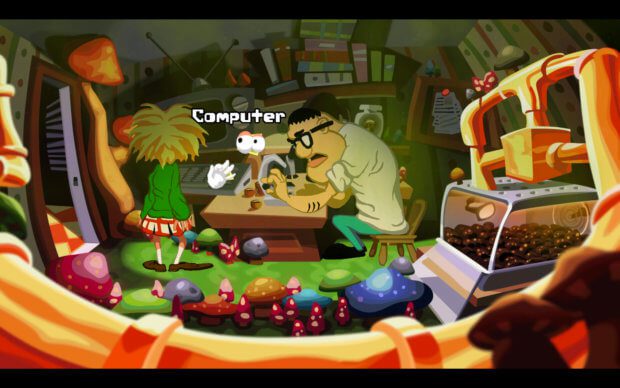 In RotT, stamps are no longer collected, but mushrooms. In addition, the computer is no longer used to gamble Maniac Mansion ... 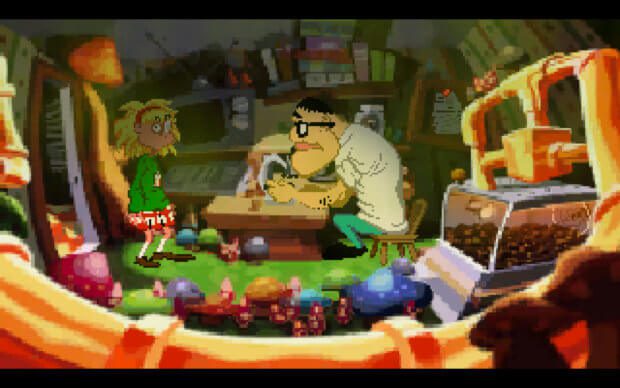 ... but the change from HD to pixel graphics.

I don't want to retell the story here. Just this much: Bernhard receives a letter in which the purple tentacle announces his comeback and threatens to kill him as well as Hoagie and Laverne. With the help of Prof. Edison, Bernhard wants to prevent this, which brings new time travel with it. It turns out that there are several twists in the whole story, which in one moment indicate that purple is not back after all, and in the other reveal that there is a danger from the tentacle. There is also the hamster, who played a role 25 years ago (or two years ago in the story), a rabbit, a dog, a mole and so on. 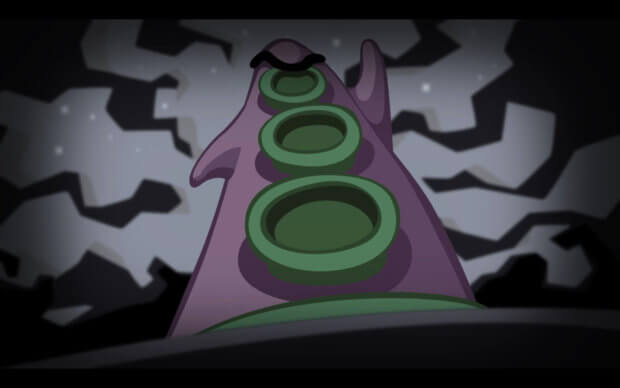 Is Purple Tentacle Back? And how can he take over the world again?

At the end there is still a small graphic glitch. In one of the last scenes, a cut scene, a letter is handed in at the motel in which Purple reveals his new plans - similar to the one at the beginning of the game. I do not want to anticipate why there are two letters. So back to the graphic error: when Prof. Fred receives the purple letter and reads it to the three heroes, he literally loses his head. This can no longer be seen and you only get to see the neck, which apparently reveals the content of the letter from Purple. But that is also the only mistake that I could spot in the game (Mac version) - otherwise everything works fine. 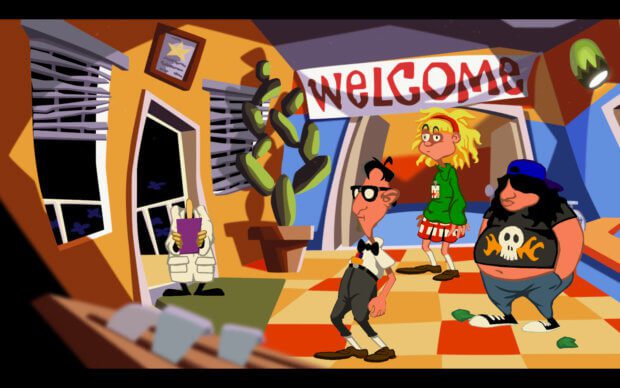 Recommended reading: Why you should never download apps from CHIP, Softonic and Co.!

Return of the tentacle is a extremely ambitious project by fans who want to create a second part of the LucasArts game "Day of the Tentacle", published in 1993. After years of development and a quarter of a century after the original title, at least the prologue of the game is now available for free download. It's fun to dive back into the world of the "Maniac Mansion" sequel for a short time. And it makes you want more.

I think that the makers behind RotT could give up their current jobs through a corresponding crowdfunding campaign and concentrate completely on the game. Even without a campaign, a studio should be willing to pay them - with the good work they did on Saturday ... At least I want to see (and play) more: D