Incredible, but true: The EasyAcc X100 are next to mine AirPods the first true wireless headphones that I tried. Among other things, this is probably due to the fact that most models are so-called final in-ear headphones that you put into your ear canal. My ears are only suitable for this technique to a limited extent, as it always takes ten to twenty seconds for them to sit properly. 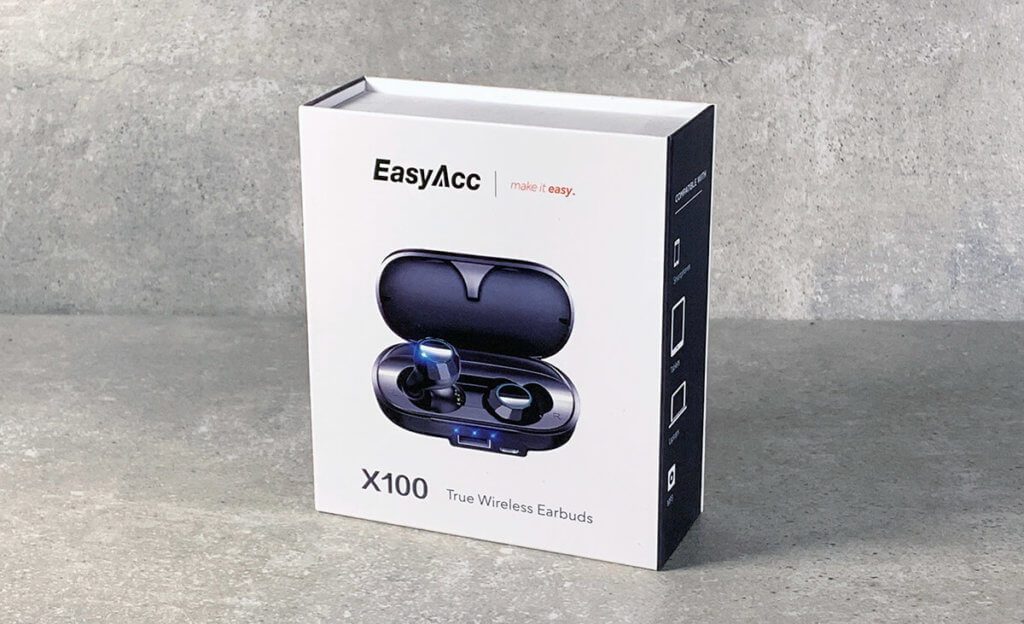 Technical data of the EasyAcc X100 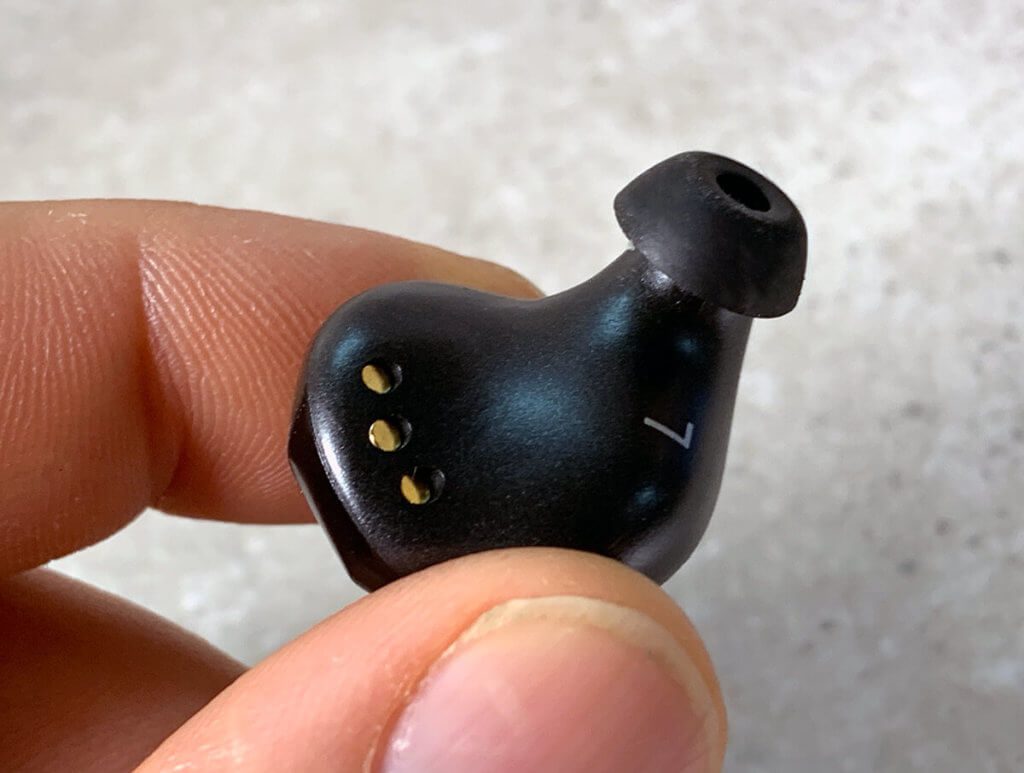 The earphones of the X100 can also be used individually. Each device is marked with an L or R so that you don't have to spend a long time trying to find out where to put it in.

The EasyAcc X100 come in a charging case and a micro USB charging cable. The scope of delivery also includes a protective bag and a collection of six silicone ear plugs with which the headphones can be adapted to different ear anatomies. 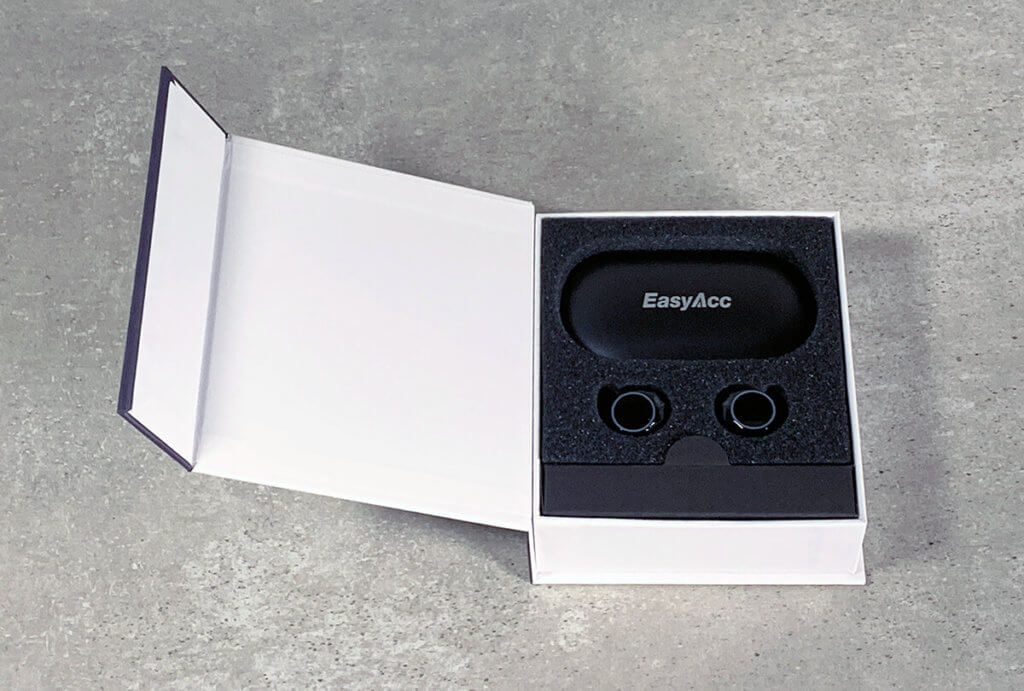 It also looks tidy inside the pack. The accessories such as the charging cable and silicone plug are housed under the foam or in a dark cardboard box on the edge.

Before you can start with the EasyAcc X100, you have to couple it with your audio device. If you take the earphones out of the charging case for the first time, they go directly into pairing mode and you can see them, for example, on the iPhone in the Bluetooth settings. If you now connect them to the iPhone, you will hear the status messages "pairing right channel" and "pairing left channel". Pairing is now over.

Here's a note: The volume at which the status messages of the earphones are played is very pleasant. I already had other headphones, the audio messages were so loud (regardless of the volume level) that you always wanted to tear the earplugs out of your ears when a message came. This is not the case at all with the EasyAcc X100. Everything is easy to understand and spoken at a normal volume.

If you want to cancel the pairing and pair the devices with another Bluetooth source, press the buttons on both earplugs for 5 seconds until both LED rings flash red. 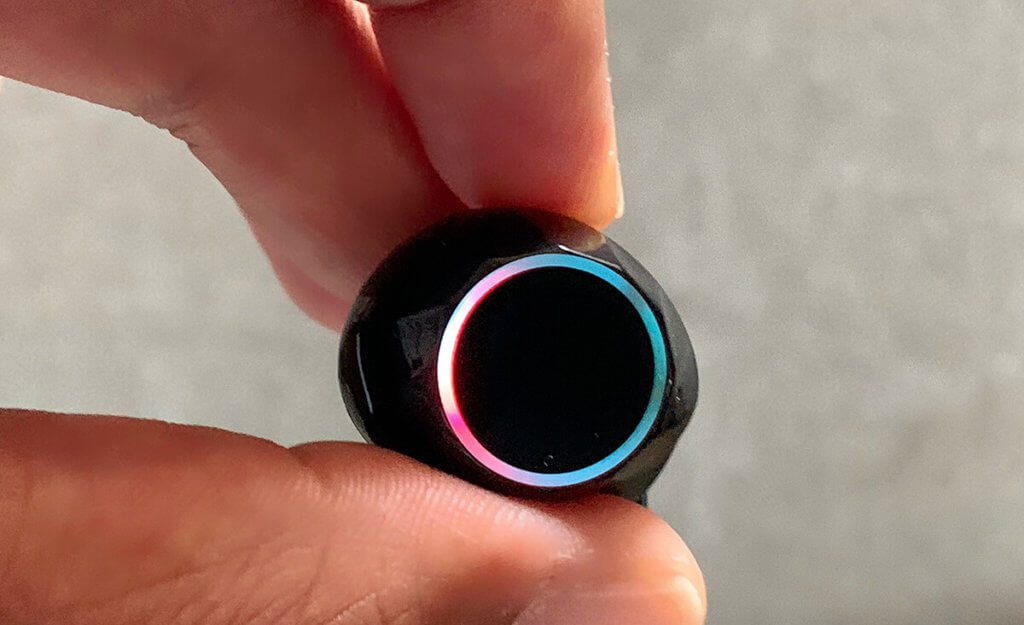 The EasyAcc X100 is operated via a touch-sensitive surface on the outside of the earplugs. If you tap this area twice - it doesn't matter whether you tap on the left or right earbud - you activate Siri. As usual with the AirPods, commands such as "louder" or "quieter" as well as "next song" or others can also be sent with the EasyAcc X100.

While there are no touch commands for changing the volume, you can control the following things by tapping:

Since the EasyAcc X100 have a built-in microphone, it makes sense to use it for making calls. The following commands apply here: 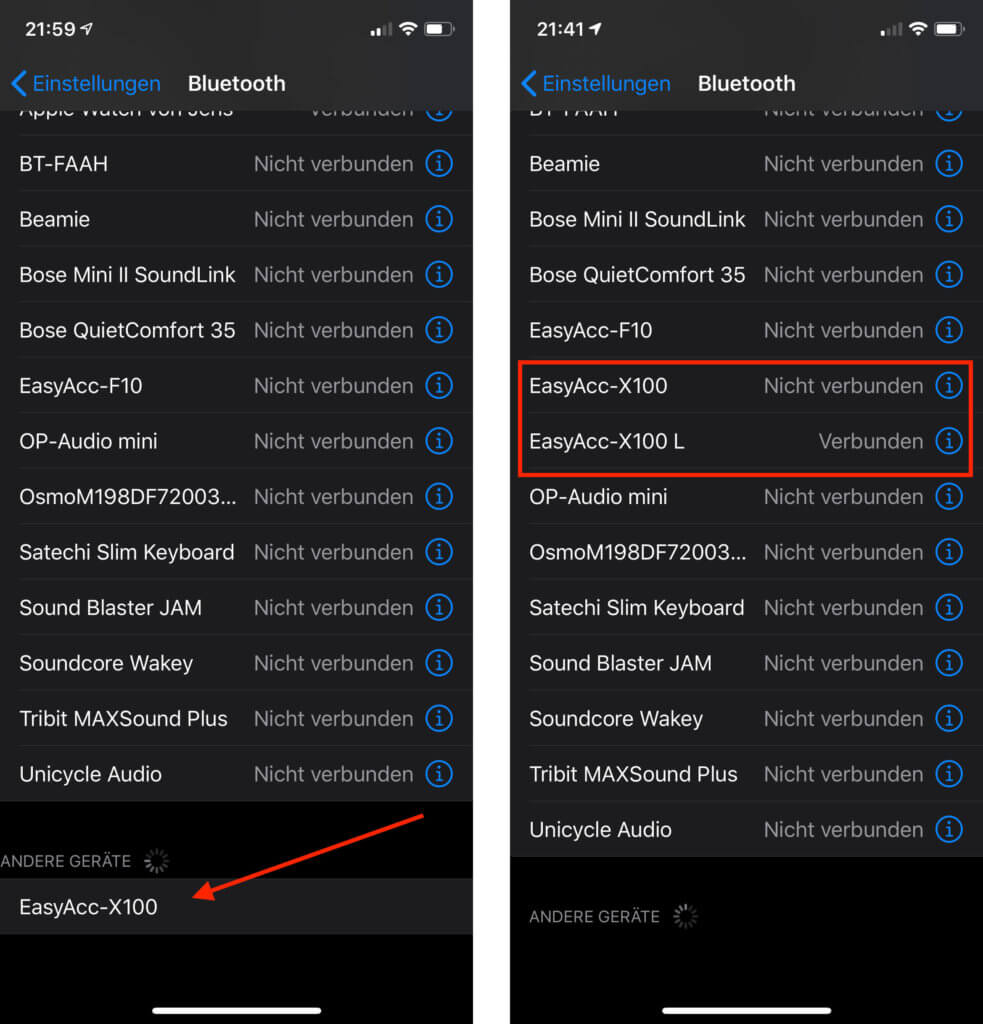 Immediately after being removed from the package, the EasyAcc X100 are already in pairing mode and appear in the list of Bluetooth devices. In the screenshot on the right you can see that the earphones can also be used individually. In this case only the link (L) is connected.

Of course, I also tried activating Siri and various commands. When tapping, I had to press a little harder than I was used to with the AirPods. As a result, Siri was not activated as reliably as I would have liked. About every 4th to 5th time Siri wouldn't start for me.

But when the Apple assistant was active, she reliably understood and implemented all commands - at least to the extent that one is used to from Siri. But the EasyAcc True Wireless headphones can do relatively little for that. 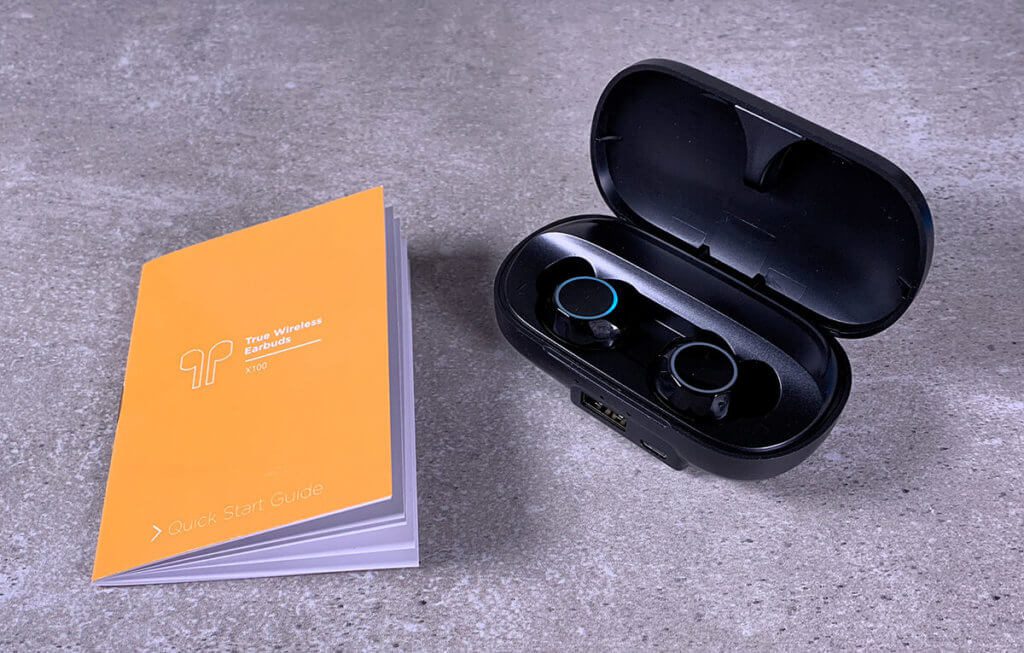 On the photo: The Quickstart Guide (also in DE) and the X100 in the charging case.

When I saw the brightly colored flashing LED rings on the earplugs, I thought at first that these things would do that all the time. Then you could hardly go out on the street with it. But I can reassure you: They only flash in pairing mode and otherwise only signal subtle inputs that you make via the button - that is, when you have your hand on the earphones anyway.

Otherwise, the True Wireless headphones from EasyAcc look elegant and pleasantly discreet. They have a slight diamond or snail structure on the surface, which makes them look classy up close. From a greater distance, however, they only look like black circles in the auricles and appear - even by my standards - relatively inconspicuous. 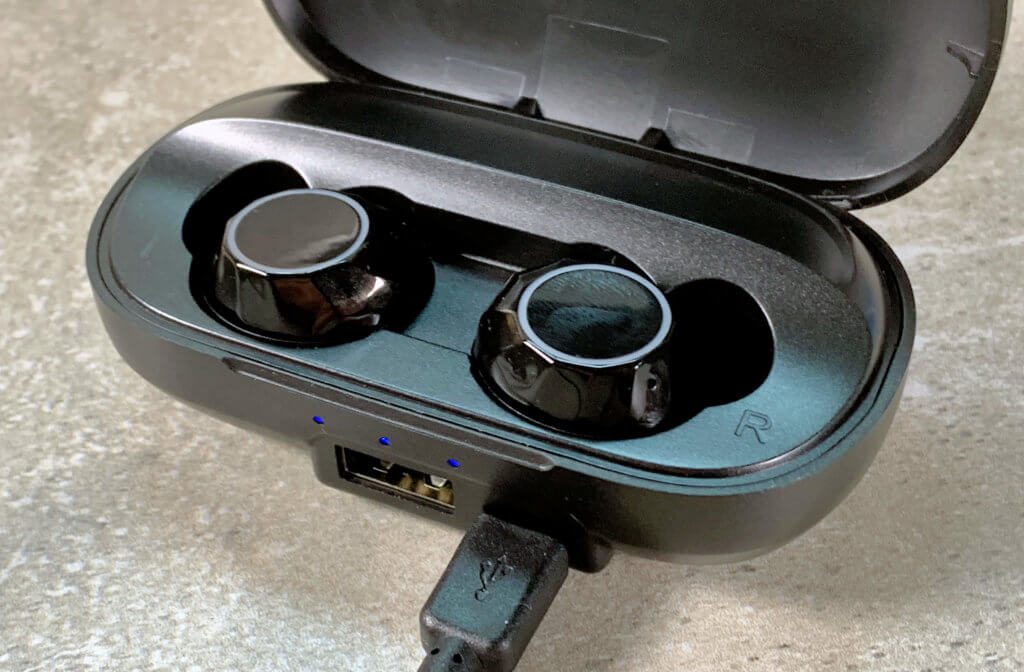 The charging case is fed with a micro-USB plug (a shame, no USB-C!). If you want to use it as a power bank, you can plug a USB-A charging cable into the other port.

The charging case, which is supplied with the EasyAcc X100, is two to three times as large as the case of the AirPods due to the larger built-in battery. Since it has rounded corners, it is still comfortable to carry in your pocket.

Another advantage of the EasyAcc charging case is that it also has a USB-A output so that it can be used as a power bank for another device in an emergency. With 2600 mAh you don't get an iPhone full, but you can certainly improve the battery level by a few percentage points. 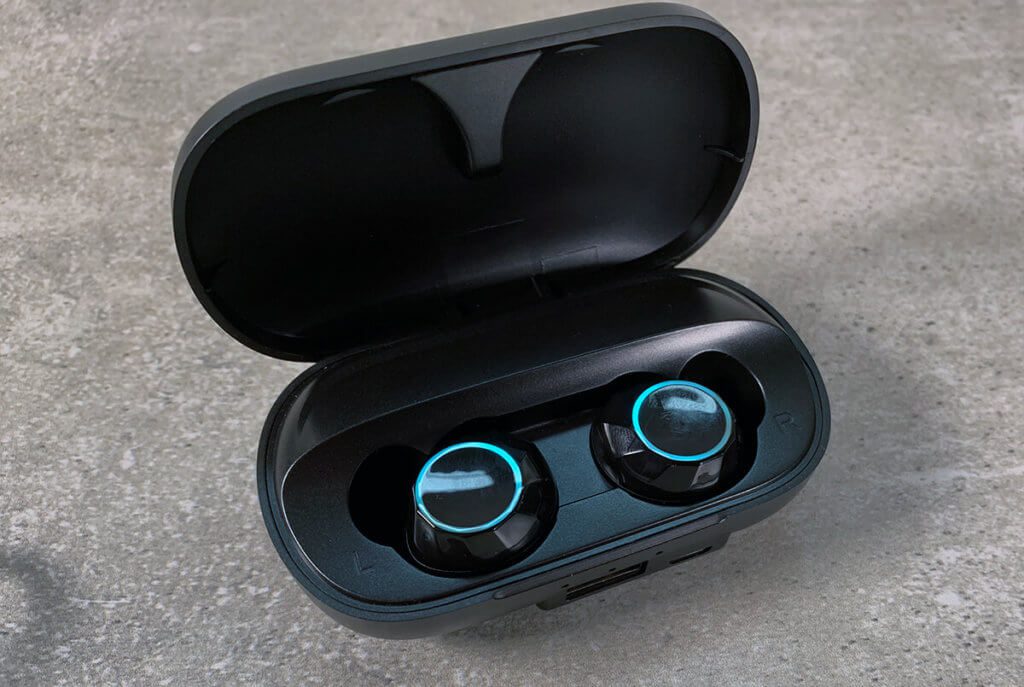 No battery indicator for the earbuds

EasyAcc specifies three hours as the playing time for the X100 - the same value that Apple also mentions for the AirPods. Since the earbuds do not have their own battery indicator and also do not transmit battery information to the iPhone, there is no way to see how much juice they have left.

When the earbuds are slowly running empty, they output the message "low battery" every two minutes and the LED ring briefly flashes red once. 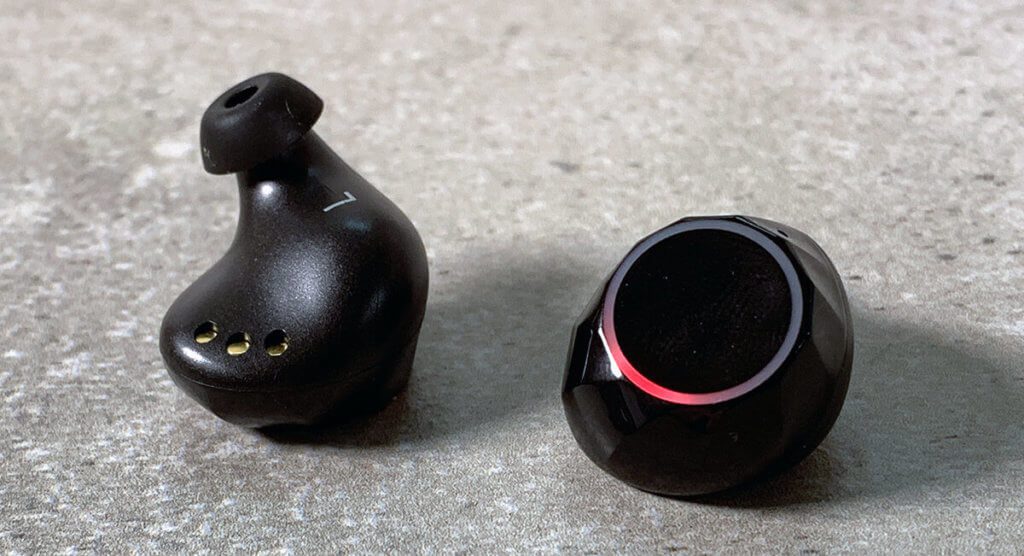 The briefly flashing red ring indicates that the battery level is low.

The sound of the True Wireless headphones is very good. It is particularly pleasant that there are no "clanging heights". This is almost unbearable with sealed in-ear headphones.

With the EasyAcc X100, however, the sound is nicely round and balanced. Due to the in-ear construction, the bass is also nice and powerful. So there is nothing to complain about here - especially when you consider the price of just under 40 EUR.

I haven't tried the quality of phone calls.

A big question with such true wireless headphones is always whether they can be worn while exercising. I can say yes with a clear conscience, because the earplugs sit securely in the eavesdroppers and made no move to fall out when I hopped and twisted - in contrast to the AirPods, which I would have lost three times.

The EasyAcc X100 are also well positioned when it comes to rain and sweat, because the IPX6 protection class states that they can withstand such attacks without any problems. So good news for all athletes who like to jog through the rain and sweat their hearts out in the process. 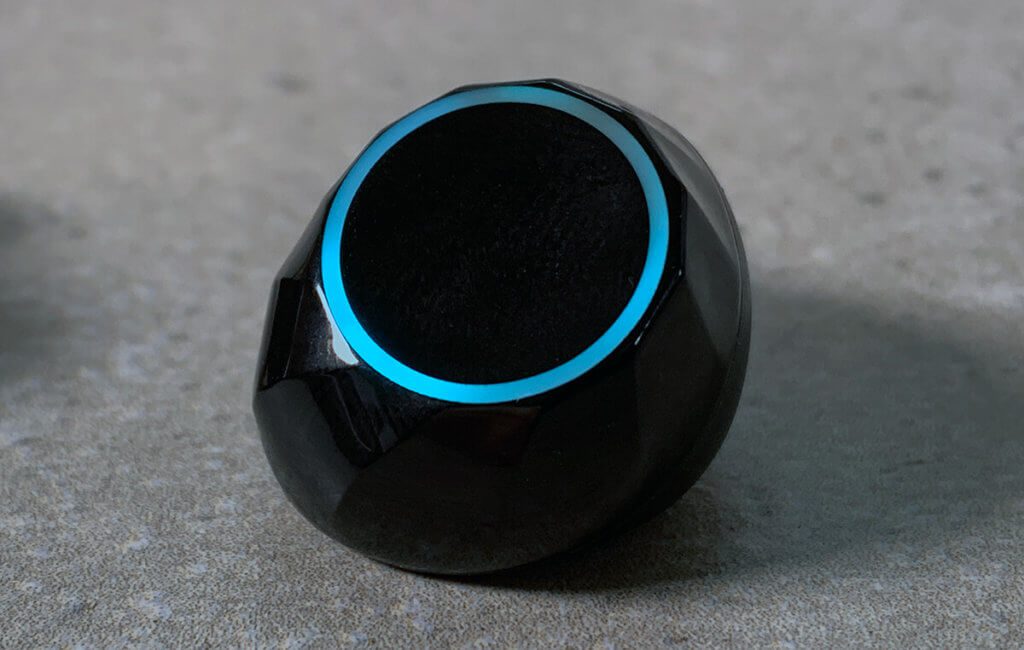 Thanks to their round design, the EasyAcc X100 sit perfectly in the auricle and cannot be moved out even during sporting activities.

Even if I'm not a big fan of in-ear headphones, the EasyAcc X100 can only be given a very good rating. They are very user-friendly and wait for the user in pairing mode after unpacking so that they can be paired.

The operation with the touch field is intuitive and works very reliably (except for the double taps, which I somehow can't get right). Of course, it's great that you can use Siri to change the volume or do other things.

Incidentally, the playing time of around 3 hours is the same as that achieved with Apple's AirPods. And since the sound is also relatively convincing, nothing prevents me from recommending the True Wireless in-ear headphones.

The EasyAcc X100 is still available at half price until December 31.12.2019, XNUMX. To get the offer, go via this link and enter the code "TWS50FANS" at the checkout.

If you are interested in the EasyAcc X100, you will find it here at Amazon or you can use this product box to get to the capital A: 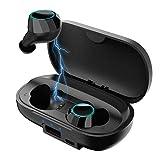 EasyAcc donated me a model of the in-ears for the raffle. This will take place in my newsletter within the next few weeks. If you want to participate, the best thing to do is to sign up there and you will be presented with the winning question in one of my weekly newsletters.

Instructions for the EasyAcc X100

If you need help setting up or pairing the earbuds, the operating instructions for the True Wireless headphones are sure to help. For this reason I have included them here as photos for you. 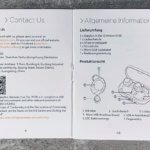 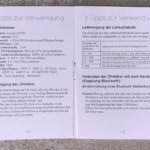 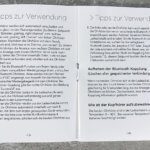 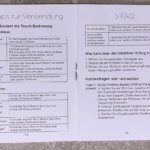 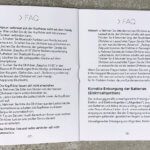 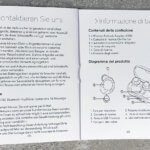