If you want to record good video quality as well as the best sound with your DSLR camera or iPhone or do an interview, you need the appropriate microphones. I recently looked for such microphones for voice recordings, interviews, and podcast situations. As a wireless microphone solution with a receiver for several microphones, the sets are named above all for me Rode Wireless Go and Saramonic Blink 500 noticed positively. But where exactly are the differences and what are the advantages and disadvantages of the two wireless systems with lavalier compatibility? I have summarized my findings here.

Røde Wireless Go vs. Saramonic Blink 500. Both wireless microphone systems have advantages and disadvantages. I have summarized these for you in this post. Image source: Manufacturer / Amazon

The Røde Wireless Go is a very clear set that comes with a transmitter, a receiver, a connection cable (for receiver and camera / iPhone / audio console) and a windshield. Okay, a transport bag and a charging cable are also included - but that's it in the standard version. There is also a set with a lavalier microphone, but this is much more expensive. If you only need a microphone and are satisfied with the integrated model of the transmitter, you can buy it here. The wireless transmission of the audio signal is realized via 2,4 GHz WLAN and is possible up to 70 m in the line of sight. The simple set costs currently € 174,10 at Amazon; with microphone it currently costs already 282,90 €. 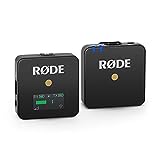 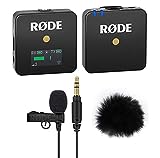 Information about the Saramonic Blink 500 sets

A standard set looks much more extensive here: in addition to a receiver, there are two transmitters with built-in microphones. It also includes two lavalier microphones, a connection cable and a charging cable. There are also different set variations, for example with a USB-C receiver for Android smartphones and iPad Pro or a Lightning receiver for iPhone, iPod touch and iPad. Here, too, you transmit via 2,4 GHz WLAN. The standard set with a jack connection for the DSLR camera, the sound module on the set or for another recording device costs currently € 298,80 on Amazon. The iPhone set, which offers a receiver with a Lightning connector, can be for € 334,80 now. For the comparison to the Rode it is important that the lavalier microphones are already included! 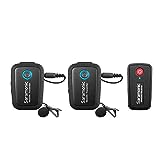 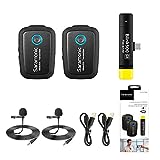 The radio microphone model from Røde (also sometimes written Rode) is therefore slimmed down, and the one from Saramonic can basically be used directly for two people - without a bulky microphone in the picture, because the small clip-on microphones are already included.

The second sticking point is that the Røde cannot be upgraded with a second transmitter. This makes an interview situation difficult to implement. However, if you just want to record your own audio, the Røde Wireless Go with a windshield - even without an additional clip-on microphone - delivers a very good sound, which I have heard from some Youtubers who I know use the microphone.

But how does the Saramonic wireless microphone sound compared to the Røde? Max Yuryev answered this and a few other questions on his YouTube channel. In one Video he compares the mentioned sets extensively. I'm not really an audio professional, so I don't see that much of a difference. With the right settings, both should be very suitable for video, voice and interview recordings.

But see for yourself:

Advantages and disadvantages of the two wireless microphone systems

Although that Rode Wireless Go only comes with a simple equipment and without a clip-on microphone, it has the advantage that the receiver's own battery level and the battery level of the transmitter are displayed on the receiver. The signal strength of the radio connection and the audio level can also be seen here. In addition, settings for the sound and its recording can be set on the receiver - corrections can be made directly during the recording.

On the other hand, that can Saramonic Blink 500 come up with a great scope of delivery. Unfortunately, indicators of the critical battery level or other sensitivities are only communicated via LED lights. Here you have to remember which color or which light means what. In addition, the sound settings are more extensive, but must be made directly on the transmitters. A sound check before the important recording is therefore absolutely necessary.

If I only had the choice between these two systems, I would choose the Saramonic Blink 500 despite a few negative points in comparison. Everything you need to record a dialogue situation, an interview or the like is included for a reasonable price.

From my point of view, the Røde Wireless Go is intended more for people who know that they are only recording one person and not doing interviews. Despite the higher price of the overall package with clip-on microphone, the Røde's battery level indicator and other amenities impress me. But since dialogues are more likely to come into question if I should record a podcast, the Saramonic Blink 500 Set should be my choice. What's your opinion? Feel free to leave a comment! :)