Own FRITZ! Box with an existing connection: Free choice of router with Unitymedia and Co. 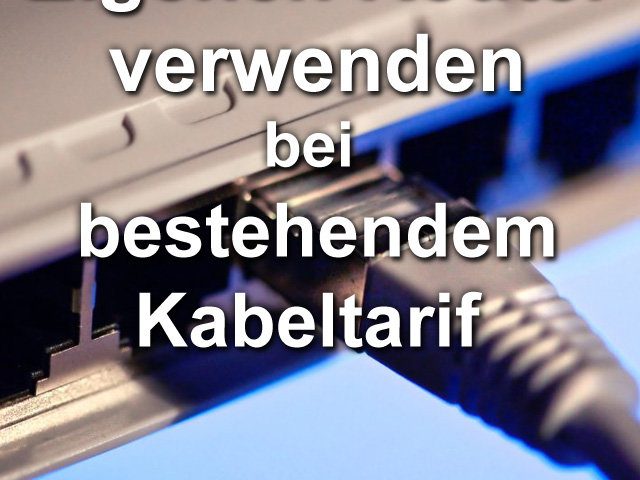 Router freedom - If you have your own router, such as a AVM FRITZ! BoxIf you want to connect to an existing cable connection, there are two or three things to consider. From Unitymedia to Vodafone Kabel Deutschland to primacom and other providers of cable internet, all of them had to do the so-called last year Router obligation but we are still a long way from plug and play. So here are a few tips for connecting your own router to the cable connection from Unitymedia and Co.

Your own FRITZ! Box with an existing connection: The free choice of router with Unitymedia and Co. makes this possible. Other cable routers such as those from Hitron etc. can also be set up.

Free choice of router: Use your own router for the Internet

Since August 2016 you can use a router of your choice for the internet connection, whether DSL, VDSL, cable or other solution. Some call it simple Free choice of router. Whoever has previously set the provider as Router obligation would be more of a designation Router freedom to tend. Be that as it may, integrating your own or newly purchased cable router is not that easy; Plug and Play is by no means to be spoken of. In the network you can often find the example of Unitymedia and the integration of a FRITZ! Box from AVM into an existing connection.

Example: Use your own FRITZ! Box with Unitymedia cable connection

Switching from one router to another with a DSL connection is pretty easy. However, if you are a cable customer and want to use a different box than the one suggested by the Internet provider, then there are small hurdles. For the technical changeover, the serial number and the hardware address or MAC address of the router. Unitymedia gives up the free choice of router this side or at 0221-46619100 information. AVM also provides information and details on the free use of a cable FRITZ! Box with various providers - click here.

How long will the changeover take?

According to several reports on the Internet, providers such as Unitymedia indicate a changeover time of up to 24 hours; however, everything can be done after a few minutes. As a test, the previous router can be left connected to the cable connection. If the new device is activated, you will notice this because the internet connection is interrupted. Then it's time to connect a new router and continue surfing with it.

Will the telephony be taken over automatically?

Not necessarily. If we take the example of Unitymedia again, customers report that separate information is required for both areas for telephony and Internet tariffs. You can either request the access data for VoIP telephony from the provider yourself or - and this is recommended by some - simply obtain it from the online customer center. To do this, follow the menu path My products -> Phone -> Details. The access data can also be used depending on the provider and source of information SIP credentials be called.

If you are looking to switch to a new cable router with WiFi, USB and other advantages, then this current bestseller list from Amazon may help you:

Conclusion on router freedom and your experiences

The router change or the free choice of router has been greatly simplified by the router freedom in Germany. Since the providers of Unitymedia and Vodafone via primacom and Tele Columbus to wilhelm.tel and NetCologne need the data from the new router, usage will initially be delayed somewhat. For example, do you want the new one AVM FRITZ! Box 6590 Cable use, then the AVM page linked above will help you. There you will also find the information pages and contact details of the providers mentioned.

Have you already integrated your own router into the cable network and replaced the "router compulsory" device with it? Then write as a comment how easy or difficult it was!