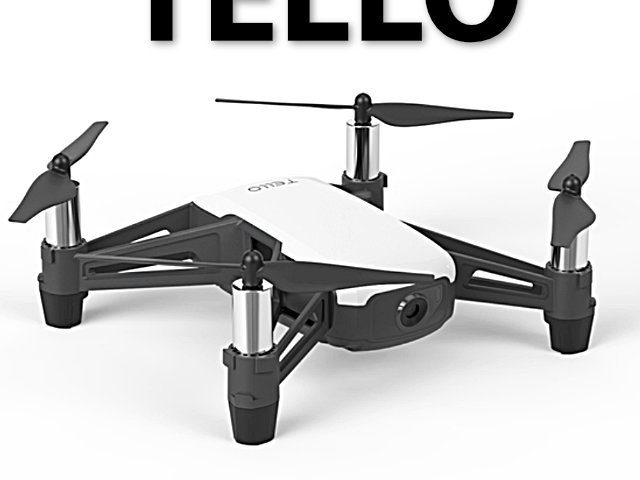 The Ryze DJI Tello drone is a small, light quadrocopter specially designed for the young target group. The plane is comparatively cheap and, in addition to a camera, also offers the opportunity to do tricks and learn to program. For children and teenagers interested in technology, flight and programming, the Tello drone is a good introduction to the relevant areas. Here I have summarized the technical data, the scope of delivery and further information about the aircraft.

The Ryze Tello drone with DJI technology and Intel CPU could also be called DJI Tello - it is cheap and stable - ideal for children and young people.

Okay, the term drone impact may be a bit clumsy, but it gets to the point. The Tello drone is actually from Ryze, but that DJI was heavily involved here is not only evident from the design and the fact that you have the drone buy in the DJI Shop can (on Amazon it is also available). It also sets itself apart from the competition from small toy drones in four other ways:

Active learning through programming with Scratch

In addition to the amenities already mentioned above, which distinguish the Ryze Tello drone with DJI technology from other inexpensive "toy" drones, you will also find the technical data, test videos of the drone and further information below. At this point I would like to emphasize one more important point that sets this quadrocopter for young people apart from cheap goods from the discounter: the possibility of getting into programming.

The scratch programming language developed by MIT allows users to program visually and thus tend to develop new functions for the drone. “The […] system allows children and teenagers to easily learn the basics of programming in a fun way. Advanced users can develop software applications using the Tello SDK, ”says von Ryze. In addition, individual accessories can be developed for the Tello - i.e. hardware as well as software.

Here I have put together a small data sheet with technical data of the Ryze DJI Tello drone for you. In addition to dimensions, weight and battery life in flight, the overview also provides a few details on flight, recording and stunt functions: 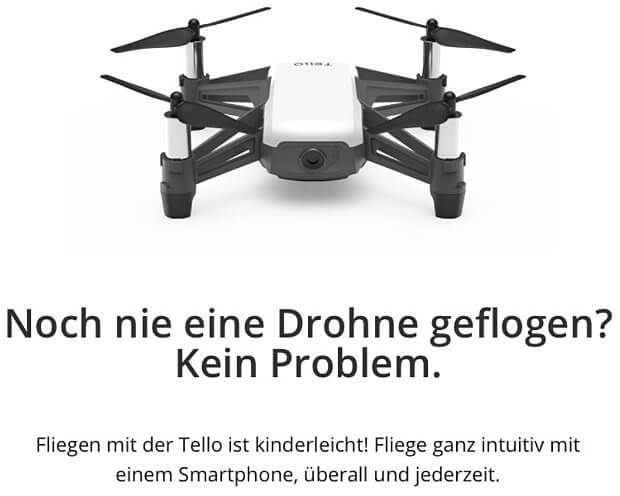 You get this in a small package if you decide to order the Ryze DJI Tello:

I picked out a few videos from YouTube for you, which contain tests and sample recordings of the Tello drone. So if you are thinking of buying the Ryze DJI Tello drone, with this information you will get food for or against the final purchase decision;) By the way: The TELLO app is also mentioned in the first two videos. You can find this for iOS in Apple App Store and for Android in Google Play Store.

No gimbal, no panning of the camera

Anyone who has taken a close look at the Tello drone will notice that the camera is firmly seated in the housing and that the image is "only" kept straight by electronic stabilization and not by a gimbal. If you are looking for a small, compact drone with a 3-axis gimbal, you should go to the DJI Mavic Air or to the DJI Spark to grab. Panning the camera with the drone in the same position is also not possible with the Tello. However, the videos above show that this shouldn't be a problem for hobby users. There are still quite usable photos and videos coming out of the device.

Many private hobby pilots and, above all, first-time users want a cheap drone to get started and are then perhaps disappointed that the promotional model for 29,99 euros from the discounter can only get through two flights. With much higher stability, better technology and useful functions as well as additional added value through the possibility of learning programming to a certain extent, the Ryze Tello drone with DJI technology and Intel processor literally storms the market in this segment. So you'd better add a few more euros and start your life as a drone pilot happier;)

Memory card for the Ryze Tello?

A reader asked me today if there was a way to slide a memory card into the Ryze Tello drone. The manufacturer did not plan this, however, because there is no SD card slot. Instead, the drone uses the memory of the connected smartphone for the photo and video data. With the iPhone, all image data is saved in the Tello app.