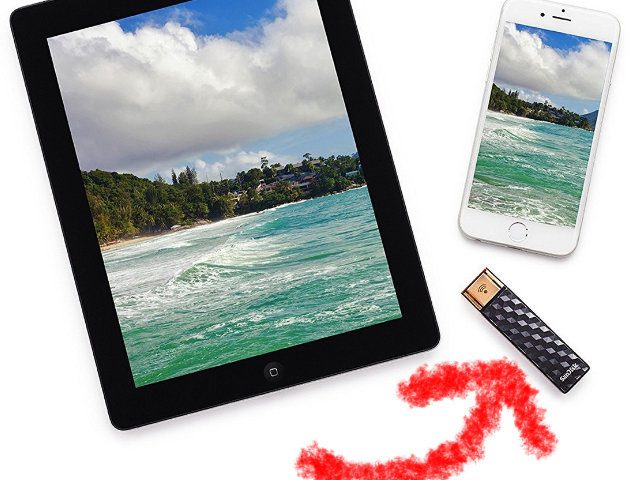 The SanDisk Connect Wireless Stick is a mobile flash memory with a USB connection and WLAN function. Up to three devices can be paired with it on the go in order to store, call up and move files and folders. For example, if you have a small and cheap alternative to the LaCie DJI Copilot BOSS hard drive is looking to extract the photos and videos from the Apple iPhone or iPad via app while on the move, then this WiFi USB stick could be the right solution. Movies can also be streamed to multiple devices from the stick. App and functions are also available for Android.

The SanDisk Connect Wireless Stick is a USB stick with WLAN for iPhone, iPod, iPad, Mac, Android devices and PC.

The SanDisk Connect Wireless Stick creates a local radio network in which up to three devices can log in at the same time - cell phone, tablet, computer and so on. Equipped with the appropriate app from the manufacturer, you can then store or call up files, create folders and thus sort data. The WiFi USB stick is not only suitable for vacation or travel, but also for everyday backups on the go. You can buy the SanDisk Connect Wireless Stick at Amazon - in 16GB, 32GB, 64GB, 128GB, 200GB and 256GB versions.

Wifi stick for wireless data exchange
You can buy the SanDisk Connect Wireless Stick on this product page with either 16 GB, 32 GB, 64 GB, 128 GB, 200 GB and 256 GB - depending on the version in black or white. Data can be exchanged with mobile devices via a wireless network.
130,00 EUR
Buy it at Amazon Price includes VAT, plus shipping costs (updated: 21.01.2022 at 09: 00 clock)
Tip: clean up your Mac with CleanMyMac

Features of the WiFi stick for on the go

Here are a few of the most important features of SanDisk's mobile storage, which can save you from lugging around external hard drives and cables when traveling, on vacation and everywhere else:

If you take a lot of photos and videos with your iPhone or iPad - for example on vacation with your family - then the SanDisk WiFi stick can be ideal for storing files. So you can record many activities, sights and the fun of the children every day without worrying about the storage space. You can also have fun with the children on the outward and return journey by having a few films on the stick ready and making them available to the children on the trip. If necessary, you can simply use two separate sticks for films and data backup.

How the stick performed in the test by Amazon users, there are among other things with these statements on the product page to read:

“I have an Ipad, which I also use for work. Unfortunately, I bought the 16 GB version and have regretted it many times in the past. Now I've come across this thing. It works great with the app, I can now carry all files around with me and have them ready if necessary. I think that thing is great. "

“I bought the stick for vacation. At home I loaded a few films and music onto the stick for the trip. I could easily back up my photos while on vacation. The WLAN was found without any difficulties and several devices could access the stick in parallel (e.g. watching 2 films on 2 devices at the same time). I tested it with an iPhone, iPad and Macbook. All of my expectations were met and I am happy to recommend this memory expansion. "

There are also some negative product reviews - of course you shouldn't hide that. Especially with Android, the app and device seem to work only adequately or poorly and with disconnections. Some users also complain about the "slow" speed of data transfer. I find that inappropriate, however; After all, you shouldn't expect any miracles from a USB stick that sets up a wireless network via a battery. The transfer of pictures and videos from the iPhone to the USB stick then takes a while ... 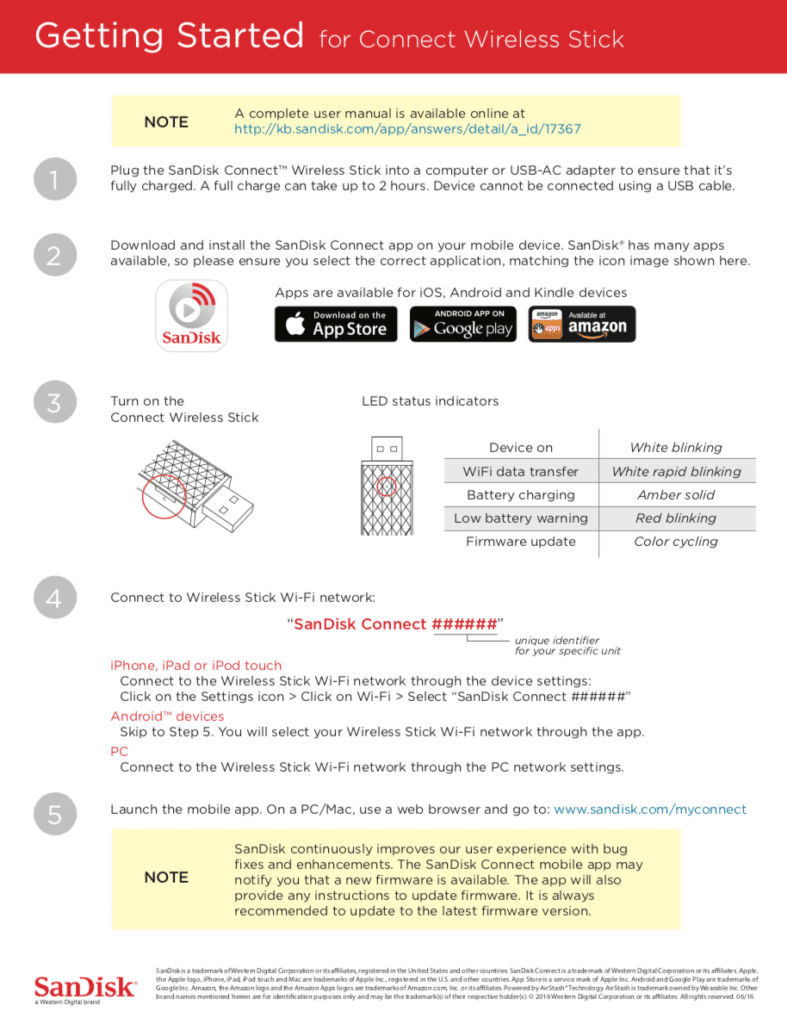 First of all: Unfortunately I could not find any operating instructions in German. But there are three documents that are intended for users who want to use the Wireless Connect Stick - but in English.

Firmware updates, further instructions and the links to the iOS and Android apps can be found at this page at SanDisk. Above I have included the short instructions in English as a screenshot. So you can already see what the status LED shows and how you can connect to the stick's WiFi.