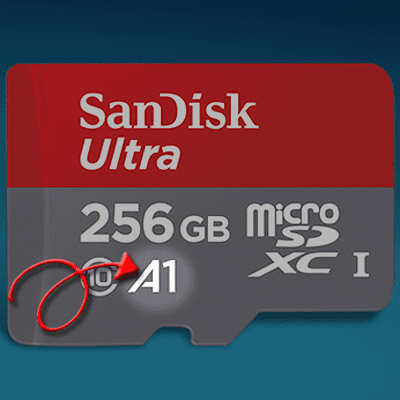 Granted, the title SanDisk Ultra 256 GB microSD card with Application Performance Class Standard A1 is a word monster that should bring some explanation. And this is exactly what you will find in this post. Here I would like to introduce you to the latest hit with regard to microSD memory cards from SanDisk and Western Digital. The little one on the CES 2017 The marvel presented here, which is intended to help store apps in smartphones in particular, brings the new A1 standard with it, i.e. a high application performance class. I have also summarized the specifications for you below.

SanDisk Ultra microSD with A1 standard for app outsourcing

At CES 2017 as well as in the form of an official press report SanDisk, the developer and manufacturer of memory cards belonging to Western Digital, presented a new microSD card with Class 10, i.e. up to 95 MB / s. The SanDisk memory card, which is or will be available in versions with up to 256 GB capacity, also brings the A1 standard the newly created Application performance class With. This standard shows the possibility of using the memory card in a smartphone or tablet in order to outsource apps there. The apps installed on the card and called up by it should run smoothly with A1 microSD cards and without any other disruptions.

Here are the technical specifications of the new SanDisk Ultra card and how it can be used. This SanDisk Ultra can and should not only be used for smartphones and tablets and their app outsourcing, but also for video recordings in Full HD (or higher) and transmission (if necessary via USB card reader):

Requirements for the SanDisk Ultra for the A1 standard

The up to 95 MB / s can also be interpreted as an indication that apps on smartphones and tablets can run as smoothly with this card as when using the internal flash memory, for example. However, the requirements for the App Performance Class A1 show even more specifications that are due to the Speed ​​Class 10 cannot be revealed. So for the A1 standard a IOPS A value of 500 when reading and 1.500 when writing can be achieved. IOPS stands for Input/Output Operations Per Second. Has details on this Wiki.

So far, the new SanDisk with A1 cannot be purchased (in Germany). However, there are already quite astonishing microSD cards under the name SanDisk Ultra, which are not only Class 10, but also come with an adapter for SD card slots. Due to the extreme data rate of the cards, they are also suitable for exporting data to mobile devices and cameras. This SanDisk Ultra® 256 GB microSDXC memory card, for example, already comes close to the new A1 card (but has been on Amazon since July 29, 2016; so it is not the product presented here):

On the Amazon product page, which you come to when you click the link above, you will also find the other models of the SanDisk Ultra memory card with 16GB, 32GB, 64GB, 128GB and 200GB each. To make the decision easier for you and to make the comparison easier, I've packed the individual memory cards in additional Amazon boxes:

Sure, on Mac, iMac, MacBook, MacBook Pro and other Apple computers you can use USB and a card reader who use SanDisk products. With USB 3.1 Type C resp. Thunderbolt 3 Extreme data rates are also shown directly and you can transfer photos and videos quickly. However, it is questionable whether Apple will take pity on the iPhone, iPad, iPod and Co to allow memory cards as an extension of the internal storage. Then the individual versions of individual models would be omitted, but that shouldn't really be such a big problem.