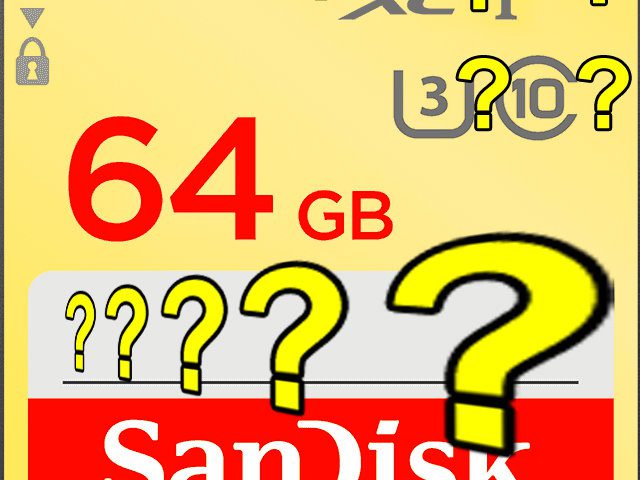 Such an SD card, which is used as a memory card in the camera, a smartphone, tablet or other device, is full of names, abbreviations and symbols. But what do the characters, symbols and numbers on the SD memory card mean? I would like to explain that in this little guide. In the end, you will know exactly what C, I, A, V, UHS and the other abbreviations on the SD card are all about - and which is best for your devices.

A few names and abbreviations of the SD card decoded - details can be found here in the guide.

Information on the SD card

When decoding the names on an SD memory card, let's take a systematic approach. First of all, we want to know how much space is actually on the card, then the transfer rate is important for the data. Then details such as UHS, U1 and U3 as well as other abbreviations should be clarified. Sounds good? Let's go:

The capacity of the storage medium

Exactly how many GB the card offers for your devices and data is usually very big on it - most people pay attention to that first.

While it used to be about Full HD videos for which you should buy Class 10 cards, today you are beyond the class designations. Names like U1, U2 and U3 are important if you want to make not only Full HD, but UHD or 4K recordings or even shoot 8K films and save them on the SD card. Here are the individual designations with the minimum achievable data rate:

There are additional specifications for the data transmission system (bus) that can be noted on the SD memory card. Usually the designation UHS (Ultra High Speed) is not in front, but only a Roman numeral I, II or III is given. And that's behind it:

SD memory cards with UHS marking are quite compatible with SDXC and SDHC devices. If there is no label I, II or III, then the data rate is probably reduced; depending on the class or U marking.

In addition to the number in U (U1 or U3) or the number in C (Class), there is also the option of your memory card showing a V and / or an A with a numerical value behind it. There are also logical explanations for this;) The V gives the minimum speed (Video speed class) when writing videos to:

The A stands for that Application Performance Class the memory card, i.e. for storing and running apps on smartphones and tablets. So far there are two A classes for memory cards:

WLAN SD card with own names

In addition to the regular memory card, as I have broken it down here, there are also SD memory cards with WiFi functionality. Such a WLAN SD card usually also has the name of the manufacturer and an inscription "Wifi"Or" Wifi "or" Wi-Fi "with. Various manufacturers / brands (Wi-Fi SD card from Transcend, FlashAir from Toshiba, Eye-Fi Card, etc.) offer such cards. If you are looking for more information and examples for a WLAN SD card, then I recommend this post here in the blog: Wifi SD card: WLAN memory card for cameras, camcorders, dongles and more