[Solved] The best SD card for the DJI Mini 3 Pro

When I ordered my DJI Mini 3 Pro, it was already clear to me that DJI would not supply an SD card. Why you don't get a memory card with such a drone is still a mystery to me. After all, it's not a nice user experience to take the device with you on a flight only to find out on the first flight that you can't record film or photos. The 10 euros for a small memory card would be a good investment.

The DJI Mini (here an older model) should be equipped with U3/V30 microSD memory cards due to the high bit rate and resolution.

But ok, at least the DJI Mini 3 Pro has a built-in memory of about 1,2 gigabytes. Not much, but you can store some photos and a few short video sequences on it. With the 4K@60fps setting, however, this internal memory only holds about a minute of footage. That's not enough for the front and the back.

The quick recommendation – also from DJI

If you just want to order a memory card quickly, you can simply use the DJI recommendation, which is offered as an accessory when you buy the Mini 3 Pro. This is a 128GB SanDisk Extreme microSD card - but at $29, which is way overpriced.

Exactly this model costs a good 30% less on Amazon – namely just under 20 euros. So if you want a very good and still cheap memory card, I would take this model, which I can recommend with capacities from 128 GB to 1 TB: 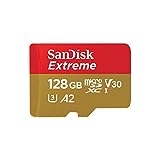 According to the data sheet of the DJI Mini 3 Pro, the drone can only process memory cards up to 512 GB. However, in my experience with DJI drones, that is not the case. I have often inserted larger cards than the recommended ones and so far the drones have always recognized the cards with the full memory capacity.

So I think the 1TB SD card would be ok too, but since DJI doesn't officially recommend it, I'd like to at least point it out to you.

The SanDisk Extreme (U3/V30) comes with an SD card adapter and is actually a microSDXC card and one of DJI's official recommendations.

Are only SanDisk cards recommended?

No, of course you can also use other microSD cards. It is only important that the memory card is fast enough to be able to write the data that the drone sends to the card during high-resolution video recordings.

If the memory card is not fast enough, so-called frame drops occur, whereby individual frames were not written in the film material and the video is actually unusable at this point.

For this reason, you should pay attention to the following properties when selecting the memory card:

One of the two logos should be found on the card, but usually both are printed.

For the sake of completeness, here are links to other memory cards from various manufacturers who also offer SD cards for the DJI Mini 3 Pro:

I hope you were able to use this information to choose a card that suits you. If you have any other information that might be of interest to other readers, please leave a comment.