Serif and the community: Affinity programs + assignments for freelancers 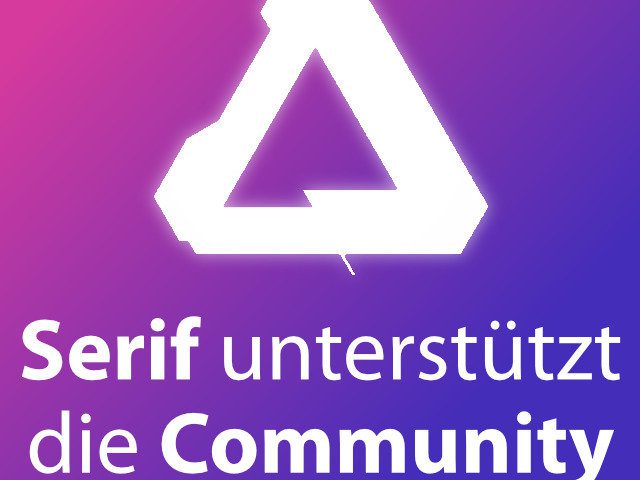 The current need to avoid social contacts (in physical form) brings problems in many areas of the economy. The corona crisis also and above all affects the culture, art and other creative industries. From the concert to the book reading to the photo shoot, everything has to be canceled. The software company Serif, where everyone is currently working from their home office, wants to help in these times. On the one hand, the test period for the Affinity programs will be extended from one to three months. On the other hand, there is a 50% discount on the Affinity apps for Mac, PC and iPad. In addition, freelancers should get jobs. Details on this in the following.

The Affinity developers at Serif are now offering their software for 90 days free of charge and with a 50% discount. Photo, Designer and Publisher are available for less than € 30 each for Mac and PC. In addition, there will be orders for freelance creatives.

Instead of just 30 days, there is now a 90-day test period for the three major Serif programs. So you can either pause other software subscriptions and make do with these offers. Or you now have more time to familiarize yourself with those programs that have been of interest to you for a long time. Personally, I can only recommend this, as the Serif apps are a potent alternative to Adobe programs. For example, Affinity Photo can completely replace Adobe Photoshop in many areas. In addition to Affinity Photo for photo and image processing, Serif also offers Affinity Designer and Affinity Publisher. The trial versions you can secure yourself here.

If you found in your test that the programs, their functions and tools as well as the functionality on your device are exactly what you are looking for, then you can now also access the license versions at a discount. With the current discount of 50%, the prices beat everything you've ever dreamed of from Adobe and Co. In addition, you come into a cost range of programs that are usually much smaller in scope. In other words: If you've always flirted with the Affinity programs Photo, Designer and Publisher, now is the perfect time to to buy them!

Here is an overview of the savings for the single license (single purchase, no subscription!):

In the e-mail recently sent to the community, it says regarding the expected orders that Serif wants to place: "To this end, we will spend the entire budget for commissioned work, which is normally planned for one year, within the next three months.“- This project is currently still in the planning stage. It is not yet known for which areas orders can be awarded and what scope they will have. If you want to stay up to date on these and other developments at Serif, you can also contact Facebook and Twitter drop by.

Serif actually operates from its Nottingham offices. But now the developers of the Affinity programs are working from home. This means that the programs can be further developed, improved and made more extensive. However, the support can suffer. "Unfortunately, we cannot take calls at the moment. Since schools in Great Britain will soon be closed, our support team now has to take care of their large and small children in addition to their 'normal job'“, It says in the very transparent mail. "Take good care of yourself and your loved ones, then this really difficult time will be much easier to get through"Conclude Ashley Hewson (Managing Director) and Gary Bates (Executive Chairman).