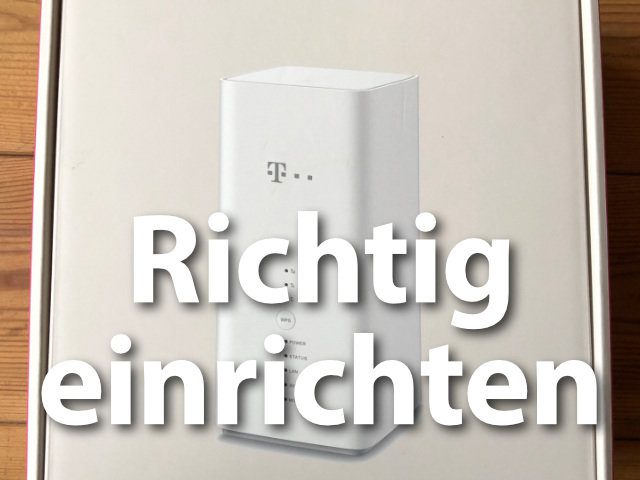 In the following weeks I will give you a series of tests Telekom Speedbox LTE IV make happy. This first part will deal with setting up the cellular router. So if you want to know how to set up the Speedbox LTE IV with a computer or smartphone, how to enter the PIN of the SIM card and where to actually put it in the device, then you've come to the right place. The router, the SIM and the corresponding tariff were kindly made available to me by Telekom. But this does not affect my conclusions of the individual test contributions in any way;)

If you want to set up your Telekom Speedbox LTE IV, you've come to the right place. The following instructions show step by step the procedure on the cellular router, in the browser and when entering the IP, password and PIN of the SIM card.

What is the Telekom Speedbox LTE IV?

The "Speedbox LTE IV" from Deutsche Telekom is a collaboration with the manufacturer Huawei1 offered device of the network operator. It is an Internet router that can supply end devices with the Internet via LAN (Ethernet connection) as well as WLAN (radio connection). However, no DSL, VDSL or cable connection is used, but the LTE cellular network. So if you don't have an Internet connection at home or at work, or don't want to set it up, or if you want a mobile solution for different locations, you can use a cellular router. Ideal for single use at home, in the office, in the workshop, in the garden, when traveling, in a hotel, hostel or Airbnb, etc. (in Germany).

If you have ordered the Telekom Speedbox LTE IV directly from the network operator or bought it from a dealer, and you also have a SIM card ready for the data plan, you can set up the device. The first two steps consist of inserting the SIM card and connecting it to the mains. With the SIM card, it should be noted that a micro-SIM is inserted into the cellular router, i.e. the middle size between the mini-SIM and the nano-SIM commonly used in smartphones today. There is an explanation in this guide: SIM cards - what sizes are there? 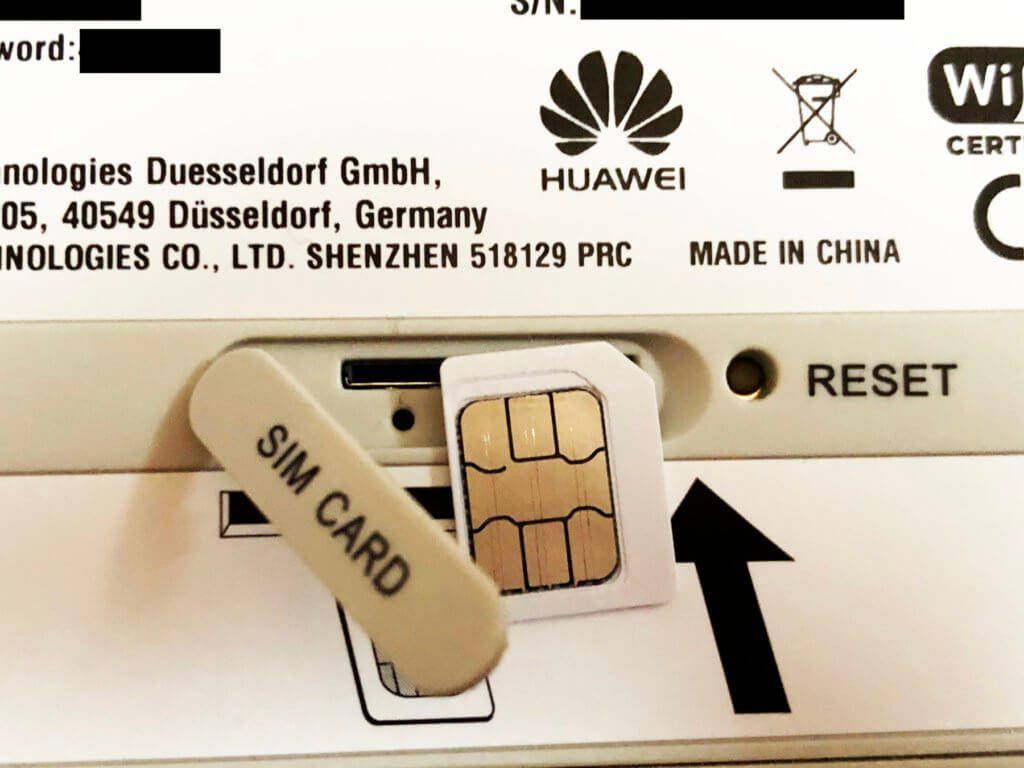 The "Micro-SIM" size SIM card is inserted on the underside.

On the underside of the device, where you also insert the SIM card, there is a sticker with important information. First of all, you should look at the name of the WiFi network that you can use with the router. If you do not use it via LAN (cable connection), you have to select the WLAN network shown on your smartphone, tablet or computer and enter the password that is also on the sticker to dial in. Then you should be successfully connected to the WiFi. 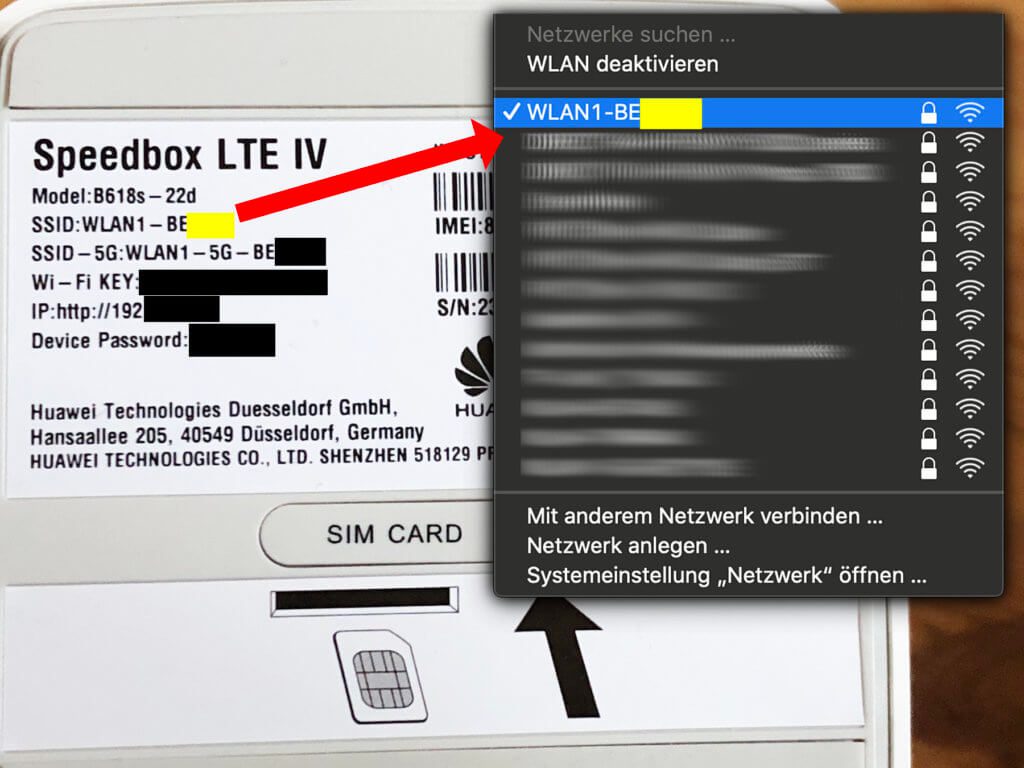 But the setup is not finished yet. As the next step, enter the IP address (groups of numbers separated by dots) also on the bottom of the Telekom Speedbox LTE IV in the address line of a web browser (Safari, Firefox, Chrome, etc.). You get to a page where you have to enter the device password. If this is recognized, you can now access the firmware and enter the PIN of the SIM card. 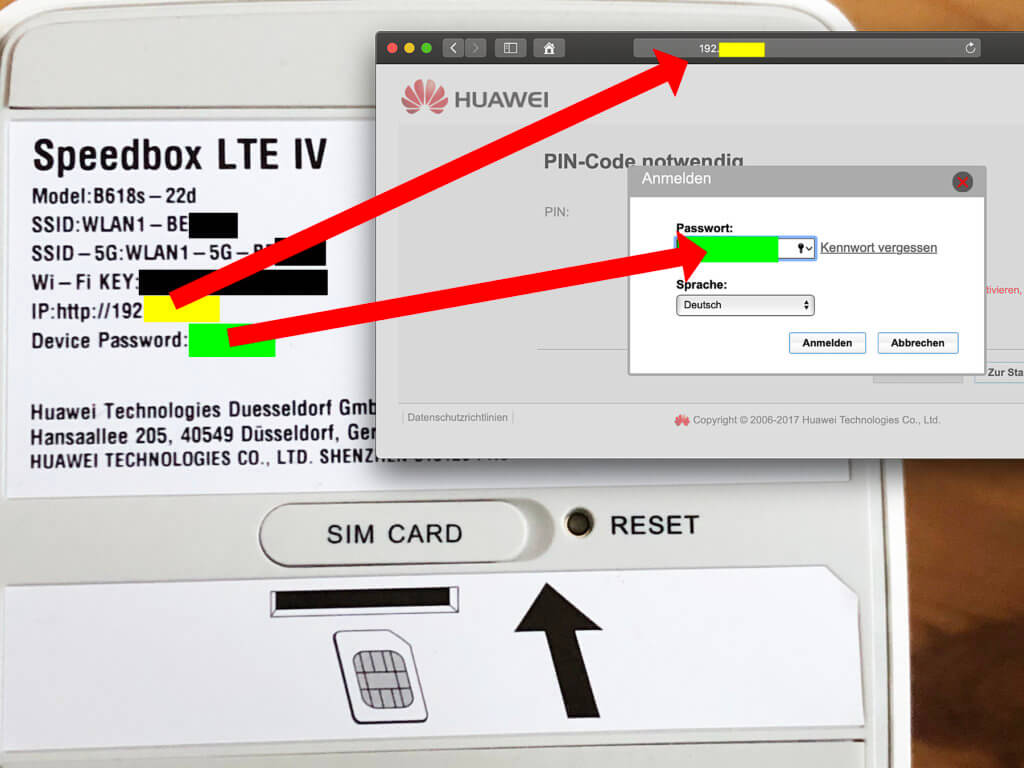 When setting up the Telekom Speedbox LTE IV for the first time, not all LEDs on the front of the device are directly active. What the individual lights mean is well explained in the operating instructions. First of all, it is important that the last LED will probably glow red. This means that the SIM card is either not recognized or not yet activated. You can assume the latter at this point. 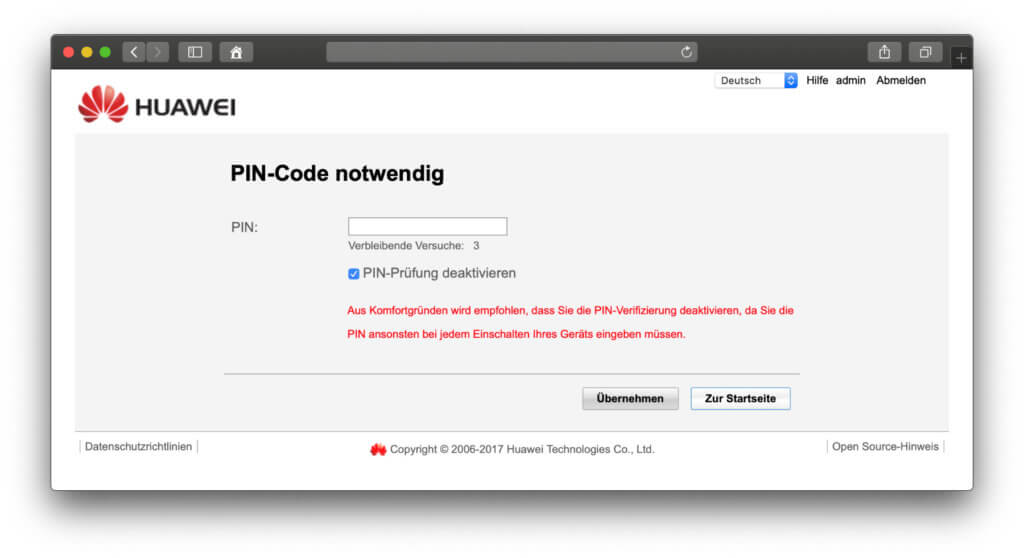 In order to activate the card and thus the data usage via LTE, you have to enter the PIN number of the card on the page described above. That should work without any problems. After dialing into the Telekom mobile network, you also get direct access to the Internet. You will also be asked to set a new password for the device in order to increase its security when using it. 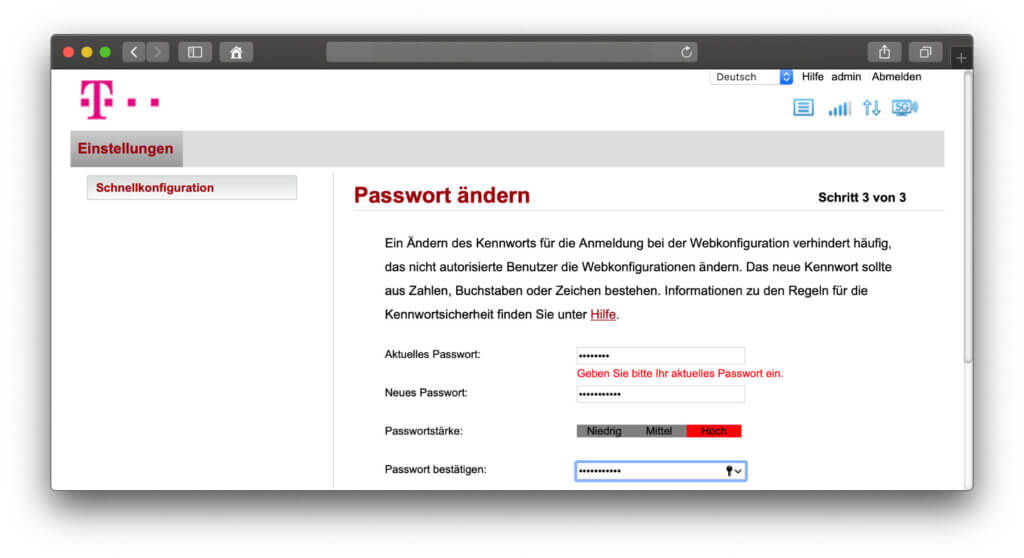 A short WLAN test to get you started

This first Telekom Speedbox LTE IV test is actually only about setting up the LTE router. But of course I also immediately tested whether everything was working smoothly. After the successful setup, I opened three Safari windows, started a Netflix movie in one and a Full HD stream on YouTube each in the other two. The Netflix stream ran while the YouTube windows were always dodging. 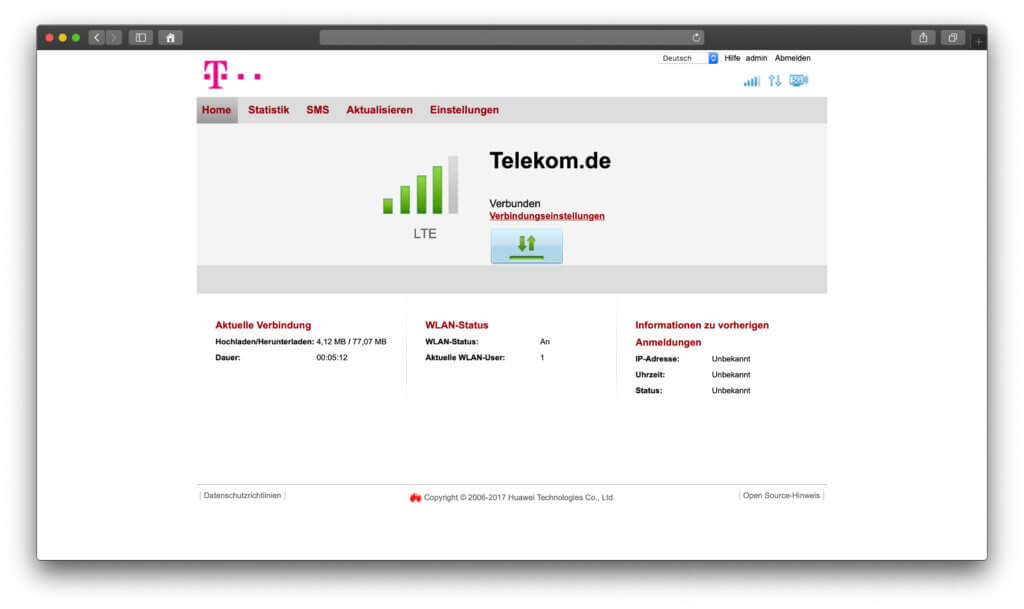 Sometimes LTE was displayed as the signal strength, sometimes the Telekom Speedbox LTE IV also received LTE +. The connection is sufficient for work and also for videos or streams. 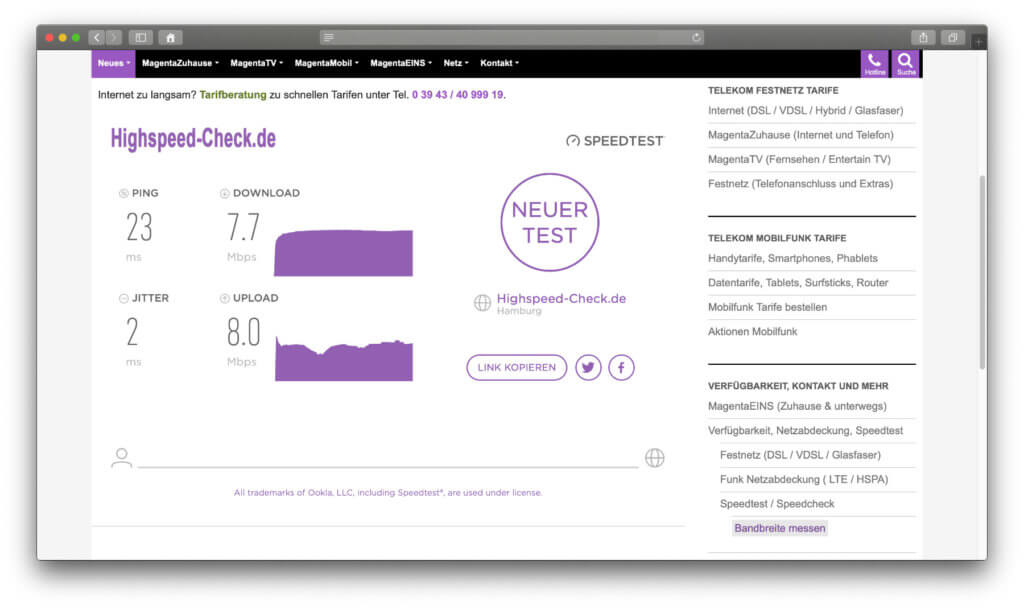 Of course, these values ​​are relative. According to Telekom Network coverage or network expansion map there is full coverage with 4G / LTE as well as with 3G UMTS and HSPA as well as with 2G GSM, GPRS and EDGE at my test location. I don't have the new 5G yet.

After my first little test of the Telekom Speedbox LTE IV, I can say: it works. With all components available (router, SIM, PIN, etc.), the setup was very easy. Only when entering the WLAN password, IP, device password, PIN and the like, you shouldn't get confused: D But if you have managed everything, then it works. Personally, I had to reset the LTE router once. But that's because I (not the first user) have a loan device - a new device password was set by the previous user so that I could only use the standard PW after the reset. This does not happen with a completely new router;)