I bought the first pack of Simbrix a few years ago when my kids were still totally in love with iron-on beads. At that time I had no idea that I would actually be married to Ms. Simbrix at some point, but more on that later. 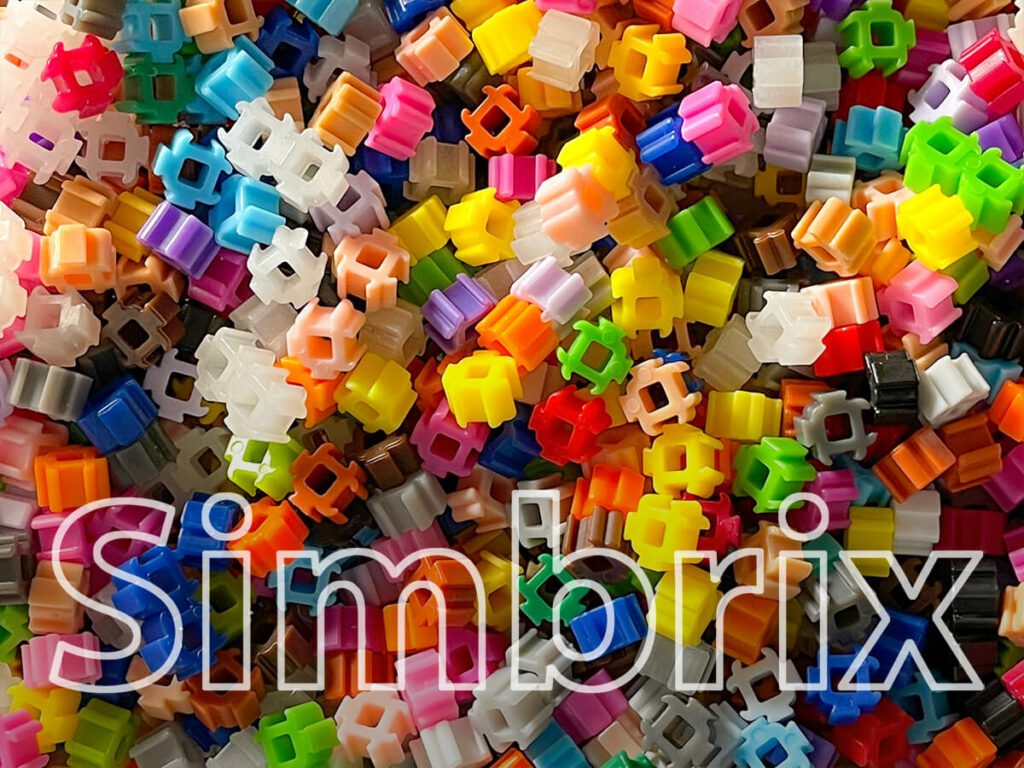 The Simbrix stones can be put together and released again. The creative work with it is much more relaxed than with iron-on beads (photos: Sir Apfelot).

I'll start with ironing beads, because I think most of those who have had anything to do with kids will know that. You put together motifs from iron-on beads on a special plate, which are then ironed after completion so that the iron-on beads melt and thus stick together without having to use glue.

Simbrix is ​​now something like iron beads, but more like “iron beads reloaded”, because these things have many advantages over cylindrical iron beads. The biggest and most noticeable difference is definitely that the Simbrix stones have built in small corners on the sides, which allow the stones to be inserted into each other and also released again. So you have a kind of reusable iron-on bead. 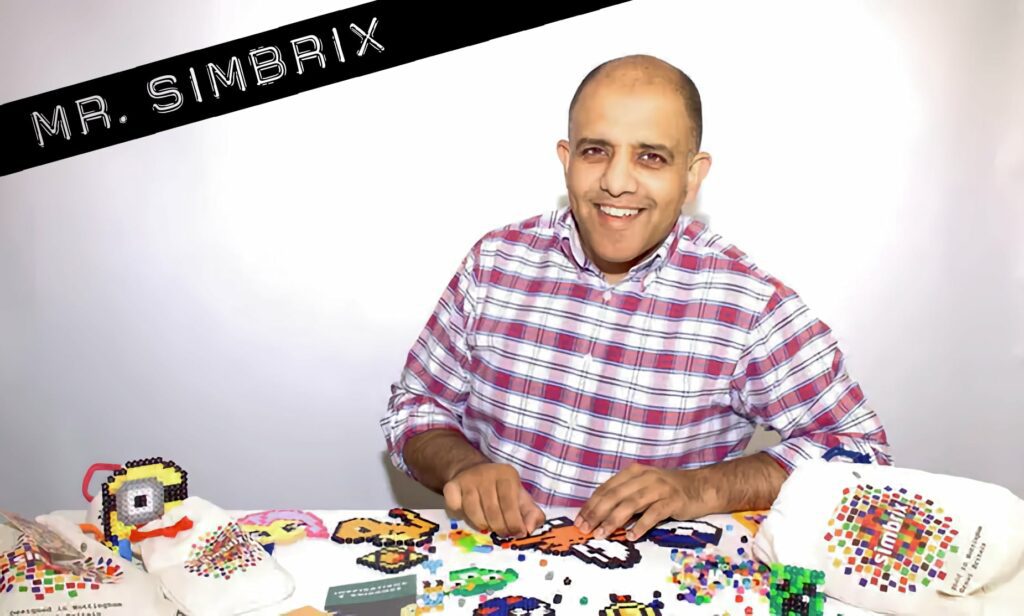 Assim Ishaque is the inventor of Simbrix and goes by the funny nickname "Mr. Simbrix" (Photo: TheGuardian.com).

Assim Ishaque - the Simbrix inventor about his building blocks

If you read about the history of Simbrix, things actually begin quite sadly, because during the development of Simbrix the family man was so short of money that he had problems buying heating oil and food. But he stayed tuned and after 400 prototypes, Assim had the final product in hand. You can also find his story here in the Guardian.

To finance the production of the building blocks, Simbrix was supported by a Kickstarter campaign. The many supporters have already shown that the inventor Assim Ishaque runs open doors with parents.

In fact, all parents who have had iron bead children have the same experiences:

Assim (or "Mr. Simbrix", as he calls himself) had also experienced exactly these situations and wanted to develop a better alternative to ironing beads with his building blocks - which he apparently succeeded in doing.

[…] Mum had gone out to do some grocery shopping - so just me and my babies (5, 8, 9 years old). I bought the ones without the templates as I loved the idea of ​​them being creative, letting their own ideas flow. But a little knock and the peace was shattered. My daughters lovingly made flower design fell apart off the pegboard. I try to calm her and get the beads back in order, but her tears are flowing and I'm getting warmer, anxious and perspiring now.

There are a ton of colors and a good punch of templates in every package. This guarantees hours of activity for the kids (Photos: Sir Apfelot).

I found Simbrix on Amazon years ago when they were promoting former Kickstarter projects that could now be bought as a finished product.

I immediately liked the idea behind Simbrix, because for me it is a mixture of Lego and iron-on beads. The children can work creatively, the building blocks clip into each other and the works of art don't fall apart by themselves. The connection is tight enough that you can play with the finished artwork, but at the same time the material is so flexible that you won't damage the stones even if you just tear them apart or kink the connection. And best of all: As a dad, you don't have to intervene and iron the works of art. The children can just keep doing handicrafts. 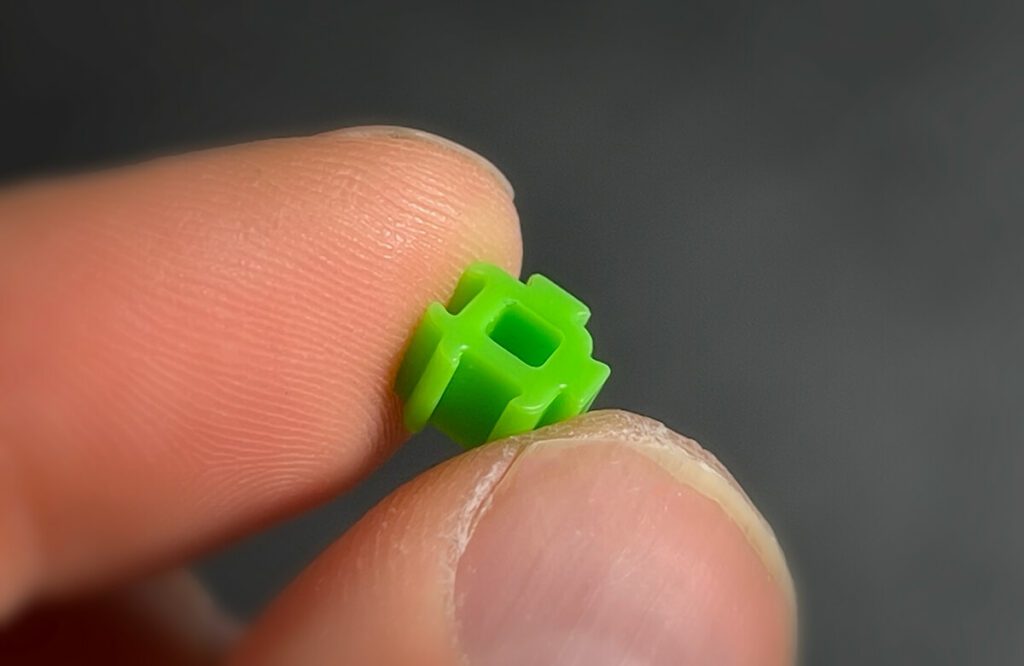 The Simbrix stones are slightly larger than iron beads, but actually not that much bigger, as you can see from the photo.

The only thing that scared me off at the time was the price, because the largest “maker set” costs 59,90 EUR. A decent investment if you are used to iron bead prices. But for me, Simbrix had the advantage that you don't iron the stones and you can use them again and again. So I bought the big set and let the kids loose on it.

After a short time it was clear that I had hit the bull's eye with Simbrix. The children were enthusiastic about the little stones and only had to use the iron-on beads every now and then when they wanted to make a present for grandma or grandpa. While you could practically iron Simbrix artworks, I've never considered doing it - they're just too expensive for that.

It was also out of the question for the children, because for them Simbrix was more like Lego - and no one would ever come up with the idea of ​​gluing Lego buildings. I only remember the evil "Kragle" from Lego Movie 1. ;-) 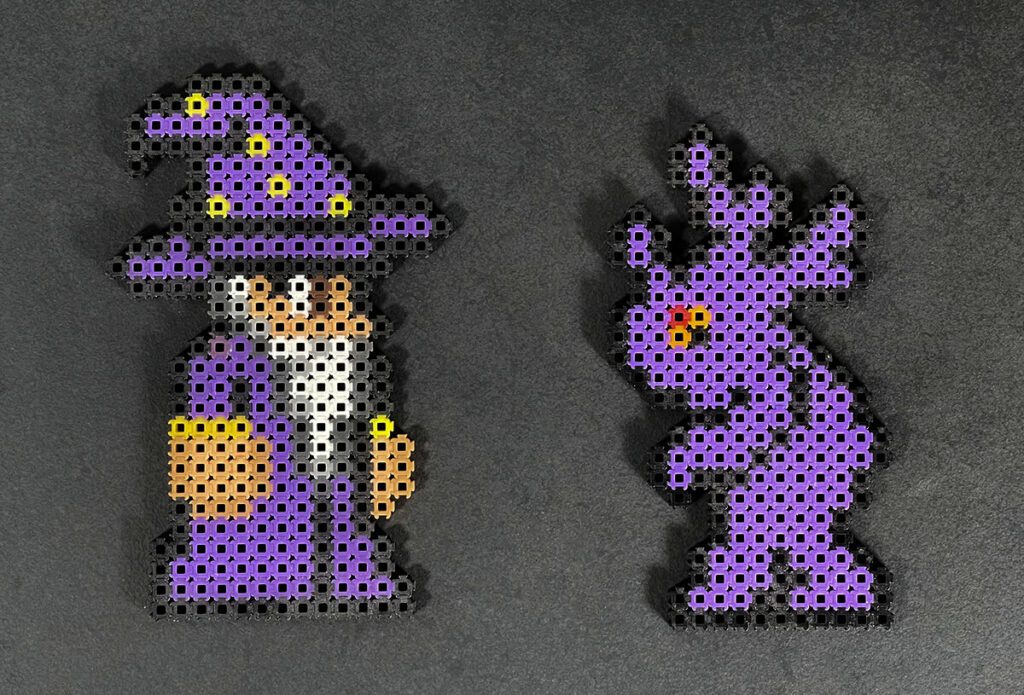 My son is an avid Terraria player and has selected and recreated a number of figures from the Internet - practically recreated every pixel in a Simbrix component.

The advantages and disadvantages of Simbrix compared to iron-on beads

Before I give you a brief overview of what my family thinks better about Simbrix than about iron-on beads, I would like to briefly mention the "disadvantages":

Simbrix stones are more expensive per stone than iron beads

For comparison: If you calculate the costs per stone, you get about 0,5 cents per Simbrix stone for the sets without accessories (with only stones). If, on the other hand, I buy a can with 30.000 iron-on beads, I end up with a little more than 0,1 cents. So Simbrix is ​​more expensive "per piece".

You don't make anything for "eternity"

As already mentioned, the Simbrix stones are not permanently connected. For this reason they are reusable, but at the same time you have the small disadvantage that you don't make anything that you would give as a gift or that ends up as permanent decoration for grandma and grandpa.

Personally, however, I also see this as an advantage, because there is no plastic waste - which is what iron-on bead works of art are, the bottom line is. How many of these things have I thrown away because the children no longer wanted them, because they didn't stick together properly or they broke at some point. 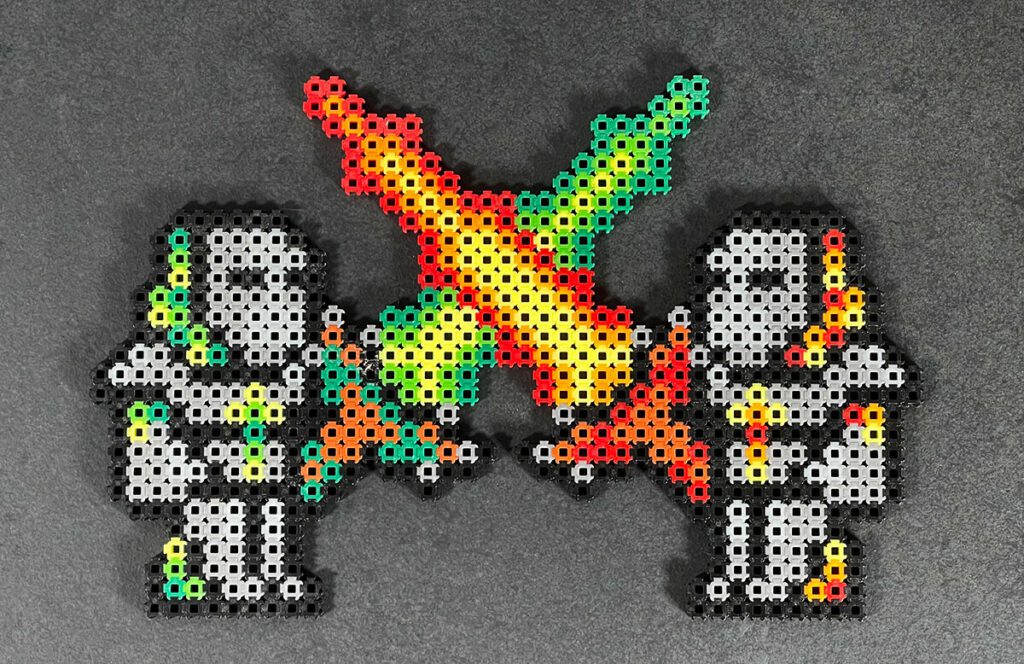 This is also a motif from Terraria - but at first it only consisted of one fighter and after a few days my son had the idea of ​​making a second one. Something that is completely impossible with iron on beads.

But here's about the good things about Simbrix: 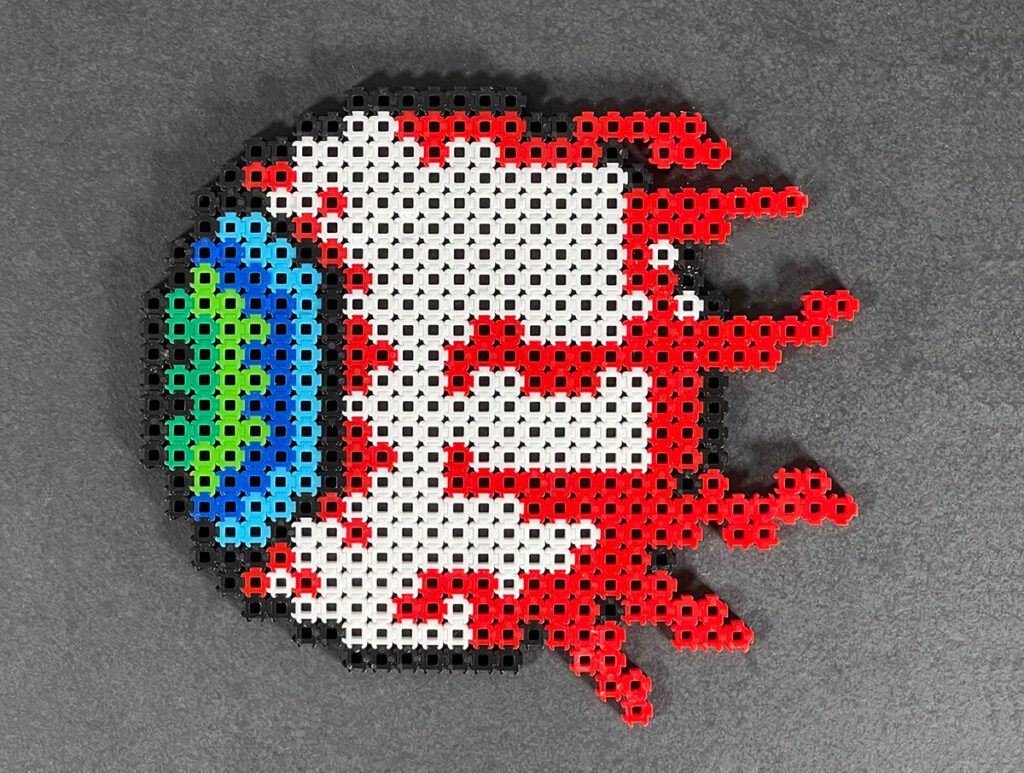 "The Eye of Cthulhu" is a senior boss in Terraria who is relatively easy to defeat. It takes some time to recreate it in Simbrix, but then you have great "pixel art".

You can see that the little stones have a lot to offer. For that reason I did a little more for the inventor, because Simbrix was - except for a short time when the Kickstarter projects Amazon.de Introduced - available through the UK shop only.

I was surprised because I found the product very interesting. So I just wrote to the inventor and asked if he was still looking for someone to sell Simbrix in Germany.

The answer came quickly and the first Zoom meeting with Assim was underway. In the course of this it came out that Assim would be very happy if we would take over the sales.

May I introduce: Ms. Simbrix

Without further ado, became my wife Lynne appointed "Frau Simbrix" and takes care of the sales of Simbrix in Germany from now on. We are happy that we are able to market Simbrix in collaboration with Assim Ishaque, because the product is really a toy that deserves more awareness. For this reason, it finally made the jump from the children's room to my blog.

How do I get Simbrix now?

The online shop and the sale on Amazon is currently not finished. We are a bit taken by surprise at how fast it went now. Normally I would have waited until everything was online with the article, but I think Simbrix can still make some children happy at Christmas who have always had to deal with ironing beads, if I wanted to before Christmas - as a last-minute gift recommendation, so to speak - write an article about Simbrix.

If you think Simbrix could be something for your kids, grandchildren or friends, then feel free to contact me.

We will now be offering these three different kits from Simbrix in Germany: the Maker, Crafter and Geek Kit.

Which Simbrix sets are there?

We currently have three sets here that we can ship. For each set I will briefly write you what is in it and what it costs:

The maker kit consists of a storage box, 4000 stones in 20 colors and a deck of cards with templates. It is the largest set and costs EUR 59,90 (+ EUR 5 shipping in Germany). 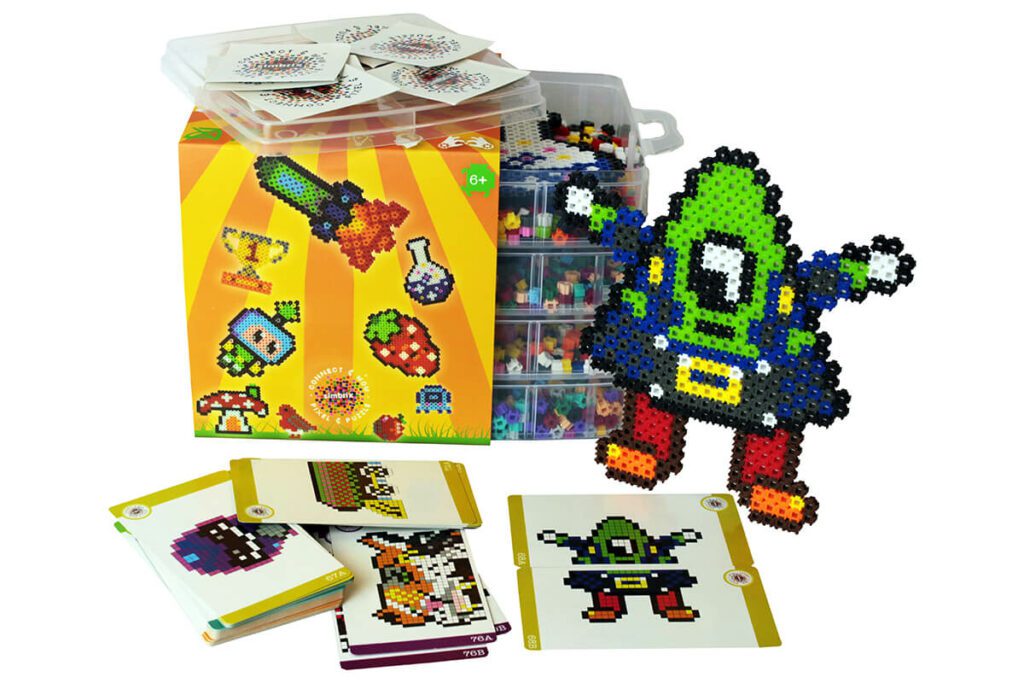 I would recommend the maker kit if you have two kids or want to have childcare. With 4000 Simbrix stones and 20 colors you can let your creativity run free.

The Crafter-Kit also consists of a storage box, 3000 stones in 20 colors and also comes with a deck of cards with templates. It costs 45,90 EUR (+5 EUR shipping in Germany). 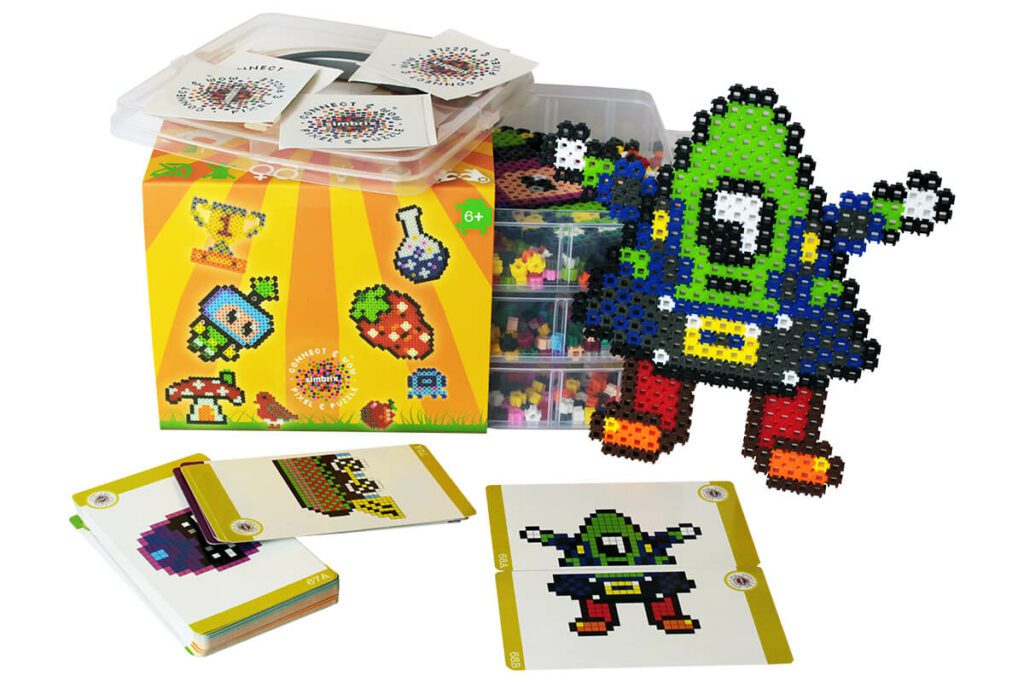 With a good 3000 Simbrix stones, a storage box and a lot of templates, the Crafter kit has enough materials to be able to tinker many motifs.

The geek kit comes with 2000 stones in 20 different colors, a storage box and the aforementioned card deck with templates. The geek kit costs EUR 34,90 (+ EUR 5 shipping in Germany). 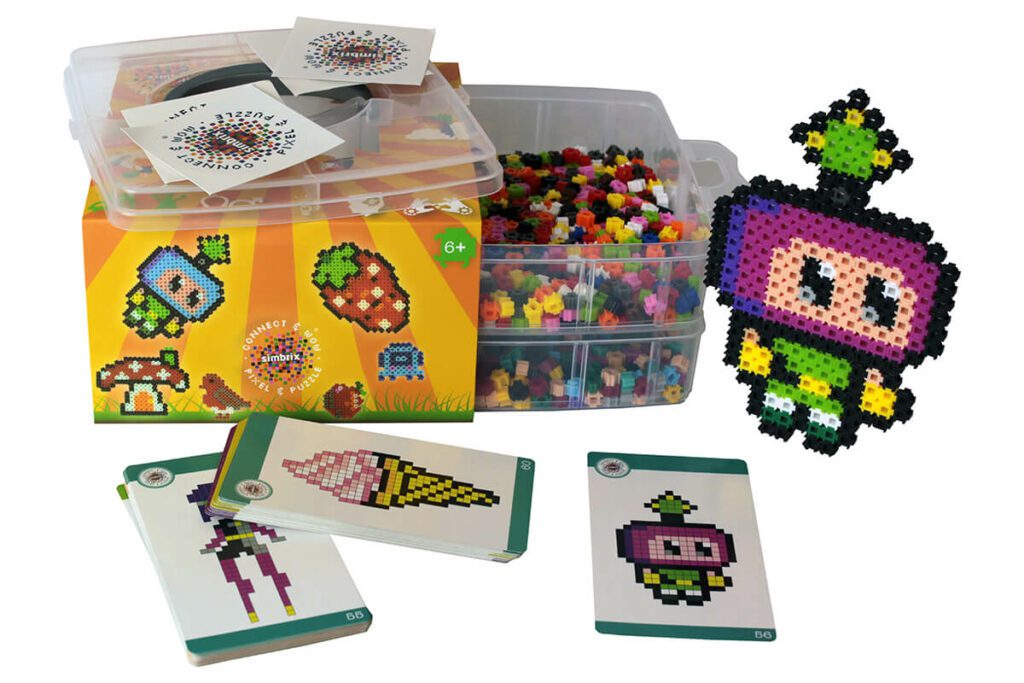 Here you can see everything that is included in the Geek Kit: 2000 stones, a practical storage box and cards with templates.

Since the family reunions on Christmas Eve have to be canceled due to the lockdown, it is of course difficult to bring gifts. For this reason we would like to offer you a gift service. For a surcharge of 5 euros, we'll wrap the Simbrix pack in wrapping paper and add a Christmas card with a greeting message of your choice. We will then send the whole thing to the recipient of your choice.

Please contact usif you want to order something. We send as quickly as possible so that the orders reach your loved ones (or you) before Christmas.

Self-promotion on the blog

As a rule, I mark all promotional posts in the blog with a transparency notice at the beginning of the article. Unfortunately this would have spoiled the part with our "Miss Simbrix" in this case. I hope you will excuse that this time, for once, I only refer to the advertisement at the end.