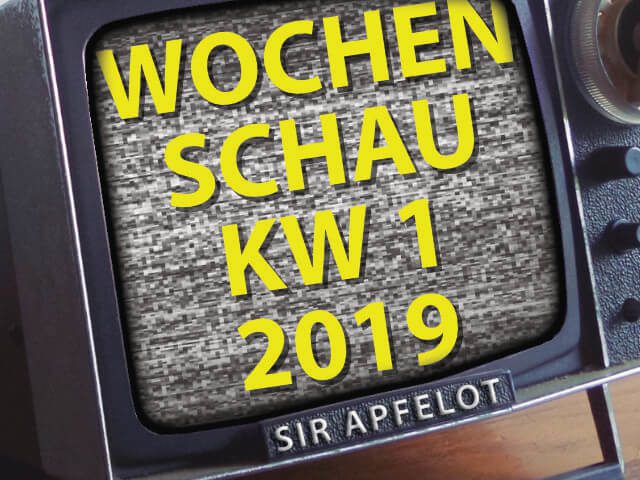 I wish all readers of Sir-Apfelot.de! So that you start well-informed in the next 52 weeks, there will of course be a weekly newsreel again this Friday. In this I present you the Apple and tech news that I noticed particularly in week 1. The following topics are included: Outlook on CES 2019, politicians and celebrities affected by data leak, a foldable smartphone from Xiaomi (?), Negative Apple analyzes, iPhone sales stop in Germany due to Qualcomm lawsuit and much more. 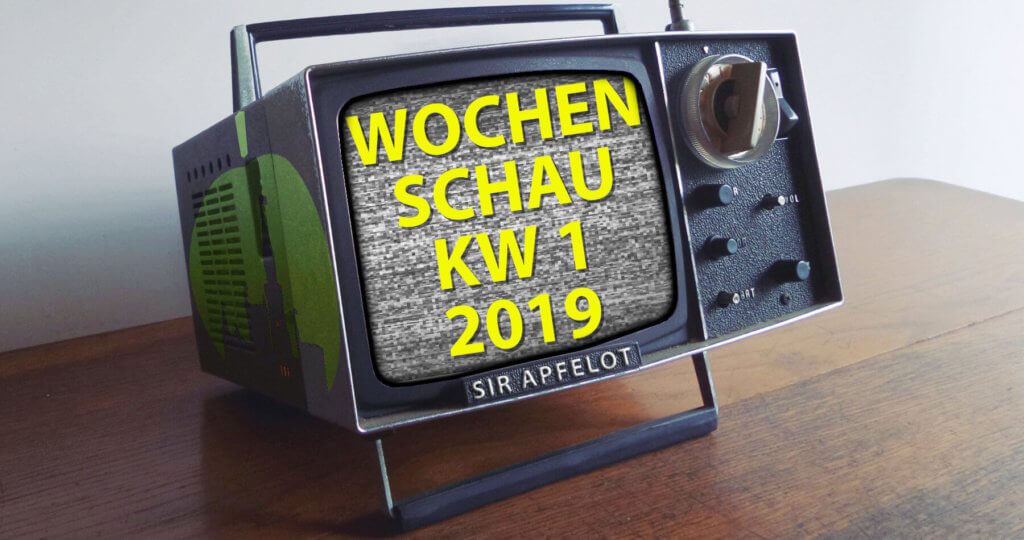 How innovative will the Consumer Electronics Show be in 2019?

At CES 2019, many new products and innovations from the world of electronics and consumer technology will once again be bustling around. Futurezone gives an outlook on what we can expect from January 8th to January 12th, 2019 in Las Vegas in this post. With regard to smartphones, hopes are placed in the first marketable prototypes of foldable models. More sophisticated solutions for the smart home are also expected. In addition, there are large (or wide) screens and correspondingly powerful processors or GPUs from AMD, Intel and Nvidia. Innovations relating to wireless Internet are to be shown under the names “Wi-Fi 6” and “WLAN-ax”. And VR, AR, drones and headphones should also come with new sales arguments.

Like iFun here and Futurezone here report, personal data such as addresses and telephone numbers of some well-known personalities in Germany have been published on the Internet. Among other things, there were already insights into the collection distributed on Twitter throughout December 2018, which includes data from politicians, celebrities, YouTube personalities and so on. According to iFun, the Attorney General and the National Cyber ​​Defense Center are on the matter. Futurezone already focuses on an interesting fact in the title of the article: "Hundreds of German politicians fall victim to hacking attacks - only the AfD is missing".

Among other things, the iPhone ticker shared a video posted on Twitter by user Evan Blass (@evleaks) veröffentlicht has been. You can see a Chinese device in it, the display of which can be folded in two places. While it works like a tablet when it is unfolded, with the two sides folded back it functions as a smartphone using the remaining middle section. The Android or MIUI adaptation required for such a device also seems to be available according to the video: As soon as a display side is folded back, the display is rebuilt so that there is no loss of information and the system and apps are ideally placed on the facing side are displayed.

This question is among other things at this point Provided by MacRumors. In addition to the inevitable new iPhone models, the speculative contribution also includes AirPower chargers, updates for Apple TV, the related Apple streaming service, new AirPods (with health features as USP), innovations for the HomePod, new elements for the Mac Pro or iMac Pro and basically all other devices. There are also rumors about the iPhone SE 2, which may also be coming, as well as the OS updates for iOS 13, macOS 10.15 and so on. Smart glasses with augmented reality (AR glasses) are also mentioned in a paragraph as an option for the Apple product range in 2019.

Several analysts have Sea 9to5Mac has revised its sales forecasts for current iPhone models downwards. Last but not least, the reduced productions on the part of Apple show in fact that the demand for iPhone Xs and iPhone Xs Max is less than expected. The iPhone XR could also sell worse than Apple would like. The linked article contains exact figures and forecasts. In addition, there are links to similarly informative articles.

Netflix is ​​not affordable for new customers via iTunes

Anyone who pays their Netflix subscription continuously via iTunes can still do so in the future. However, if you are a new customer or are returning to Netflix, you no longer have the opportunity to do so. Among other things, this reports app dangers in one Post . The possibility of paying for the Netflix subscription via the App Store is associated with a great advantage: Those who use promotional credits for the App Store / iTunes can effectively secure the streaming service for a lower price. For those who have not yet accessed, there are still payment methods via PayPal, direct debit, credit card or gift cards. So if you want Netflix vouchers for your birthday, Easter, Christmas, etc., you can also get cheaper films, series and documentaries.

GarageBand: 15 years of making music on the Mac

Next Sunday, Apple's “GarageBand” music app will celebrate its 15th birthday. With the program for macOS released on January 6, 2004, private, semi-professional and professional users can not only record instruments and vocals, but also edit, mix and master the corresponding tracks. There is also the option of inserting loops, playing in software instruments using the keyboard or keyboard, and so on. Among other things, iFun has the GarageBand anniversary one Post dedicated, in which you can also watch the first-time presentation of the app by Steve Jobs and musician John Mayer as a video. App risks, however, shows in a list the milestones of the software and its development from 2004 to today.

An ongoing legal battle between Apple and Qualcomm, which is about alleged patent disregard, has now also led to further sales bans in Germany. After the iPhone X was removed from the local Apple range, the models 7 and 8 are now also affected. The current versions from 2018 do not use the technology that is the focus of the dispute, so they are still in the official offer. While the models shown are no longer available from Apple, they are still sold by third-party providers and network operators. Background information on the topic and further information is available among other things here with the iPhone ticker.