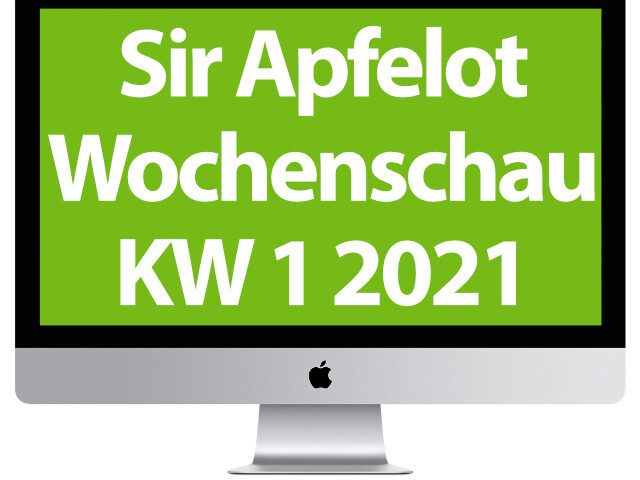 The Sir Apfelot Wochenschau is in its fourth year, and of course it starts this time with calendar week 1. If you want to know which Apple and tech news caught my eye in the first week of the new year 2021, then you are here correct. Among other things, the following topics are included: E-mobility on rails and roads, new WhatsApp terms and conditions with important content, study on video games with violent content, digital education, Apple's AR glasses, M1 MacBooks with 14 and 16 inches, Nintendo amusement park and more.

In the Sir Apfelot Wochenschau of calendar week 1 in 2021 you will find the following topics: e-mobility, new WhatsApp terms and conditions, study on video games with violent content, digital education, Apple's AR glasses, M1 MacBooks with 14 and 16 inches, Nintendo amusement park and more.

According to one, it should be in this decade Entry from Golem are ready: South Korea wants to replace the diesel trains that are still in use with those with electricity. In addition to higher speeds, there is also the promise of more climate-friendly travel in nationwide rail transport. The plans to replace the fleet by 2029 were announced as part of the commissioning of a new high-speed train on January 5, 2021. "The train should run at speeds of up to 260 km / h and is therefore comparable to the current ICE 4 in Germany“, It says in the linked source.

Norway has over 50% new electric vehicles

Also with Golem is a Post noticed about new cars in Norway. In 2020, more than half of the new cars registered are said to have been fully electric. As a pure combustor of fossil fuel, "only every sixth new car". In 2019, the share of all-electric cars among Norwegian new registrations was already high: a full 42,4 percent. In the following year, however, the proportion increased to 54,3 percent, it is said. In this context, it is of course interesting that there is state subsidy for the purchase of electric vehicles in Norway. You can find more details, numbers and comparisons using the link above.

If you didn't want a Facebook profile to keep private data off the platform, you could still use WhatsApp relatively carefree. Because so far there has been no exchange of data between the two Facebook offers. But that should change now. With the new general terms and conditions (GTC), the wedding of the various platforms and apps is to be celebrated on February 8, 2021. Then the Zuckerberg Group could also offer cross-platform chats between Facebook, Instagram and WhatsApp. If you want to switch to a WhatsApp alternative, you have a month. more details here at t3n.

5G chip in vaccination? It's a guitar amp!

In circles of conspiracy ideologues, false reports and disinformation occur every day. And not just because official information is misunderstood. Incorrect information and forged documents or graphics are also scattered in a very targeted manner. One of them shows a circuit that is supposed to show the structure of the 5G chip in the corona vaccination. At heise online you can find one Post referring to the Search von Mimikama the resolution to the bad joke: "Indeed [...] handelt [it] is simply about the plan of the Boss Metal Zone MT-11 floor kicker, a popular and often copied effects device for guitarists, which has been circulating in the community for 2 years."

Observed over 10 years: Children do not become aggressive through games

Do games like Grand Theft Auto (GTA) make violent game elements and corresponding representations aggressive? Does the depiction of violence carry over to the character of the players, especially when they are young? No. At least this is denied by a current study on the GIGA at this point comes in. In the study with a mixed group of subjects, people who played GTA 2007 were examined from 5 onwards. Some were only ten years old when the investigation started. The level of aggression did not increase over time, neither in the subjects with a low nor with a high degree of violence. Perhaps this study can finally end the pointless "killer game" discussion.

Like t3n in one Post shows, the digital association Bitkom demands that Germany "establish a legal right to digital teaching" should. Reference is made to an official one press release of January 5, 2021. Bitkom President Achim Berg finds clear and nothing euphemistic words in the direction of responsible politics: "Germany’s education politicians have probably never caused such disappointment and alienation - among schoolchildren, parents and teachers, but also in business and society. Their proposals are too unambitious and too old-fashioned, their decisions are too erratic, and their communication is too chaotic [...] "- In all school types, a"Legal entitlement to digital teaching" required.

Apple AR glasses: Augmented Reality should come by 2023 at the latest

I noticed two reports about Apple's AR glasses this week. The first comes from t3n, and rumor has it that the first model could hit the market as early as this year. Opposed to this is the zweite Report from iTopNews that prototype tests are still in progress and that the weight of the glasses will be reduced and the battery life increased in a further development phase, which will take months. Let's see who is right. The first post will at least focus on the reliable analyst Ming-Chi Kuo Referenced; in the second to the well-informed Mark Gurman.

In the second half of the year: MacBook Pro with M1 and 14- or 16-inch display

Another is considered relatively safe Entry to new Apple hardware in the foreseeable future. At MacRumors (see link) the rumor was picked up again this week that two new MacBook Pro models should come onto the market in the second half of 2021. The smaller one should have a display with a 14 inch diagonal, the larger one with 16 inches. It is also mentioned that Ming-Chi Kuo announced this in July 2020. Both models should not have an Intel chip, but an Apple Silicon. Whether it will be the already well-known M1 or a further development is still to be seen. Mini-LEDs should be used in the display.

After a few delays, the “Super Nintendo World” theme park in Japan is set to open its doors to visitors on February 4, 2021. The design and the attractions are primarily based on the virtual world around “Super Mario”. Different areas also invite you to get to know the worlds of the individual characters such as Bowser, Yoshi, Princess Peach and Co. The Universal Studios Park with the Nintendo appearance can also be viewed without a flight and under current regulations on contact restrictions. You can find pictures and information on the official website: Click here. The park is also presented extensively in this Nintendo Direct: