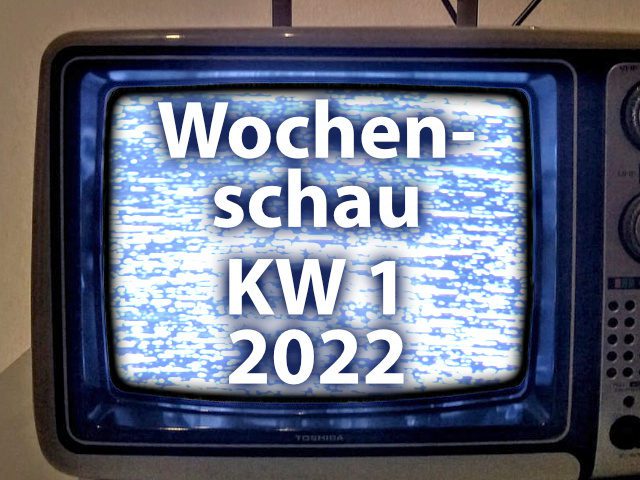 Welcome to the first Sir Apfelot newsreel in the new year 2022. In the old fashion, I will show you today which Apple and tech news I noticed particularly in calendar week 1 of this year. Among other things, the following topics are included: Off for old Blackberry smartphones, accumulation of sexualised Internet violence, Google wants to enable cross-device functions, rumors about new Apple products, the importance of restarting the iPhone against malware and more. Do you have another addition? Then please leave a comment.

Included in the Sir Apfelot Wochenschau for calendar week 1 in 2022: Off for old Blackberry smartphones, Rembrandt paintings with 717 gigapixels, accumulation of sexualised Internet violence, Google wants to enable cross-device functions, rumors about new Apple products, ARTE with SharePlay and more.

The end of classic Blackberry smartphones

Before the iPhone set new standards with its touch display, the Blackberry was one of the most popular smartphones. Over time, the cell phone equipped with a complete mini keyboard lost its importance and market share. The classic models from back then are also currently being made unusable. Because as of January 4, 2022, various functions in BlackBerry OS were switched off, such as phone calls, SMS, use of mobile data and emergency calls - basically everything that you actually want to be able to do with a smartphone in addition to using the app. There are details on the topic in one Post by MacRumors.

If you like to take a detour into the world of art, then I recommend you not only this DailyArt App for the iPhonebut also a current one Articles of the monopoly magazine. It deals with a new, extremely high-resolution photograph of "The Night Watch". It is the most detailed digital representation of a painting to date and consists of a total of 8.430 individual photos. Brush strokes, the finest hairline cracks in the paint and even pigments should now be visible; The whole thing is intended primarily for art historians and restorers. The photo was taken in preparation for the restoration of the Night Watch, due to begin on January 19, 2022.

"During the pandemic, various forms of digital gender-based violence increased again, warns the Association for Women's Advice Centers“, It says in an introductory way Post from heise online. Problems like deepfakes, stalking and harassment are discussed below. With the pandemic, these are said to have increased, which is evident in the corresponding reports to helpers. Not only does this show that it is still far too easy to use violence against others online and make their lives worse. But also that law enforcement authorities need appropriately trained units to locate the senders and bring them to justice.

Google is planning an Apple-like communication between platforms

AirDrop, SharePlay and other tools for networking different Apple devices ensure that iPhone, Mac, Apple TV, iPad, Apple Watch, AirPods and Co. work so well together. Taking a photo or screenshot on the iPhone, sending the image to the MacBook via AirDrop and editing it there – that’s part of my everyday work, for example. Now Google wants to follow suit with its own solution to network Android and Chrome OS accordingly. The "Quick Setup" was presented at CES 2022, with which Chrome tabs, chat messages, files (via "Nearby Share") and more can be exchanged. According to one Entry go live at 9to5Google later in 2022.

The next WWDC will probably be in store for us in June and there will be new iPhones in September. Before, after and in between there may also be new devices and systems from Apple. Accordingly, there are currently many rumors and reports from the production chain about the Apple innovations in 2022. For example, the iPhone 14 should no longer have a notch, but a punchhole camera. MacRumors reports on this here . The same source deals with a MacBook Air with an M2 chip, an iPad Pro with wireless charging, and a Mac Pro with Apple Silicon and up to 40-core CPUs and 128-core GPUs. It's all about the matching monitor at half the price of the current Pro Display XDR here .

In einem Post Macerkopf is already talking about the iPhone for 2023, especially the corresponding Pro version. Because this should have a camera with 10x optical zoom. The iPhone 12 Pro offers 2x optical zoom and the iPhone 13 Pro provides 3x zoom without digital assistance. What intermediate step there will be this year with the iPhone 14 Pro is still pending. But we should know more by September at the latest.

Get rid of malware thanks to reboot - if this is possible

Reports about malware, especially about the espionage software “Pegasus”, have raised doubts about the security of Apple's iPhone in recent months and years. Ordinary users hardly have to worry about surveillance and similarly powerful malware, but knowing about the topic cannot do any harm. For example, it has always been emphasized that restarting the device eliminates malware. How now but heise online in one Post shows, there is already malware for the Apple smartphone that prevents a restart or only fakes it. The crux of the matter: A check, for example using a physical off switch or removing the battery, is not possible. It takes more technical effort.

ARTE offers various beautiful streaming content from documentaries to concerts in its in-house media library. If you want to enjoy this together with others, but these others are not on site, then you can now use SharePlay to synchronize the playback. This means that watching ARTE content together and exchanging information via FaceTime at the same time is even easier than before - at least if you are using Apple devices with the latest operating systems. IFun offers details on the topic in one Articles.