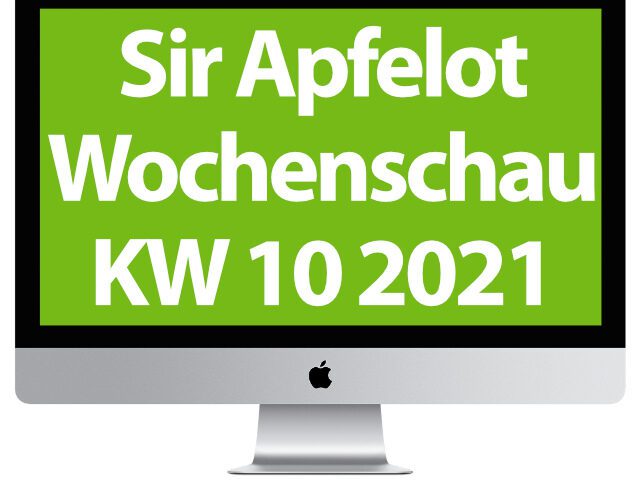 Have you already waited for Friday to read a new edition of the Sir Apfelot newsreel? Here it is, filled with the Apple and tech news that caught my eye in calendar week 10 of 2021. Among other things, these messages are included: Extrajudicial body for copyright disputes, hacked surveillance cameras in critical locations, polymer cables as a fiber optic replacement, iCloud problems with the name “True”, new press releases from Apple, random serial numbers for Apple products, mixed reality -Headset, and more.

"Extrajudicial bans: Copyright clearinghouse starts work“Is the headline of iFun in a current issue Entry. According to this, the clearing house, which is made up of the rights holders and the Internet providers, should be able to independently decide whether a website that offers series for example,structurally infringing websites“Is to count. If this happens, the Federal Network Agency must check whether blocking the site will cause problems with the EU neutrality regulation. If this is not the case, the page can be blocked. A court judgment is then no longer necessary. The blocking is carried out by DNS entries, which means that they can be circumnavigated by VPN services, for example.

"150.000 surveillance cameras provided unauthorized persons with pictures, including from prisons and hospitals. Even extensive video archives were open", is it [called at this point at heise online. All cameras are said to come from the Canadian start-up company Verkada. The "Password of a super administrator access“The hackers want to have gotten from the internet. In addition to the bodies already named, the IT security company Cloudfare Verkada is said to have used cameras and been hacked. Initial information on the case was provided in a comprehensive report by Bloomberg (here in English).

Polymer: Fast and easy cables as a fiber optic replacement

Since an episode of “ZDF Magazin Royale” with Jan Böhmermann (see below), the topic of broadband expansion with fiber optics has been on everyone's lips again. Telekom also has to take criticism because it sticks to copper cables and vectoring in many places. One fits that Entry from Golem with the heading "Polymer cables are twice as fast as Thunderbolt 4". It describes polymer-based cables that are designed to combine the simplicity of copper cables with the data speed of fiber optics. During research at the Massachusetts Institute of Technology, cables with 105 GBit / s are said to have been developed. One advantage over glass fiber: no expensive signal converters are required for use with polymers.

Sonos now also in the car - the first partner is Audi

The manufacturer Sonos is actually known for its sound systems for the home. Now he also wants to get involved in the equipment of cars. This is shown by the t3n magazine in one Entry on. It describes that the cooperation between Audi and Sonos was made public with photos showing the interior of the Audi Q4 E-Tron. Later, Sonos confirmed the collaboration. "Sonos is fairly late with its entry into the car speaker market“, It says. There is tough competition, especially with the Samsung subsidiary named Harman Kardon. This mixes with BMW, Volvo, VW, Alfa Romeo, Maserati, Mini and KIA.

The display of entire photos in the timeline is now to be tested in the Twitter app on both iOS and Android. This does not only apply to landscape or landscape shots, but above all to portrait and vertical format photos. As an example, the Twitter support shows in his Announcement tweet a photo showing a dog in a boat and above the horizon with forests reflected in the water. Only water, sky and forests are shown cropped. The complete display also shows the boat and dog. Whether this is a reaction on Twitter to the racism allegations (faces of whites are preferred when cropping pictures) is not clear.

True or false? Some last names have a hard time in iCloud

Anyone who knows a little about programming languages ​​knows that there are the values ​​“true” and “false”. These indicate the presence or absence of a particular input / output. If, for example, text fields for names are incorrectly programmed, entering the English surname True can lead to an error message, since the entry is interpreted as an attempt to change a value. And that's exactly one Entry happened from Golem to Apple's iCloud: "Due to a programming error, US actress Rachel True was unable to log into Apple's iCloud for six months.“- Rachel True made the case with this tweet public.

As noted a few times, it is worth taking a look from time to time Apple Newsroom, that is, the digital display of Apple's press releases. There you will find these three new messages from Cupertino this week:

iPhone 12 mini is much less popular than expected

Apple's orders for the iPhone 20 mini from the manufacturing companies are said to have decreased by around 12%, berichtet MacRumors relating to Nikkei Asia. Accordingly, the demand for the smallest model of the 2020 smartphones is "much less than Apple originally assumed“(Freely translated). Some suppliers are even said to have been encouraged to temporarily stop the production of parts for the 5,4-inch device. The total demand for parts for smartphone sales in the first half of 2021 also fell from up to 96 million devices to around 75 million. Despite everything, Apple wants to hold onto the iPhone 2021 mini for 13, reads the MacRumors report.

To make fraud more difficult, Apple devices are to have randomized serial numbers in the future. The procedure has been planned for a long time, but has since been postponed. Now, in the spring of 2021, the first Apple devices with the random serial should come onto the market, as in one Entry from heise is online. "Apple could introduce products that no longer have a traceable serial number for the first time in the coming weeks", It is there. In the case of an iPhone or other devices with mobile communications, however, unique identification is still possible, as an IMEI (International Mobile Equipment Identity) is used in addition to the serial number.

Technical data and timetable for VR / AR hardware from Apple?

MacRumors has again a few statements from the Apple analyst Ming-Chi Kuo collected. A presumed roadmap for Apple's VR and AR products emerges from these. But technical details are also shown there. The VR-AR headset (or mixed reality headset) should have 15 camera modules. Eight of the 15 cameras are supposed to ensure that the virtual reality (only simulated content) becomes an augmented reality (mixture of real environment and virtual content), because they transmit the environment to the internal displays. Current prototypes should weigh 200 to 300 g; the finished product should weigh only 100 to 200 g. The headset is expected in mid-2022. Apple glasses will be available in 2025 and smart contact lenses in the 2030s. Source 1 / Source 2.