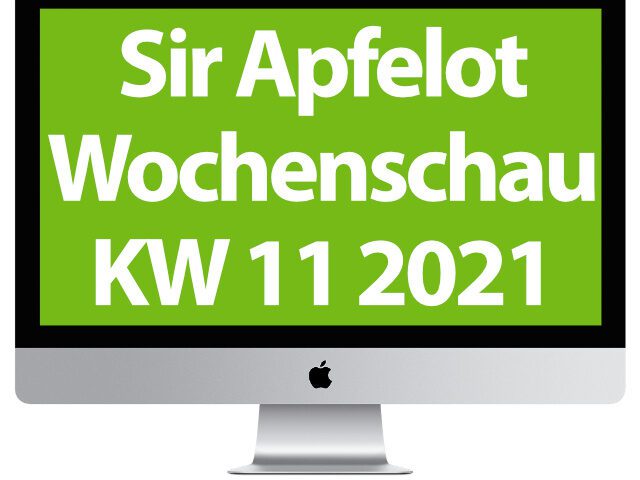 This Friday there are again interesting news, reports and rumors that I present to you in the Sir Apfelot newsreel. This time you will get the Apple and tech news that caught my eye in calendar week 11 of 2021. Topics like these are included: Mecklenburg-Western Pomerania should do without Microsoft, Mars rover Perseverance sends sound recordings, NASA tires for your bike, reference to iMac with Apple Silicon, rumors about new iPads, the upcoming Apple event, Age of Empires IV, the new map for Among Us and more.

Microsoft is to be dispensed with in Mecklenburg-Western Pomerania

Make that demand, according to one Entry von heise online, the corresponding data protection officer and the court of auditors. The state government and its authorities should end the use of Microsoft offers and rely on open source solutions through "immediate action". This is intended to limit the dependency on US companies and the outflow of data. After the report there was an explanation of the statements on the part of MV's data protection officer Heinz Müller to heise online: "[...] Of course, as a realist, he is aware that the state government cannot immediately do without Microsoft products. He understands his message from Wednesday as a warning shot […] “You can find details in the linked source.

How does Mars sound? So!

Golem, for example, shows what a ride across the surface of Mars in a Perseverance rover sounds like at this point with reference to the current Soundcloud uploads from NASA. The latest uploads include four audio files that come from our red neighboring planet: "Perseverance Rover Sounds from Mars", "First Audio Recording of Sounds on Mars", "Sounds of Perseverance Mars Rover Driving - Sol 16 ( 16 minutes) "and" Sounds of Perseverance Mars Rover Driving - Sol 16 (90-second high-lights) ". It is very likely that more will follow. If you scroll down the list, you will find even more Perseverance recordings as well as episodes from the NASA podcast and other audio content.

Bicycle tires without plates, but with "NASA technology"

At Golem it goes straight to the space news, here but for earthly use. Because in the linked message, bicycle tires are presented that are supposed to be modeled on those tires that roll on other planets in our solar system thanks to NASA. The bicycle equipment is not offered directly by NASA, but by the US company Smart Tire Company. The tire model called "Metl" does not have to be pumped up, but should provide the necessary elasticity with maximum robustness through a metal mesh. "The Metl tires are expected to hit the market in 2022. They will be available in gold, silver and metallic blue", is it [called. Nothing can be said about the price yet.

This is roughly the title of 9to5Mac at this point in English. Referring to a report by Atlas VPN, it is shown that in 2020 a “record number” of malware for macOS systems was found. On average, 1.847 new threats to Mac, iMac and MacBook are reported to have been found per day. Overall, according to the report, the number of Mac threats grew by 2020 possibilities in 674.273. A high increase if you consider the 55.556 new reports from 2019, the 92.570 finds in 2018 or even the comparatively few 28.949 from 2017. Nevertheless, it is written that the whole thing is only a fraction of the Windows malware that is circulating in this way. There the numbers go into the millions! You can find overviews in diagram form in the linked source.

In line with the 9to5Mac report, Jens has just forwarded an email from Objective-See and Patrick Wardle, respectively, about new malware. The XcodeSpy Malware directs its malicious efforts against developers who work with Apple's Xcode. XcodeSpy itself is not yet recognized by antivirus programs, but the spy malware called "EggShell" that it installs can be recognized. In the corresponding Patreon post you will find more detailed information as well as free tools with which you can track down the pest. There is also more information in one Post by Ars Technica.

That's what Apple headlines in a current press release. "While the pandemic has forced people across Germany to adapt every aspect of their lives and stationary retail has increasingly shifted to the internet, the iOS app economy has been a resilient source of opportunity, innovation and economic growth“, It says among other things. And: "Developers all over Germany have generated more than two billion euros in total revenue to date - with a growth of 21 percent in 2020 compared to the previous year.“You can find more information, figures and data on the topic with the link to the message.

Xcode Crash Log may be leaking the first ARM iMac

Amongst other things here at MacRumors you will find a message that refers to a find by the developer Dennis Oberhoff. In a crash log of Apple's developer tool Xcode, he found a reference to the iMac with “Apple Silicon”, which will probably be released this year. While working on his DaftCloud app, the corresponding message appeared and indicated an iMac as the device and ARM-64 (native) as the code type. The fact that this message came about probably means that Apple may have prepared the Xcode developer tool for the device before the iMac was released.

If Apple does not invite you to participate in an online keynote planned for Tuesday at very short notice, it can be considered canceled or postponed. Because it was still valid at the beginning of March 23.03.2021/XNUMX/XNUMX as a safe date for an Apple event around the AirTags, new AirPods, iPads and a new model of the Apple TV. However, an official confirmation of the date has not yet been received. It is now rumored that it will take place in April or will be made up for. So it remains exciting: D

This week, 9to5Mac has two articles about new iPad news and rumors. These are once again based on statements from the analysts Ming-Chi Kuo and Mark Gurman. An iPad Pro with mini LEDs will appear in April. Further mini-LED displays are to be installed in the MacBook Air, for example - but not until 2022. The 2022 iPad Air will, however, have an OLED screen. OLEDs are cheaper than mini-LEDs, which is why they fit more into the budget models of Apple's devices. Furthermore, the upcoming iPad Pro should not only bring a USB-C port, but also Thunderbolt specifications. That would mean greater compatibility with accessories. There are more details here and here .

Fans of the RTS game "Age of Empires" offered by Microsoft (to which I count myself) are waiting since 2017 patiently for new news about Age of Empires IV. The fourth part of the traditional video game series was announced at Gamescom; after that it became extremely quiet about the title. In between came z. B. Age of Empires II and III out as Definitive Edition, but nothing more was heard about AoE IV. Now I'm about one Entry stumbled, after which there should be a fan preview on April 10, 2021 at 18:00 p.m. You can find all details and a countdown to the stream at ageoempires.com.

Not only do I count myself among the AoE fans, but also among the fans around Among Us. Last year, when the game went completely through the roof (not least because of the worldwide lockdown situation), a new map with new functions and tasks was announced. Well it was on Twitter the official announcement from the developersthat the map "The Airship" will be playable from March 31, 2021. There is a high probability that the servers will work up a sweat on the day, as not only private players but also many streamers including the audience will rush to it again. I'm curious when I can realize a game with my Discord round: D