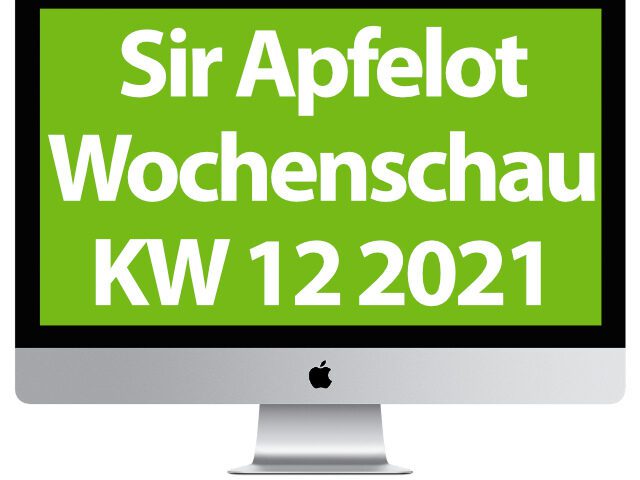 In addition to the release of Story of Seasons: Pioneers of Olive Town there are a few more interesting things to announce this Friday. It's good that the Sir Apfelot newsreel is there for that. In today's issue you get Apple and tech news from calendar week 12 of 2021. Among other things, the following topics are included: media literacy in Germany, news from the aerospace sector, Apple with new teaching tools, 20 years of Mac OS X, hidden sensor in the Apple HomePod mini, references to Apple display speakers and more. So an exciting week! : D

Media literacy in Germany could be improved

IFun is going on a corresponding study in a current one Entry a. This shows z. B. on how many test subjects were able to identify posts on social media platforms as advertising. Among other things, a screenshot excerpt is shown on which it says: "56% mistakenly considered the advertorial to be information". Further statements also show a need for action, not only in digital terms: "49% knew that the Süddeutsche Zeitung is a private-sector offer. 33% considered it to be an offer under public law.“In addition, the majority were unsure or did not know that the top 10 search results on Google would not be checked by Google employees. Terrifying!

This week I found several reports on astronomy and space travel on heise online. So that I don't tell too much here, I'll simply list the three messages I wrote down. If they sound interesting to you too, just click on the respective link:

Apple is expanding the free offer for teachers

"The company launches Apple Teacher Portfolio and updates the Everyone Can Be Creative curriculum, Schoolwork and Classroom apps“, It is summarized in the introduction to one current press release from Apple. The new offer is intended to help teachers bring creativity to all teaching content, regardless of the place of study and the learning situation. Of course, Apple also emphasizes its own commitment and shows that it has been working with teachers for over 40 years. You can read the whole PM with the link given.

This week, MacRumors, among others, pointed to the 20th birthday of the Mac operating system Mac OS X with a Entry down. The Mac, iMac and MacBook operating systems came onto the market on March 24, 2001 and, with its first version (Cheetah), was remembered by users mainly because of the “Aqua” user interface. Since then, there have been constant innovations and adjustments, until the last form of the system, now known as OS X, came out in 2019: macOS 10.15 Catalina. In 2020 the series was replaced by macOS 11 Big Sur. You can find an overview of all previous operating systems for Apple computers here: Mac operating systems with name and version number at a glance.

That sounds sensational, doesn't it? : D The sensor that Apple did not mention when the HomePod mini was presented last year is only a sensor for temperature and humidity. It is not yet activated and could start working with an update of the system software. This could be used to create HomeKit automations for ventilation or heating, for air humidification or the like. Other areas of application are also conceivable. Why Apple has not yet activated the sensor and whether it has anything to do with the company's planned products is not entirely clear. Bloomberg News was one of the first to report on this at this point.

Does Apple want to compete with Amazon's “Echo Show”?

Apple could plan versions of HomePod with a camera and display, like MacRumors with reference to Bloomberg writer Mark Gurman berichtet. Corresponding information is said to have been found in tvOS, the operating system that has been used on the HomePod and HomePod mini since 2020. A new version of the HomePod with camera and display could be the direct Siri answer to Amazon's Alexa solution "Echo Show". This is also a smart speaker with a camera and display and the option of video telephony. FaceTime would certainly be integrated in the new Apple product.

Further iMac models discontinued, indications of new ones are increasing

beginning of the month the iMac Pro became obsolete. In the meantime, other iMac models and their configuration options have also disappeared from the official Apple Store - even without the addition of “Pro”. For example, the magazine t3n goes on it at this point a. According to the contribution, the iMac portfolio is currently getting smaller and smaller. But that doesn't mean that the iMac will completely disappear from Apple's range, leaving only the Mac, Mac mini and MacBook behind. Rather, there should be brand new iMacs in 2021, in different colors and with an “Apple Silicon” chip. T3n goes into that too. MacRumors responded to the reference to two new iMac models in the code of macOS 11.3 Beta 5 . .

iPhone 13 Leak: Finally a narrower notch on the Apple smartphone?

Another one Entry from MacRumors may show the display design of the new iPhone range. The published photo is said to be a leak from a Greek repair service provider. It supposedly shows replacement glasses or protective films for the models of the iPhone 13 series, which should come onto the market in 2021. The narrower notch, which is supposed to result from the fact that some Face ID components are combined and the loudspeaker is to be built into the edge of the smartphone, is noticeable. By the way, from 2023 the notch will disappear and give way to a punchhole camera and a fingerprint scanner under the display.

"Intel Inside" - Soon also for Macs with Apple Silicon?

Intel doesn't seem to be quite clear about how to deal with the processor switch in Apple's computers. After an advertising campaign against the M1 chip was pounded out of the ground, the chip manufacturer is now apparently in favor of the "Apple Silicon" SoC. MacRumors goes on this ambivalent action at this point extensive one. It also shows what the anti-campaign should achieve and how one-sided it is. If you are interested in all the details, you can click into it.

From today you can Story of Seasons: Pioneers of Olive Town for the Nintendo Switch. Why this is the real Harvest Moon and why you should take a look when you've had enough of Animal Crossing, I have summarized that for you in a single post. There you will also find the link to the purchase options as well as a trailer and a video that shows the game development of Harvest Moon / Story of Seasons and explains the separation of the two series. Have fun! :)