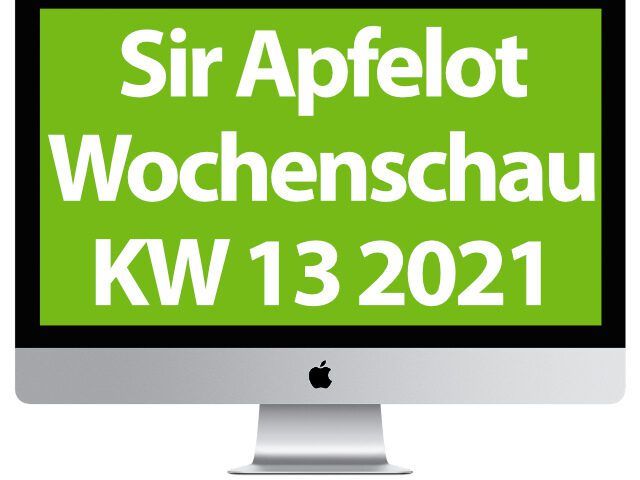 The first quarter of 2021 is over and we already have April 1st behind us - lucky ... Time to have a good old Sir Apfelot newsreel again. This time I'll show you which Apple and tech news caught my eye in calendar week 13 of this year. Among other things, the following topics are included: Xiaomi is launching an AirPower alternative, satellites are lighting up the night sky significantly, Unsplash has been bought up, Apple is referring to the EU directive on online shopping, new Apple patents, video games for the simulated Summer vacation, and more.

AirPower, but not from Apple: Xiaomi charger with 19 Qi coils

Like mobiFlip, among others at this point shows, Xiaomi has apparently achieved what Apple was unable to do despite a big announcement in 2017: a Qi charging mat on which the devices to be charged can be placed anywhere. After introducing Qi technology in the iPhone X, Apple actually wanted to bring such an accessory onto the market, but it failed. Xiaomi has now announced an "AirPower" copy. She is said to have installed 19 Qi coils. However, there is a hint that the gadget is "quiet", which can indicate a fan. A certain amount of heat is therefore to be expected.

Satellites and space junk: The night skies are 10% brighter everywhere

This is what it says with reference to a current study for example in one Items of spectrum. It bears the appropriate heading "No satellite is lit anywhere“And deals with the research carried out by a team led by Miroslav Kocifaj from the Slovak Academy of Sciences. A note in the article that makes the study important: "According to a resolution [...] Observatories should only be built where the artificial light pollution does not exceed the background lighting by more than ten percent. If you follow the calculations of Kocifaj and team, there is nowhere in the world where a telescope should be built."

This year, fans of the series "Rick and Morty" can look forward to new episodes - where we are already on the subject of space travel. After the US premiere comes how reported here, the fifth season first on the pay-TV channel TNT Comedy. Whether there will be quick availability again on Amazon Prime Video, like season four, that's not out yet. But on June 21st it should definitely start in the said place.

Anyone who has been visiting the Sir Apfelot blog for a long time already knows Unsplash. For example from posts like Free, royalty-free photos and images for bloggers and webmasters or Unsplash Wallpapers: Free wallpapers for the Mac at the touch of a menu bar. Like me now in a Entry Read of iFun, the platform was bought by Getty Images, a more commercial stock image provider. Now we have to see if and how Getty Images will try to make money from the Unsplash offer. Because so far the images there have been licensed and free of charge, which is why I also like to use them for Sir Apfelot. If there is a change, you can still switch to Pexels and Co.;)

With an email and a new one Support document alerts Apple to online purchases and related European Union guidelines. It is shown that there can be delays in digital shopping with credit or debit cards because verification mechanisms are used. But Apple is not entirely altruistic in pointing out these circumstances; because it says, for example, in the email to Apple customers from the EU: "However, the built-in security features of Apple Pay already meet the new requirements. This means that with Apple Pay you can avoid additional steps at the checkout and pay more securely than if you only use your debit or credit card."

MacRumors goes into a rather controversial investigation among the system makers (Apple and Google) at this point a. It emerges from the efforts of Douglas Leith of Trinity College and is intended to show that Android from Google collects 20 times more data from users than iOS from Apple. However, the systems used (iOS 13 and Android 10) are somewhat out of date and there should be several weak points in the designs. The iPhone ticker also goes in one Entry to the study, which can be downloaded as a PDF, under the heading “Every 264 seconds: the iPhone sends this data to Apple without being asked”.

MacRumors was talking about two new patents from Apple this week (here ) and with 9to5Mac (here ). The first report is that Apple has applied for a patent for device cases with heat dissipation. The “cheese grater” look familiar from the Mac Pro (2019) is applied to the iPhone and the “trash can” Mac. MacRumors shows mockups of the possible design in the linked post. Should the iPhone come onto the market without a glass pane or other protection, an iPhone case would almost be a necessity to keep the device clean. The second message from 9to5Mac is about Siri and that in the future you will be able to adjust your volume to the environment, that is, in addition to the standard volume, you can also “scream” or “whisper”.

Apple presented the first Retina MBP with a 13-inch screen in October 2012. Now the device - like the mid-2012 15-inch models - is declared "obsolete" and no longer has hardware support. The berichtet including MacRumors, referring to Apple's list of obsolete devices that you see here can. In German, however, Apple no longer calls the products "obsolete" (that is probably too negative), but rather as "obsolete". I already told you what the distinction between Apple's "vintage" designation is shown at this point.

Hotel Life - Build your own digital holiday resort from August

With “Hotel Life”, a resort simulator will be available on current consoles and PCs on August 26, 2021 (via the Steam client). The game, with which you can build your own holiday resort and manage it, comes from the developers at RingZero Game Studio and from the publisher Nacon. In addition to Windows, it should also appear for the PlayStation 4 and 5, for the Xbox One and Series and for the Nintendo Switch. Whether it will satisfy the longing for vacation during the pandemic or worsen it remains to be seen. You can find more information in the following embedded reveal trailer for Hotel Life.