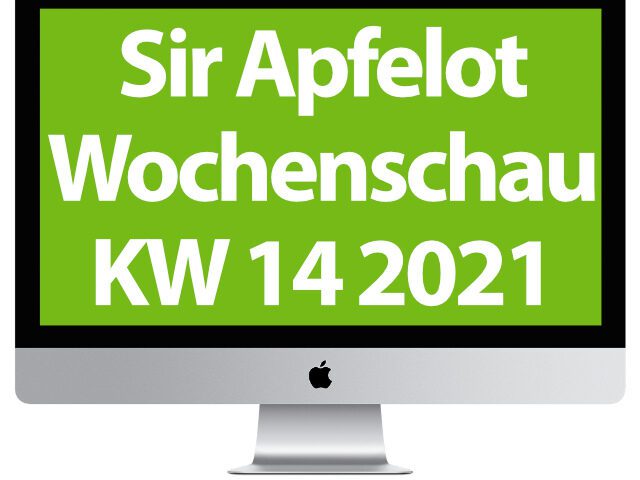 Finish today and it's the weekend again. But before that there is, you already guessed it, a new edition of the Sir Apfelot Wochenschau. This time I'll show you which Apple and tech news caught my eye in calendar week 14 of 2021. Among other things, the following messages are included: Lyra Codec is now open source, Google apps now with data protection information in the App Store, Apple's “Where is?” Service opened for third-party providers, Tim Cook's insight into the future of Apple, and more more. At the end there is information about bot comments on YouTube.

Included in the Sir Apfelot weekly newsreel for calendar week 14 of 2021: Lyra codec as open source, Twitch with stricter rules, Apple's “Where is?” Network for third-party providers, new Apple TV with 120 Hz, and more.

Saving speech in an extremely space-saving manner - that is the job of Lyra, a codec from Google. Thanks to artificial intelligence and machine learning, it should make it possible to encode voice recordings at just 3 kbit / s while maintaining the quality of the recording. Like a golem in one Entry from this week shows, Google has now released the software so that it can be used as open source. "The code for use, available as open source software, contains the necessary tools to encode and decode speech yourself with Lyra", is it [called. You can find the lyra code here on GitHub.

Current Facebook data leak: Even Mark Zuckerberg is said to be affected

And data protection greets you every day. There should have been extensive data theft on Facebook. Data from no fewer than around 533 million users are said to have been viewed and copied. That should have happened before September 2019, as it is called by Facebook itself. Like MacRumors, among others at this point writes, the account information of the company's founder and CEO Mark Zuckerberg should also have been among the data. It is questionable whether this will result in an improvement in data protection in Facebook, Messenger, WhatsApp and Instagram.

Twitch: Users should be blocked for offenses outside the platform

Anyone who streams on Twitch must adhere to the rules of the platform, which is now part of Amazon. Among other things, streamers can be blocked for insult, harassment, nudity and similar misconduct shown in the stream. The platform now also wants to reserve the right to close the account of streamers if they attract negative attention outside the platform or if they become delinquent. Twitch lists in the published blog post different examples. Furthermore, the e-mail address to which offenses can be reported is shown. A FAQ answers the most important questions on the topic.

Want to stream on Twitch? These contributions can help you:

When it comes to data protection information, Google is one of the laggards among the developers who offer their software in the Apple App Store. There, a corresponding label should show which data an app collects and passes on from users. Like iTopNews in one Post shows, Google has now submitted the relevant information for apps such as Google Maps, Chrome, Google Photos and Co. "A first look at the Google labels shows, for example, that Google Maps and Google Search track your location, search history, browser history, IDs and usage data for third-party advertising purposes", is it [called.

“Where is?” - network open for third-party providers: Are the AirTags still coming?

It's quite a surprising move Apple took this week. The tech giant from Cupertino has not yet presented the company's own “AirTags” trackers, which have been expected since last year, but has opened the necessary wireless network for its iOS devices to other manufacturers. Like the iPhone ticker berichtet, there are already first offers, including key fob tags. In addition to a bicycle and headphones, the key fobs are particularly interesting because they are basically in direct competition with the AirTags. Will these still come onto the market? That will have to be seen.

The upcoming model of the Apple TV could bring a refresh rate of up to 120 Hz. At least those dataminers who have looked around the current beta of tvOS version 14.5 assume this. According to one, the firmware update relates to the current Apple TV Entry be excluded from 9to5Mac, as it only has an HDMI 2.0 connection that supports a maximum of 60 Hz. At least HMDI 120 is required for 2.1 frames per second in the video output. Freely translated, the message also says: "With a higher refresh rate, the interface would feel much smoother - and games could also benefit from the technology. This would of course [...] require a 120Hz-compatible television."

Tim Cook talks about the future - of Apple and himself

Several pages went into a recent interview with Tim Cook, Apple's CEO, this week. In the interview conducted as part of the “Sway” podcast, Tim Cook says, among other things, that in 10 years he will probably no longer be Apple's managing director. Furthermore, it is about the app Tracking Transparency (ATT) and the debate that Facebook has initiated. In addition, augmented reality was once again highlighted as an important topic. There were further statements z. B. to the legal dispute with Epic, to Tesla as a start-up company and so on. There were reports from the Macerkopf (.) and at iFun (.).

The channel “Ultralativ”, known for its astute analyzes and good research, once again brought a very informative video to subscribers' subscription boxes this week. In "You write all bot comments“It's about the evolution of comment bots on YouTube. If you are not careful, their comments are always harder to recognize than computer-generated inputs. This is due to the fact that some of them simply copy comments that have already been made and put them under the same video again. Account name and picture should then invite people to click and lure them to certain pages via links in the profile. You can find the video with this link or embedded in the following: