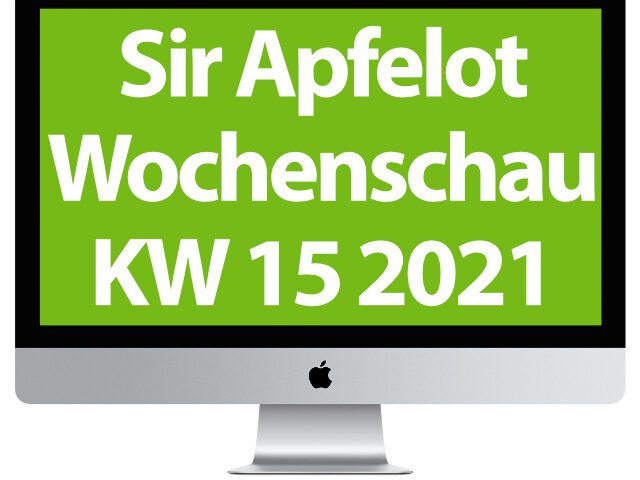 If the April weather tempts you to prefer to stay indoors, then this Friday there is again the right reading to pass the time. In the new Sir Apfelot Wochenschau you can find the Apple and Tech news that caught my eye in calendar week 15 of 2021. Among other things, these messages are included: The date of the next Apple event has been set, problems with the Luca app, increased malware in the pandemic, (possible) new developments from Apple, and a few more.

Apple event Deadline, Google Earth Timelapse, CCC calls for the Luca app to be stopped, digitization in Germany, iPhone 13, and more." width="1024″ height="484″ /> In the Sir Apfelot newsreel for calendar week 15 in 2021 you will find the following, among others Topics: Apple Event Date, Google Earth Timelapse, CCC demands stop of the Luca App, digitization in Germany, iPhone 13, and more.

It was only rumored this week that Apple was planning an event for next week, and not much later it was confirmed by the company. The “Spring loaded” event will take place on Tuesday, April 20, 2021 at 19:00 p.m. local time. Rumors about the products that could be presented, as well as links to the websites where you can follow the keynote as a stream, can be found here: Apple event confirmed - how to find the live stream!

Google Earth has received an extensive update and now uses a timelapse feature to show changes in the world or individual regions in time lapse. Much can be traced from the growth of some cities to the deforestation of the rainforest to the melting of the ice masses. Depending on the available image material, the course over time can be displayed over several years or even several decades. I have compiled more details and videos showing some timelapse examples for you in this post: Google Earth with 4D function: timelapse with satellite images.

The Luca app should be a new, better solution for contact tracing in terms of fighting pandemics. In the last few weeks, however, various headlines and articles have repeatedly pointed out that something is wrong with the app. This week the Chaos Computer Club (CCC) demanded an "emergency brake" from the federal and state governments. "Doubtful business model, inadequate software, irregularities in the award of contracts: The Chaos Computer Club (CCC) calls for the immediate end of the state support for Smudo's million dollar tax grave 'Luca-App'.“, It says in the introduction in this CCC article.

Clear words are found - against the poor development of the app, the thoughtless rushing ahead into its use, the application by the investor Smudo (rapper), the dubious use of the app, etc. "The CCC calls for an immediate moratorium, a review of procurement practices by the Federal Audit Office and an immediate end to the compulsory app. The country-subsidized roll-out of unchecked software is forbidden for handling highly sensitive health and movement data“Is just one of the clear statements. Finally, in the form of the summary, a "immediate stop and complete clarification" required.

Malware in the guise of meeting apps

But the Luca app isn't the only questionable piece of software that has grown out of the coronavirus pandemic. Like the Swiss PocketPC magazine at this point shows, more and more malware is disguised as meeting apps. With reference to Kaspersky it is written that the fake video conferencing offers are said to have increased by 1.067% in just one year. In the post there is not only this analysis, but also tips for cybersecurity as well as links to the official Android and iOS versions of Zoom, Microsoft Teams, Slack, Cisco Webex Meetings, Highfive Video Conferencing, Lifesize Video Conferencing, join.me , flock, GoToMeeting and Jitsi Meet.

Germany is lagging behind digitization

The Handelsblatt is with one Articles discussed digitization in Germany this week. The deficits that exist here are at least very evident in the corona pandemic. While digitization has to work in the home office and is therefore usually making good progress, there is not much progress in administration, in the health authorities or in schools. The article refers, among other things, to the scientific advisory board of the Ministry of Economic Affairs. This is quoted: "'In public administration, Germany has structures, processes and ways of thinking that sometimes seem archaic,' it says in plain words. There are 'various forms of organizational failure'."

With reference to possible CADs (CAD = computer-aided design) it says in one Entry from MacRumors that the camera module of the iPhone 13 will take up noticeably more space than that of the iPhone 12. This can point to larger lenses on the one hand, but also to more technology. With the iPhone 12, the Pro models already have three lenses, a LiDAR scanner, the flash LEDs and the microphone. We can currently only speculate whether a fourth lens or even more special technology for AR applications will be added. In addition to the camera module, the Apple smartphone itself is also expected to grow. The case should be about a quarter of a millimeter thicker.

Like Bloomberg (here ) reported in English and iFun (here ) in German, Apple should work on two new devices for the home. From a competing product to the Echo Show 10 with a movable display that follows you during video telephony has already been discussed in the past few weeks. In addition, according to Bloomberg's Apple professional Mark Gurman, an Apple TV with speakers is also in the works. This could possibly be placed in front of the television as a soundbar and not only provide video and music streaming, but also high-quality audio output. Both sources emphasize that product development is said to be still at an early stage.

Apple has published two documents aimed at demonstrating the company's environmental awareness and sustainability. The first is the "Environmental Progress Report", which deals with climate change, raw materials and a "smart chemistry" on 101 pages. You can download the corresponding PDF file with this link download. The iPhone ticker has a summary with a Post released. In addition, there was a press release from Apple this week showing that the company and partners have set up a restore fund of $ 200 million. Its aim is to accelerate nature-based solutions for climate change. You can read the PM in German with this link.