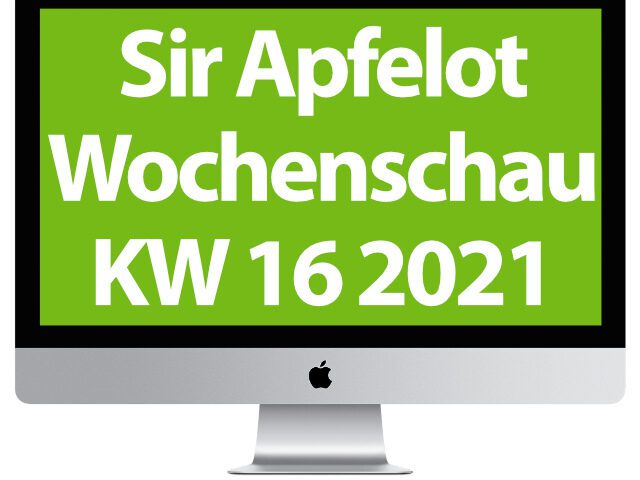 An exciting week is coming to an end, but of course not without the Sir Apfelot newsreel. In addition to the Apple event on Tuesday evening, which recently dominated the content here in the blog, there were a few more exciting news from the technological world and from the solar system this week. The Apple and Tech News from calendar week 16 of 2021 therefore include the following news this time: Perseverance filters oxygen from the Martian atmosphere, Ingenuity flies through it, the Corona warning app has a new function, iOS 14.5 limits Facebook's tracking, the Nintendo Switch gets a photo printer, and more.

In the Sir Apfelot newsreel of calendar week 16 in 2021: Apple April event, Perseverance and Ingenuity, Corona warning app 2.0, the new iOS 14.5, rumors about the MacBook Pro 2021, a Nintendo Switch printer and more.

On Tuesday there was a new pre-produced keynote that was broadcast instead of a live event to introduce new Apple products and services. At 19:00 p.m. local time, the stream started on the Apple website and on YouTube. The new 24-inch iMac, the new iPad Pro models and the AirTag trackers were well presented. There is also an Apple TV 4K with A12 chip and HDMI 2.1 as well as family use of the Apple Card and subscription options in the Podcasts app. The iPhone 12 will also soon be available in a purple hue.

Here are the individual articles for reading:

Questions and answers about the new Apple devices

In addition to the summary of the "Spring Loaded" event from Apple and the technical data and prices of the new products, I have already given you the answers to related questions in other posts. However, these refer not only to the new devices, but also to those that have already been used. Especially those who deal with the Apple TV:

Oxygen on Mars: Perseverance bundles the air we breathe

The atmosphere on Mars is not exactly people-friendly. It consists mainly of carbon dioxide and only a small proportion of oxygen. In order for the astronauts to be reliably supplied with breathing air during a Mars mission, the oxygen would have to be filtered out and bundled. And that's exactly what the Moxie module of the Perseverance Rover did on Mars. Like among others t3n berichtet, 5 grams of oxygen could be filtered, which corresponds to breathing air for 10 minutes. The article shows how much would be needed for humans on Mars: one ton of oxygen for four astronauts and one year.

If man-made flying objects have never taken off on Mars, then it is not difficult to set new records for them - one might think. But how does it mean online at this point shows, the current performance of the Ingenuity drone on Mars is quite impressive. The mini helicopter was able to fly 5 meters high in the extremely thin Martian atmosphere and maneuver sideways. Ingenuity is not part of the main mission of the Mars rover Perseverance, but is a kind of tech demo that is supposed to show that z. B. Drones can be used to explore Mars. Cargo drones, however, are unthinkable; the air transport of loads is hardly possible due to the low atmospheric density.

Let's come back to earth, where the coronavirus pandemic is unfortunately still rampant. The Corona warning app from version 2.0 now offers a check-in function for tracing contact chains and possible infections. A button with a QR code symbol has been added to the lower menu bar of the app for this purpose. If you visit an event, a shop, a conference or the like, you can use the feature to scan the QR code provided there. The data will then be stored for 16 days. If someone reports an infection with the same scan, there is a notification. You can download and update the app in Apple App Store (iOS) as well as in Google Play Store (Android).

Apple operating systems: iOS, iPadOS and tvOS in the 14.5 version

The new major updates for some of the Apple operating systems are to be rolled out next week. In addition to the color balance feature for the Apple TV and the iPhone, there are other things to emphasize in this regard. Like CNet shows iOS 14.5 takes on the tracking of Facebook and Google. In addition to AirTag functions and unlocking the iPhone with the Apple Watch, the privacy content of the update protects against tracking across apps. For example, Facebook must obtain the appropriate consent and display a message in its app for this. Unfortunately, the fact that digital tracking is emphasized by users does not mean that this practice will also end.

Blackmail leak: are these the new ports on the MacBook Pro?

A hacking group that calls itself REvil is said to have obtained data from Apple supplier Quanta, including 9to5Mac berichtet. Previous leaks of technical drawings of the new iMac should prove that the hack actually took place. The group threatens to publish further details about Apple devices and their technology. 9to5Mac has taken this as an opportunity to reiterate the rumors about the MacBook Pro 2021. This should have a MagSafe power connection, an SD slot, an HDMI connection and up to four USB-C or Thunderbolt connections. USB-A or Mini-DisplayPort does not seem to be provided. You can find mockup images in the linked source.

Instax: Photo printer and app for the Nintendo Switch

Anyone who used the Game Boy Camera in the 90s probably also knows the Game Boy Printer. With this small printer, pixelated stickers could be created from thermal paper by pairing the device with the Game Boy and a compatible game. "The Legend of Zelda: Link's Awakening DX" was such a game. A new, less pixelated and even colorful way to print game content quickly is now offered by Fujifilm in cooperation with Nintendo, such as JP Games shows. Screenshots made on the switch are sent to the smartphone and forwarded there to the mini printer via the app. This is sure to be a hit, especially for the game "New Pokémon Snap" - including the Pikachu cover for the printer (see link).