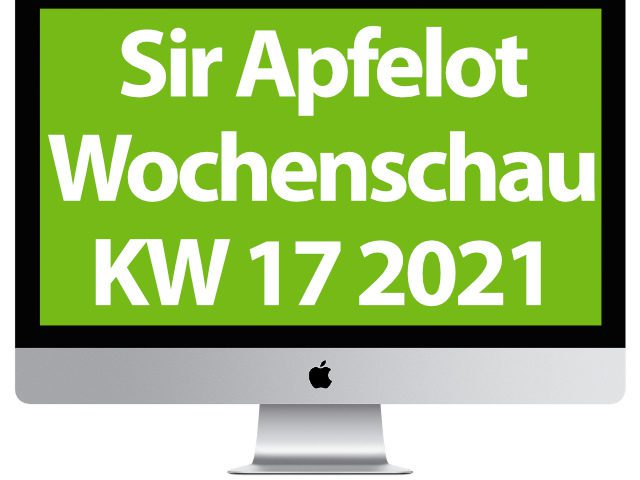 Not only does this Friday appear New Pokémon Snap for the Nintendo Switch, of course there is also a new Sir Apfelot newsreel. This time I'll show you which Apple and tech news caught my eye in calendar week 17 of the year 2021. In fact, this time around, Apple news prevails. But there are a few other messages besides these. The following are among others: Fake shops sell (no) PS5 offers, Spotify with 356 million active users, Apple has M2 chip produced, the pros and cons of AirTags, macOS and iOS security gaps, Super Mario Party now online, and more.

Included in the Sir Apfelot weekly newsreel of calendar week 17 in 2021: Fake PS5 offers, Spotify with an increase in users, Apple has an M2 chip produced, the pros and cons of AirTags, macOS and iOS security gaps, Super Mario Play Party Online, and more.

Fake shops offer PlayStation 5, but do not send anything

There is still a shortage of Sony's current PlayStation console. Even months after its launch, the PS5 cannot be bought by everyone who wants it. Fraudulent elements sense this situation as an opportunity and set up fake shops in which the PS5 is offered at unusually low prices. One would think of a bargain that contradicts supply-demand pricing. But it quickly becomes clear: only money is made here, but no consoles are sent. For example, the shop "Elektro-King.net" at this point pointed out. This one is fake and you should definitely not buy it there.

Spotify at the forefront of music streaming providers

Spotify, the Swedish streaming provider for music, podcasts and co., Has seen an increase in the number of users in recent months. Of the total of around 356 million monthly active people, 158 million are who pay for the premium subscription. It goes z. B. iFun with a Entry a. "Looking at the financial success over the past three months, Spotify is satisfied. With a turnover of 2,147 billion euros, they are at the upper end of the forecast range“, It says among other things

By the way, there is also a new video from Ultralativ, which is made in cooperation with So many tabs originated. In the video that you with this link finds, it is, among other things, how careers can be faked with Spotify, i.e. how playlists and the algorithm are used to artificially push bands or artists. In addition, Spotify is set in relation to other streaming providers such as Apple Music, Amazon Music and Deezer.

Mass production of the M2 chip: Macs with the new “Apple Silicon” in 2021

Personally, with the purchase of an Apple Silicon Mac, I am waiting for the release of a MacBook Pro with a 15- or 16-inch display. One Entry From all-round PC to one, even if it appears this year, it could appear with the next Apple Silicon - the M2. Accordingly, the successor to the current M1 chip should already be in mass production. Starting in July, it could be added to the supply chain so that it could well be built into Apple laptops that will be released in the second half of 2021. I'm definitely curious!

The pros and cons of Apple AirTags

After a long wait, Apple has launched its own Bluetooth tracker for the “Where is?” Network: the Apple AirTags. While some strike hard and equip all their mobile belongings with the small radio badges, others report their extensive concerns. Both sides offer valid points. At MacWelt, two editors took up the topic and wrote a pro and a contra post, each with personal views and opinions on Apple's AirTag tracker. I found both articles worth reading: Contribution PRO AirTag and the Contribution CONTRA AirTag.

You can find my contributions to the Apple AirTags here:

This week there were a few reports about security gaps in Apple systems. One of them came from Objective-See and dealt with bypassing Apple's file quarantine, gatekeeper and similar measures. The contribution to it you can find here. In the email on the subject, however, it says that there is already a patch from Apple and that a macOS update is therefore recommended.

Other sources this week covered a vulnerability in AirDrop that appears to have not been fixed. Among other things, I have something to do with Basic Thinking (here ) and Scinexx (here ) seen. Hackers could read out personal data via a small detour when transmitting data via Apple's AirDrop, they say. For example, the telephone number or the e-mail address. The problem has been known to Apple since 2019. "So far, however, Apple has neither confirmed the data protection gap nor announced that it will work on a solution“, It says at Scinexx.

With iOS 14.5, Apple introduced a feature for more data protection and privacy on the iPhone: App Tracking Transparency, or ATT for short. How you activate the function so that apps have to ask you for your permission to track, I have shown you here: iOS 14.5 - How to find the app tracking setting. In the guidelines for developers, Apple also shows that it is not accepted if users are rewarded for agreeing to the tracking. MacRumors quotes the corresponding guideline passage at this point. It also states that there must be no visual highlighting of the "Allow" button. The decision must not be influenced by other influences either.

Super Mario Party: Finally there is an online mode!

It should be known that Nintendo always lags a bit behind in terms of online connectivity for games on the Nintendo Switch. If you were a pioneer in this area with previous consoles, even with handhelds, you wait a little too long on the current console to play with friends all over the world. This possibility is now finally available for “Super Mario Party”. The party game, which debuted on the N64 and, after many revisions, also landed on the Nintendo Switch, can now be played in different modes or in the individual mini-games together with others, regardless of whether they are next to one end or at the other end sit in the world. Via the so-called "Internet": D