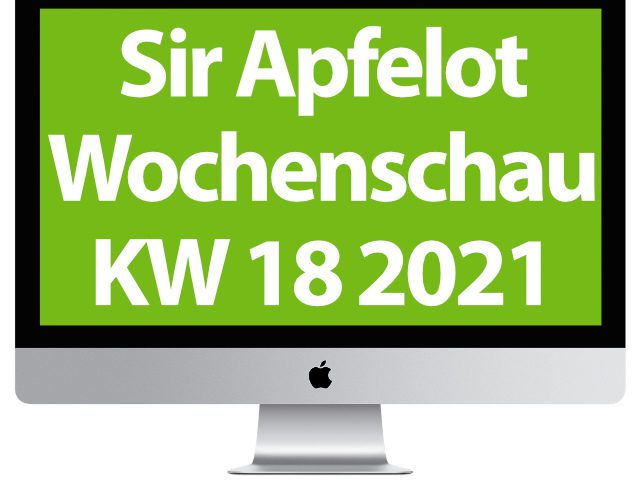 May is here, but the warm weather is still a long time coming. While we're doing this, let's take a look at the Apple and tech news that caught my eye in calendar week 18 of 2021. That's right, it's time for a Sir Apfelot newsreel again. The topics this week include: Dell drivers with security holes on the road for 12 years, eBay is considering payments with crypto, hydrogen generation in its own garden, Apple patches security gaps in operating systems, AirTag test in the mail and more.

Included in the Sir Apfelot weekly newsreel for calendar week 18 in 2021: security gap at Dell, Crypto maybe soon on eBay, Discord from 2022 in the PlayStation, hydrogen from the garden and Audacity at Muse - and much more.

Among other things, on the IT specialist page Golem it says in one Entry: "PC manufacturer Dell warns its customers about serious security holes in an update driver. That should be uninstalled.“Not only desktop PCs are affected, but also laptops and tablets that use the Windows operating system. The vulnerabilities are identified with the identifier CVE-2021-21551. Hackers can use these to gain full access to the system. One solution should be to uninstall the Dell Support Assist software, but this should only be possible from May 10th. The manufacturer lists the affected devices (since 2009) here .

Pay with crypto currencies on eBay? Could be possible ...

Bitcoin, for example, could soon be used on eBay to shop. Heise online points this out in a Entry down. It refers to CEO Jamie Iannone, who told CNBC that they are looking for additional payment options. Apple Pay and Google Pay are now accepted payment methods. The message also goes back to earlier flirtations of eBay with crypto currencies - these go back to 2013. At that time, the PayPal payment service was still part of the company.

Hydrogen through electrolysis on your own property

Should hydrogen develop into the energy carrier of the future and find its place as a heating medium in addition to its use in vehicles, then we should think about producing it in-house. This should now be possible in the form of a mini power plant that uses wind power to produce hydrogen by means of electrolysis. Scinexx reports at this point. "In the future, private households could also produce climate-friendly hydrogen for their own use - the technology for this is currently being developed by German researchers", is it [called. More precisely, research is being carried out at the Fraunhofer Institute for Applied Polymer Research IAP and the BTU Cottbus. Details can be found in the linked source.

Sony is getting involved in Discord: Chat soon on PlayStation

At the beginning of 2022, Discord should come to the PlayStation as an online exchange option for gamers. That goes from a Sony own Entry emerge. The technology manufacturer has therefore financially participated in Discord, according to its own information with a "minority investment". The plan is to expand the gaming experience and the social component of the PlayStation with Discord. However, it was not said whether a full app or an adapted in-game equivalent will be available on the console. The statements in the linked source can be interpreted in both directions. So here you keep a few things open.

Audacity is a popular program that makes it easy to record, trim, and edit audio on macOS, Windows, and Linux. The free open source project has now been bought by the Muse Group, berichtet including iFun. This already offers various apps from the audio sector, which is why Audacity is a useful addition. The best thing for all fans and users of the software is that it should remain completely free of charge. As noted in the iFun article, the new management of Audacity could result in a new interface. Personally, I would also like that, then the app would no longer look like Windows 98: D

If you use current Apple devices that use macOS, iOS and / or watchOS as the operating system, then you should update. This is used to close security gaps. For example, a problem with Safari is resolved, and there is a fix for an issue with app tracking protection on the iPhone. There are also updates for older devices, for example for iPhones with iOS 12. These can be updated to iOS 12.5.3. Heise has information on this online at this point summarized. You can also get details about the update to macOS 11.3.1 here in the blog: macOS 11.3.1 security update for macOS Big Sur closes two critical security holes.

In the video: Live tracking of mail items with AirTags

Whether it makes sense or not, that must be determined according to your own criteria. However, two videos were uploaded to the Dutch YouTube channel “AirtagAlex” showing the tracking of mail with an Apple AirTag - it is basically the same video, one in English and one in Dutch. Another video shows how to remove the speaker from the AirTag. I noticed the whole thing through one Articles with the iPhone ticker. Among other things, the implementation of the test is discussed there. For example, that the AirTag was addressed to the starting point and automatically running software started a location query every 120 seconds and took screenshots of the tracking.

It seems certain: the Nintendo Switch Pro is coming in 2021

"They just don't tear off: The rumors of an upcoming Nintendo Switch Pro!“, It says in one Articles on the Swiss PocketPC page. The Japanese business magazine Nikkei, which reports on a release of the Nintendo Switch Pro in 2021, is discussed. It is based on the fact that Nintendo wants to crack the sales mark of 30 million units this year and is ramping up the production of consoles for this. But that would be strange if it was really about the previous Switch, because it is already four years old (release in 2017) and due to the rumors of the last few months, some interested parties are currently waiting to buy the next version. So it remains exciting.