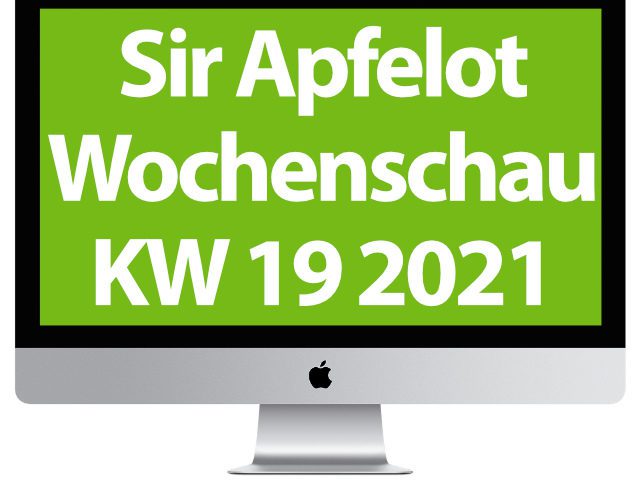 Half of May is already over, the first days of summer have shown up, and now it's Friday for the time being. That means it's time again for a new edition of the Sir Apfelot newsreel. In the following, I'll show you which Apple and tech news caught my eye in calendar week 19 of the year 2021. It will again be heavy on Apple and video games; The topics include: holograms in the air, leak about the new VR system from Sony, colorful MacBook Air models, AirTag hacked for the first time, rumors about an Apple game console, the latest about Nintendo Switch and the successor console, and other news.

In the Sir Apfelot newsreel of week 19 in 2021: Lasers project holograms into the air, VR details for the PS5 leaked, Apple AirTag hacked for the first time, iOS 14.6 allows email addresses for lost AirTags, Nintendo Switch in the Mid-product life cycle, and more.

Projected with lasers: holograms without a display

As part of an experimental research project, it was possible to project holograms into the air using laser technology. To do this, a particle in the air is picked up, irradiated and moved by the laser. This creates a kind of moving light that, at correspondingly high speeds, creates the illusion of a line, an object or an animation. The volumetric display research on which it is based is taking place at Brigham Young University (BYU) in Provo, Utah, under the direction of Professor Dan Smalley. There are details in text form with this link. You can see the current results as a video here..

Various media have indicated that under the hashtag #GameDevPaidMe on Twitter All kinds of people have disclosed their wage trends in the video game industry. Some developers show the hourly wages or annual salaries in the various positions that they have held over the years. It is noticeable how big the difference in pay is in different studios and their sizes, even with similar positions of the employees.

With Golem it says in one Entry in addition: "Smaller and independent developers often do not publish salaries, but give their concern about their own, at least from a financial point of view, much worse living conditions [...] Expression.“It is also speculated in the linked message that the movement of the salary disclosure with the book "Press Reset" by Jason Schreier related. At Amazon you can already have a look inside; it will be released on June 10, 2021.

UploadVR, an online virtual reality magazine, had one this week Article to the new VR headset from Sony, which is to appear for the PS5. In addition to a resolution of 2.000 x 2.040 pixels per eye, which results in something like 4K, there should be eye tracking and vibration in the headset. With this and with the new VR controller, extensive haptic feedback can be implemented in VR applications and games. The new VR technology is slated to come out sometime after 2021, so it won't be under the tree for Christmas this year.

The next Apple MacBook Air will (probably) be colorful

There was a yes to the rumor here at Sir Apfelot a message already on Monday. Accordingly, the upcoming MacBook Air, which is also said to have built in an M2 chip, has already been seen in the form of a blue prototype. But then there were other reports that again revolved around the leaker Jon Prosser. He has published render images, which should show the case of the upcoming MacBook Air, in seven different colors. A message with the corresponding graphics do you find z. B. here on the side of MacRumors.

Another Entry von MacRumors showed this week that a developer using the pseudonym "stacksmashing" was able to successfully hack an Apple AirTag. The changed firmware could be used to refer to a homepage defined by the hacker in "lost" mode. This could be used, among other things, to spread malware or conduct phishing. Information on the whole was e.g. here on Twitter released. There is also a Video about the background and the procedure on YouTube.

Apple wants to make itself independent of other manufacturers with its own chips and SoC models. This was most recently achieved with the M1 chip, which made Intel processors in the Mac obsolete. Apple also wants to manufacture and install its own cellular chips, for example for the current 5G standard. 5to2023Mac now means that Apple's own 9G modems could not be built into an iPhone until 5 at the earliest Articlein which one can look at Ming-Chi Kuo relates. The Apple analyst with a seemingly good information network in Apple's supply chain has often been right in the past.

Apple released a new beta for the iPhone operating system iOS 14.6 this week. New features emerge from this. Such as apple page, for example at this point reported, it should be possible with iOS 14.6 to enable the display of an e-mail address for lost AirTags so that the person who finds the tracker can report via e-mail. So far it is only possible to enter a telephone number.

Is Apple working on a Switch-like video game console?

Rumors are currently circulating that Apple should be working on a video game console. This should be similar to the Nintendo Switch. However, as several media point out, the individual information on the topic makes no sense and does not form a coherent picture. If only because Apple Arcade and other games for Apple systems can already be played on the move with the iPhone and iPad and, last but not least, with the iPod Touch. Eg 9to5Mac goes with one Entry on the rumors. It is believed that the rumors could possibly arise from misinterpreted information about Apple's mixed reality headset.

By the way, did you know that Apple had a game console on the market before? Information on "Pippin" from 1996 and details on why the device flopped, can be found with this link.

Nintendo News: Information about Switch Pro and the following console

In the last few weeks and months there have been new rumors that a Nintendo Switch Pro with more computing power and 4K resolution in TV mode will be released this year. According to one Article The rumors of mobiFlip are now said to be condensing into an OLED display for handheld mode. This would replace the current LCD panel.

There is also new information about where the Nintendo Switch actually stands in its product life cycle. Because the hybrid console - not least seen in comparison with the PS5 and Xbox Series X - cannot yet correspond to Nintendo's vision of a current console. Even the Pro version will only represent a transition. Because currently the switch seems to be in the middle of the hardware cycle. It's been on the market for four years now, so a whole new Nintendo console could be expected around 2025. The Info come from golem.