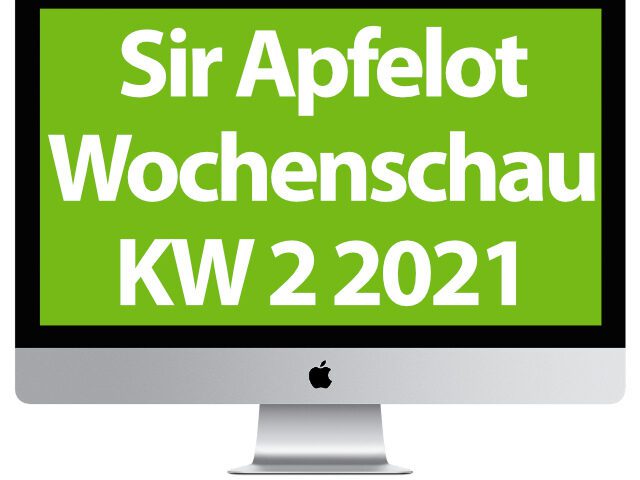 It's Friday, in parts of Germany snow is falling for a change and here is the new Sir Apfelot newsreel. At this point I'll show you which Apple and tech news I noticed particularly in calendar week 2 of the year 2021. The following topics are included: Cryptominer with 143 graphics cards, 70 TB of data theft from the right-wing platform Parler, Samsung smartphones as IoT devices, the end of Adobe Flash, new Apple hardware, 20 years of iTunes, 25 years of Pokémon and more. But it starts with a report on its own behalf.

The iPhone SE 3, 25 years of Pokémon, 20 years of iTunes, a data leak at Parler, a surprising flash off, 143 graphics cards - you can find more numbers and news in this Sir Apfelot newsreel for calendar week 2 in 2021.

The Sir Apfelot Forum is here

Do you have questions about Apple products and services? You want to talk extensively about Apple events or the posts here in the blog? Or are you looking for a place to ground your old PowerPC Macs in your hobby room? Then get in touch with the Sir Apfelot Forum at. There are a wide variety of channels for Mac, iPhone, iPad, iPod touch, Apple Watch, AirPods, software and more. There is also a category for photography and a job board for freelancers. Check it out ;)

It seems that the virtual "gold prospecting" is still worthwhile

As the headline of the technology magazine t3n, a "crypto miner [...] with 143 Geforce GPU supposedly makes 900 dollars a day". By doing Post it's about the American Simon Byrne, who creates the crypto currency Etherum with 78 "Geforce RTX 3080" and 65 "Geforce RTX 1080 Ti" graphics cards. According to his own statements, he wants to have earned the costs for the graphics cards and their operation after 50 days. If the Etherum price remains high or even rises, it could make a profit from its GPU arrangement from day 51. According to calculations by the Techarp blogs to which t3n refers, the investment should only pay off after a few months.

General terms and conditions change on WhatsApp: Users are looking for alternatives

I also have one at t3n Entry found when many users switched from WhatsApp to other messenger apps. As with the free and open source software Signal, the paid Threema app is said to be rushing. I have compiled information on the Signal, Telegram and Threema apps for you here: WhatsApp alternatives in 2021.

Data leak at Parler: 70 TB of data stolen from the right network

"Postings, videos and photos from Parler, including metadata, were easy to access due to bumbling security precautions," it says in one Post from golem. The platform Parler, which is popular with right-wing extremists and right-wing extremists, was therefore visited by “Internet activists”. These have apparently been hacked because the operating company showed in a press release which cloud services were used for Parler. All content could then be accessed with regular and unsecured access. The download was automatically implemented as a backup.

And again Golem: There is a Entry pointed out Samsung's “Galaxy Upcycling at Home” program, which was presented at CES 2021. Samsung has been offering upcycling options for old devices since 2017. These are now being expanded from industrial areas to private use. Samsung smartphones can be used as devices in the Internet of Things (IoT). For example, the old device can be used as a baby monitor. No further examples are given, as Samsung has not yet given any information about them.

In mid-2017, Adobe introduced its End-of-life plan for the Flash Player and the flash format before. The former pioneer in the field of animated Internet content has been declared obsolete and should be discontinued, removed and blocked everywhere by 2021. Now the time has come. After Adobe stopped support on January 1, 2021, the official blocking of Flash content started on January 12. How to remove the browser plug-in with official security holes from Mac and PC, I have shown you that here. Like Netzwelt schreibt, the router manufacturer "Extreme Networks" seems to have missed the long-planned flash-off. Its user interface for routers based on it was suddenly no longer accessible.

On the iPhone 7 a user should, according to one Entry 9to5Mac now runs the Ubuntu operating system. The jailbreak was therefore with the checkra1n tool realized that the vulnerability checkm8 exploits. "After a really long and complicated process, the user successfully managed to run the arm64 version of Ubuntu 20.04 (a popular Linux distribution) on the iPhone," it says. In addition, a Video, which shows the boot of the system. I have embedded this for you in the following. At the end you can see a login screen; the system itself or its use is not shown.

Lately I still got on that 10th anniversary of the Mac App Store pointed out. The iTunes app went through my fingers. But iFun has one for that Post made for it. There you will not only find a collection with the various app icons that have come together over the past two decades. A screenshot of a rather old user interface of the software is also shown. In between there are backgrounds, details about the development and more. It is shown, among other things, that Apple did not create iTunes from scratch: “Apple by no means invented iTunes itself. The iTunes 1 introduced at the time was just a revised version of the SoundJam MP MP3 player bought by Apple a year earlier.

So many Nintendo birthdays: 25 years of Pokémon

The first Pokémon games for the Game Boy appeared in Japan in 1996. That was 25 years ago. With that and with the 35th birthday of Super Mario in 2020 and the 35th birthday of the Zelda series (also in 2021), Nintendo has its hands full. Many collaborations are planned for the Pokémon anniversary - musically, for example, with Katy Perry. In addition, there should be new and reissued video games, special trading cards, fan products and so on. An overview Is there ... here on the official Pokémon website. There is also current news about the new "Pokémon Snap“For the Nintendo Switch.