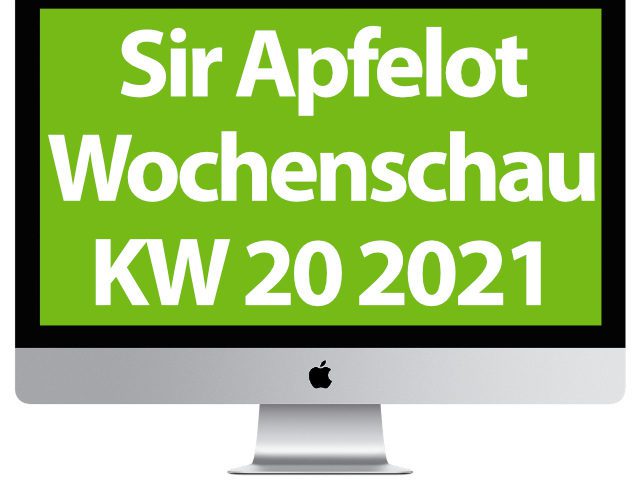 Today, Friday, it's time again for a themed Sir Apfelot newsreel. In the Apple and Tech messages that caught my eye in calendar week 20 of 2021, you will find a colorful mix this time again. In addition to a few Apple topics, there are graphics cards and crypto mining, Twitter, space junk, wind-powered street lights, the upcoming Apple MacBook Pro with M2 chip and much more. What is your news of the week? Feel free to leave a comment on the topic;)

Graphics cards are popular components among people who want to generate and multiply crypto currencies such as Bitcoin or Ethereum. In recent months and years there have been repeated reports of entire GPU farms in which dozens of these components were busy "mining" digital currencies. As it is now but in one Entry by heise online means that the new Nvidia GeForce models RTX 3080, RTX 3070 and RTX 3060 Ti are to come onto the market as so-called "low hash rate" graphics cards. These are intended to curb the mining of the crypto currency Ethereum. "[...] If the driver recognizes the memory-heavy Ethash algorithm, the computing power is halved", is it [called.

Relief of the environment with crypto mining as early as 2021

The “mining” of digital currencies is a rather resource-guzzling undertaking due to the massive arithmetic operations and the constant exchange of nodes in the blockchain network. Therefore, the Ethereum Foundation has now decided to change the system faster than previously planned. Instead of 2022, the Proof-of-Work (PoW) model is to be changed to Proof of Stake (PoS) in 2021. What this means in detail and what positive influence it means on the amount of energy required is also included in heise online Entry listed. "The energy required to confirm the blocks should then suddenly drop by at least 99,95 percent", is it [called.

The question of liability when space debris crashes

"Who is liable if space junk falls on your house?“Asks the specialist magazine t3n in the title of a current issue Contribution. However, the introduction already states that answering the question is complicated. Nevertheless, it should be provided - because ESA, the European space agency, estimates the rocket remains and disused satellites in Earth orbit at over 8.000 tons. In general, if space junk falls on your own house, you can invoke the 1967 United Nations Liability Convention. To do this, you have to report the damage to the government. However, the space debris is not tracked, so that in case of doubt it cannot be allocated and the nation causing it cannot be held liable.

Papilio - street lamp with an environmentally and resource-saving concept

The t3n online magazine also deals with a completely different topic for the residential area. In one of this week's Items the wind-powered street lamp "Papilio" is presented. This should not only use renewable energies for electricity generation, but only light up when it is really needed - i.e. when someone walks along under it. The concept comes from the art student and designer Tobias Trübenbacher from Berlin and is still in its infancy. Nevertheless, it shows the areas in which the climate crisis can be rethought. You can find details in the linked source.

Batteries and rechargeable batteries are by no means fully developed. And better solutions have to be found precisely because of electromobility and a wide variety of mobile technology. Accordingly, there is one at heise online Items to so-called solid-state technology. For them, the underlying chemistry should be changed, switching from liquids to solids. In this regard, Xin Li from Harvard University in Cambridge is quoted as saying: "The lithium solid-state battery is considered the holy grail of battery research because of its high storage capacity and energy density". It is also emphasized that the charging time of such batteries should be significantly shorter. Further details and technical background can be found in the source.

With iOS 14.5, Apple introduced the need for apps that allow users to track and thus e.g. B. To ask for personalized advertising. I myself have seen such requests, which you can and should of course refuse, on Facebook, eBay classifieds and other apps. It has not yet been shown to me on Twitter. But that can change after an update of the app, such as 9to5Mac berichtet. In addition, people and groups can be verified again on Twitter and get the "blue check mark". Heise online has who, how and why at this point summarized.

The backup app Carbon Copy Cloner (CCC) for the Apple Mac is now available in version 6. This offers the option of creating bootable backups on both Intel Macs and Apple computers with an M1 chip. In addition, the "Quick Update", which adds updates to existing backups, should now be up to 20 times faster. Before that, a new overview should show which changes are to be adopted. There was also screwing on the surface; with some adjustments and a dark mode. MacRumors has details and screenshots at this point collected.

Several sources are currently reproducing the rumor that the new Apple MacBook Pro with a 14- and / or 16-inch display and possibly with the M2 chip will appear this summer. For this it could be presented in the context of the WWDC21 keynote. The rumors go back, among other things, to Mark Gurman (Bloomberg), who speaks of a 10-core CPU and also reports of a GPU with either 16 or 32 cores. The RAM could be up to 64 GB. There are also previous reports that the upcoming MacBook models should offer more connections again. Sources are MacRumors (English) and iFun (German).

This weekend: Rent films on Amazon Prime Video for only € 0,99