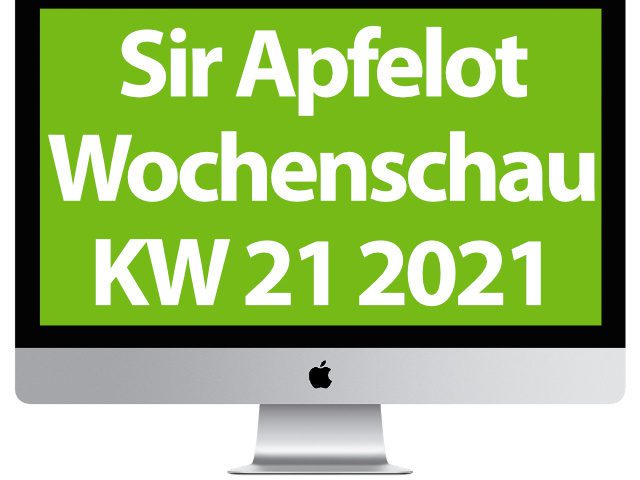 The next week is coming to an end, which means here in the blog that it is time again for a new edition of the Sir Apfelot newsreel. Today, Friday, I'll show you which Apple and tech news caught my eye in calendar week 21 of 2021. The following topics are included: wireless charging of electric cars, Windows Development Kit with ARM chip, ZDF study on media use in Corona times, Apple and crypto currencies, rumors about new Apple hardware, Apple Keynote on June 7th and a lot more.

Messages in the Sir Apfelot newsreel of calendar week 21 in 2021: Wireless charging of e-cars, Windows Development Kit with ARM chip, ZDF study on media use in Corona times, rumors about the new Mac mini, Apple keynote on June 7th and much more.

Charge electric cars wirelessly with an efficiency of 90%

Especially if cars are to drive autonomously, the battery has to be charged without connecting a cable or similar hurdles. The trade magazine Edison shows in this context in one Post a solution. According to this, an inductive charge with an efficiency of 90% should have been implemented in the course of battery research. The Institute for Automation and Communication in Magdeburg was also involved in the development of the "Feedbaccar" project. Further details and additional technology that can be used for e-mobility can be found in the linked source.

Development Kit from Microsoft and Qualcomm Snapdragon: Windows 10 on ARM

Not dissimilar to the Mac mini, which was issued for developers to explore the Apple Silicon and the possible app developments on it, is the current Windows counterpart. According to one Post von Golem, in which one refers to official information, the device should be available from summer 2021 and already bring some developer tools on board. An x64 emulation for the use of software for the "old" processor architecture should be possible. Golem assumes that the Snapdragon 7c Gen2 is in the developer kit as a SoC (System on a Chip). You can find more details behind the link.

ZDF study: media use during one year of the coronavirus pandemic

You can find a summary of the new ZDF long-term study in one Entry from iFun. Among other things, it explains which groups access which digital media: "Child carers use media libraries more than average. The GenZ does not differentiate between YouTube and media library. The linear offer is still very relevant for almost all users", is it [called. In addition to YouTube, television and media library, GenZ is also way ahead when it comes to media consumption via Instagram or TikTok. If you want to take a look at the study yourself, have a look here:

If you want to claim compensation from Deutsche Bahn for a train delay or a canceled trip, it will soon be much easier. From next week there will be a function for this in the official app "DB Navigator". The iPhone ticker reports at this point. "[...] From June 1, 2021, it should then be possible to apply for compensation in the same way that four out of five customers already use to book their tickets and take less than five minutes", is it [called.

Already almost two months ago the period for this year's World Wide Developers Conference announced by Apple. WWDC21 will take place from June 7th to 11th - like last year, it will be completely digital again. But now Apple has shared new information, including the exact date for the kick-off keynote. As was to be expected, this will take place on June 7, 2021, at 19:00 p.m. local time. In addition to information on the future of iOS, iPadOS, macOS, tvOS and watchOS, many new hardware revelations are expected. For example, a 14- and / or 16-inch model of the MacBook Pro with an M2 chip will be shown. What has been established so far can be found in the Official press release read.

At least that's what the iPhone ticker says in one Entry. However, it is also admitted that so far only little information about Apple's new operating systems has leaked out. For information about iOS 15, a tweet is discussed that announces a few adjustments in dark mode, for messages, in the user interface and so on.  In addition, food tracking is to be introduced as a new health feature. We will not find out whether that is all and what iPadOS, watchOS, tvOS and macOS will soon offer us until June 7th.

Apple is looking for a manager with crypto experience

That is the headline of MacRumors here. and refers to a official job advertisement from Apple. It is not immediately clear what it is about, because the heading and description of "Alternative Payments" is. When it comes to job requirements, however, the technology giant from Cupertino is a bit clearer: "5+ years experience working in or with alternative payment providers, such as digital wallets, BNPL, Fast Payments, cryptocurrency and etc.“- If the advertisement is no longer available when you want to look at it, you can this copy from the Internet Archive. It is not clear whether Apple will allow Bitcoin and Co. for its digital wallet or start with a currency itself.

Two reports from MacRumors are currently showing the in-ear headphones called "Beats Studio Buds", which Apple may soon bring to the market as wireless Bluetooth earplugs. In the first message a housing leak is shown and this is accompanied by render graphics and a video from Twitter. The second message shows the headphones in the wild. Because it contains photos in which the basketball player LeBron James is said to be wearing the earplugs before the release. "James appears to be wearing the Beats Studio Buds in white, based on the shape and design of the earbuds in his ears", is it [called.

In addition to a new MacBook Pro, which should offer more connections in addition to the M2 chip, there could soon be a desktop counterpart in the form of the Mac Mini. In addition to the magnetic connection for the power cable (known from the current iMac), this should also offer 4 USB-C or Thunderbolt connections, two USB-A ports, a network connection and an HDMI socket. That shows MacRumors at this point with reference to a new "Front Page Tech" video by Jon Prosser. The Apple leaker is not always wrong and could also be right here with the new Mac mini.