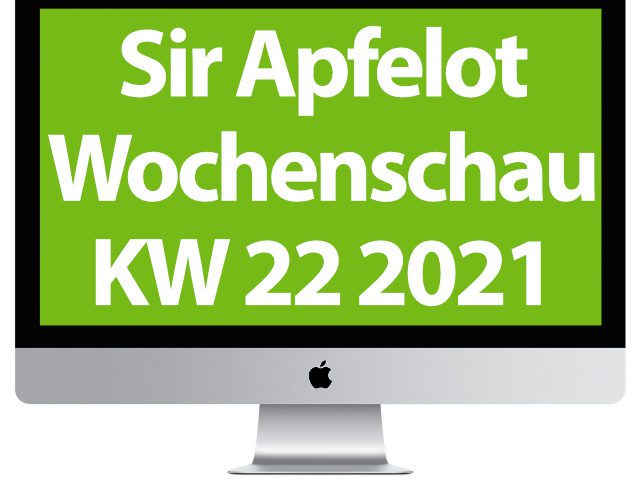 One week follows the next and we are approaching the middle of the year. The fixed point on Friday is of course the Sir Apfelot newsreel. This time I'll show you which Apple and tech news I noticed particularly in calendar week 22 of the year 2021. The following topics are included: important update for OBS Studio, subsidy for the Starlink acquisition, Google's earthquake warnings outside the USA, Vodafone with a new innovation center, Apple with AirTag update, rumors about the upcoming MacBook Pro and guesswork new Nintendo Switch (Pro).

In the Sir Apfelot Wochenschau for calendar week 22 of the year 2021 there is, among other things, this: Update for OBS Studio and AirTags, Google now warns of earthquakes across the board, rumors about MacBook Pro and Nintendo Switch Pro and a lot more.

Heise online wrote about an interesting ruling by the US Supreme Court this week. In the Entry it concerns the interpretation of the Computer Fraud and Abuse Act (CFAA) and the formulations contained therein regarding access and usage restrictions. So far, these have also been applied to those cases in which the accused had access rights, but exceeded them or simply used them outside of the specifications or guidelines. Employees who use company computers to send and read private messages could have been convicted as hackers. Further background information, information on the underlying case and the effects of previous judgments (regarding Aaron Schwartz) can be found in the source.

I have that in one Post read by iFun. The new function, which is implemented in the free app via update, can now be used to undo accidental deletion or modification of painstakingly compiled scenes. In case you don't know what OBS  Studio is: this is a streaming app with which you can combine videos, images and animations from various sources (webcam, other cameras, hard drive, monitor display, etc.) into one video output. The free app for macOS and Windows can then be set as a virtual webcam and used for Twitch streaming, webinars and the like. I can recommend the app. After a short training period, it is easy to use.

"Federal Minister Scheuer and Elon Musk met a few days ago on the construction site of the Tesla plant in Brandenburg“, It says in the introduction to one Entry from golem. From this it should then have emerged, among other things, that the federal government is now promoting the purchase and assembly of hardware that is useful for the use of satellite Internet. The grant is 500 euros and is therefore sufficient for B. for the standard equipment (receiver dish and router) from Starlink. "A measurement by the Federal Network Agency on April 16, 2021 showed a runtime of 20 ms, a download of 278,56 Mbit / s and an upload of 66,47 Mbit / s“, It says in the linked source, in which you get more information and background.

Google's earthquake warnings outside of the US

Google has a feature up its sleeve for Android users in the USA that warns them of earthquakes and can also perceive them via the device sensors. It has been in use since 2020. Now the function for earthquake warnings is also offered beyond the USA. Early warning messages should therefore now also be available in Greece and New Zealand. It says in the official Blog Post from Google (freely translated):

The early warnings in New Zealand and Greece work with the accelerometers built into most Android smartphones to detect seismic waves that indicate a possible earthquake. When the phone detects a shock that it thinks is an earthquake, it sends a signal to our earthquake detection server, along with a rough location where the quake occurred. The server then takes this information from many phones to find out if an earthquake is happening, where it is and what strength it is.

Vodafone with 5G and 6G innovation center in Dresden

Vodafone has analyzed the applications from eight European cities that wanted to host the new competence center for 5G and 6G mobile communications. These applications could be submitted since January 2021, such as the Macerkopf berichtet. According to this source, Vodafone has also opted for the Saxon state capital Dresden. "Vodafone's global competence center for research, development and innovation is to be established here shortly. With a clear focus on future technologies such as 5G and 6G - as well as on specific applications in the areas of autonomous driving, connected agriculture, chemistry and construction", is it [called. It has not been made clear whether work is also being done to offer 5G nationwide in Germany so that private users can benefit from it.

Scinexx has one for this this week Post released. Accordingly, Ingenuity did not adhere to NASA's control requirements on the sixth flight, but went off course and tumbled in the thin Martian atmosphere. However, the copter did not crash due to on-board compensation systems. The navigation camera or its memory was named as the reason for the jerky flight and the tilting in the air. One of the 30 frames recorded and analyzed per second was lost. As a result, the time stamps in the following images were no longer correct and the automatic system of the aircraft was mixed up. During the landing, the error could be ignored, so that a safe touchdown was possible.

AirTag update: clandestine tracking should be made more difficult

Since the Apple AirTags were introduced, there has also been criticism of the trackers with ultra-broadband radio. Because theoretically they can be used to secretly track people and their whereabouts and routes. Instead of notifying you with an acoustic signal after three days when the AirTag has been disconnected from the owner, a tone is now played after a random period of between eight and 24 hours. In addition, Apple is to work on an Android app that makes the “Where is?” Functions usable on devices with the Google operating system. Source for this info is a Post at iTopNews.

On Monday, June 7th, 2021, WWDC21 starts with a keynote from Apple Park. As part of the video transmission, updates for operating systems such as iOS and macOS are expected, but also new hardware. However, new MacBook Pro models may only be introduced but not yet made available. Because the mini-LED components for the 14- and 16-inch displays are not expected to be delivered until the third quarter of 2021. So the new MacBook Pros could appear as "late 2021". Information on this was provided by a this week Entry at the Macerkopf.

Yesterday, hashtags were trending on Twitter for “New Nintendo Switch” and “Nintendo Switch Pro”. The reason was a leak that probably originated from a dealer. This listed the new version of the Nintendo Switch (first model appeared in 2017) as a device presented on June 3, which could be pre-ordered from June 4. That day is today and so far there is still no idea of ​​a new Nintendo console, let alone ordering options. However, if there is a presentation in the course of the day, there will be an update here. It remains exciting!